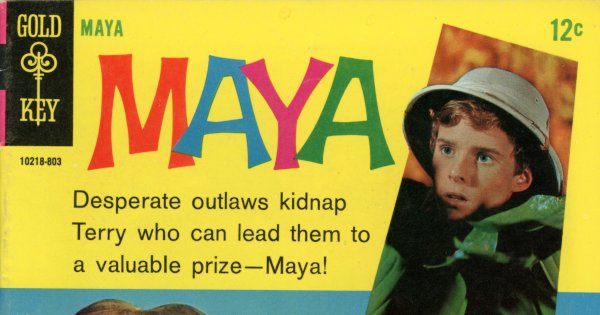 This is the first and only issue of Gold Key’s comic book based on NBC’s short-lived adventure drama Maya. Based on the 1966 film of the same name, Maya ran for 18 episodes during the 1967-1968 season, airing Saturdays from 7:30-8:30PM ET. Both the movie and TV show starred former Dennis the Menace actor Jay North alongside Indian actor Sajid Khan. There are no references to the TV show anywhere in the comic.

There’s no date printed on the cover, only a copyright date of 1967 included in the indicia. According to the Grand Comics Database, the issue is dated March 1968.

Here’s a quick summary of Maya, found on the inner front cover:

Through the vast subcontinent of India wander two boys, Terry and Raji, on a dogged search for Terry’s father, a hunter believed slain by a savage tiger. Through danger and despair, they manage to carry on only because of Terry’s unshakable faith, Raji’s resourcefulness and the incredible elephant Maya.

The issue features a single story titled “Bandit Country” that is split into two parts. Part 1 (“The Nest of Fear”) sees Terry and Raji escape from a black panther, only to run into a band of outlaws. Terry is kidnapped but Maya gets away. Raji, meanwhile, fell off a cliff while trying to steal an egg for dinner. Can Maya save him? Also, the Maharajah worries about Terry and heads out into the jungle to find him.

Part 2 (“Danger Route)” begins with Maya rescuing Raji. The two then rescue Terry but are cornered by the bandits. Just then, the Maharajah and his men arrive and the bandits turn their attention away from Terry and Raji. With the help of Maya, the boys save the day.

The story is decent and likely similiar to episodes of the TV show. Whether an elephant like Maya could actually remember everything she remembers is a debate for elephant experts.

In between the two parts of the story are several Gold Key features: Art Gallery, Picture Dictionary, Chuckle Time, and Quick Takes. At the end of the issue are two more: Mini-Comics and Keys of Knowledge. Black and white pictures from Maya are printed on both the inner front cover and inner back cover. There’s also a Maya Pin-Up on the back cover.

Although I’ve never seen the movie or any episodes of the TV show (which came out on DVD in 2014), I watched some clips on YouTube before reading this comic book for the first time. As is often the case with comic books based on TV shows, the characters on the page look very little like their small screen counterparts.

Do you remember watching Maya on NBC during the 1967-1968 season? Did you read this comic book? Hit the comments with your thoughts.