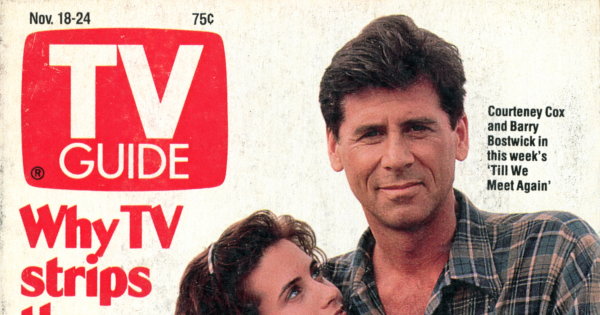 This week’s cover article is unnecessary. Nobody should be surprised network television can’t faithfully recreate the lengthy and racy sex scenes found in Judith Krantz’s novels. She doesn’t always like it when a particular scene is changed for television, but she “accepts the constraints of TV.”

I read the profile of Courteney Cox and learned she’s a motorcycle enthusiast (back in 1989, at least) and owns a Hondo Rebel. Curiously, although the article discusses Judith Krantz’s Till We Meet Again, it doesn’t talk about any of the sex scenes to tie in with the cover article. There’s is a brief mention of her role in short-lived Misfits of Science.

I skimmed the profiles of Willard Scott and Connie Sellecca. I don’t watch The Today Show and definitely didn’t watch it when Willard Scott was the “wacky weatherclown.” As for Connie Sellecca, I’m a fan of The Greatest American Hero but otherwise haven’t seen much of her work. Apparently, she loves practical jokes, the darker the better.

I skipped the articles about tabloid television, a new music video from The Rolling Stones, football huddles, and the one-page “The Scoop” article about The Kids in the Hall.

Prices from the Video Cassette Report for movies on VHS: Batman ($24.98), Elves ($79.95), K-9 ($89.95), Out of the Darkness ($79.95), Sleepaway Camp 3: Teenage Wasteland ($79.98), Under the Biltmore Clock ($79.98). Cheers ‘n’ Jeers praises Pee-wee’s Playhouse “for continuing to be the only truly innovative alternative in a Saturday morning television schedule full of badly animated dreck and thinly veiled half-hour commercials,” criticizes the overuse of the California Raisins, laments the outdated opening credits for The Young and the Restless, and applauds USA Network for airing Lost in Space reruns.

Robert MacKenzie reviews “A Tale of Two Cities” on Masterpiece Theatre, which “finally does the novel justice with an atmospheric production, a graceful script and controlled performances.”

There are seven news reports this week. The first discusses the new (and untitled) ABC sitcom starring Dr. Ruth Westheimer. [ABC ultimately passed on “Dr. Ruth’s House” but aired the pilot in June 1990.]

Other reports: ABC has cancelled Chicken Soup due to low ratings; Paramount and MCA are still hoping to launch a fifth broadcast network; Wolf and Major Dad are retooling; TV shows based on Uncle Buck, Parenthood, and Working Girl are all in the works; PrimeTime Live isn’t doing well in the ratings; CBS has given a 13-episode commitment to a sitcom called Dad’s a Dog from producer Barry Kemp.

Three of the six letters respond to an article about ABC’s Richard Nixon telefilm The Final Days, published in the October 28th issue. Here are two:

TV has truly exceeded the limits of decency by trying to make a martyr out of Richard Nixon. The Watergate coverrup and the end of his Presidency were his own doing. The man is a criminal, not a respectable former President.
Gregg T.
Holyoke, Mass.

The media just can’t stop “kicking Nixon around.” The excuse for making “The Final Days” is the fact that a whole generation doesn’t know about Watergate. Let me tell you, there is a whole generation that doesn’t even know the name of the current President, the Vice President, the two senators who represent them in Washington or the representative from their district.
Grace A. S.
West Mifflin, Pa.

9PM ABC B.L. STRYKER (CC)–Crime Drama; 2 hrs.
In the second-season opener, Stryker (Burt Reynolds) works in tandem with an FBI agent who was once a rival in police work and love. Now, they both have an interest in a wealthy philanderer who’s into polo ponies and financial scams.

NBC (4) (5) (22) SISTER KATE (CC)–Comedy
Sister Kate (Stephanie Beacham) becomes a mother–to an infant abandoned at the orphanage. Meanwhile, the kids have to come up with $200 to replace a vase they smashed in Kate’s office.

8:30PM ABC (2) (6) (12) HOMEROOM (CC)–Comedy
Daryl (Daryl Sivad) deals with science projects in class while performing experiments of the heart at home, where he fixes Phil (Bill Cobbs) up with a fellow teacher (Madge Sinclair).

Monday, November 20th, 1989
8:3PM CBS (7) (9) (10) FAMOUS TEDDY Z (CC)–Comedy
Teddy (Jon Cryer) tries to save his house after someone bites at the price he was just fishing with, while Al Floss (Alex Rocco) tries to save face after making a boffo deal for a dead client.

10PM NBC (4) (5) (22) MANCUSO, FBI (CC)–Crime Drama; 60 min.
Mancuso (Robert Loggia) investigates the theft of plutonium from a nuclear-weapon plant, but he nearly melts down when evidence points to the Israeli Secret Service as the culprit.

Another week of November sweeps, plus Thanksgiving specials, but viewers still had the opportunity to watch new episodes of several of the (ultimately) short-lived TV shows on the air. Within the pages of TV Guide, it was once again slim pickings.

That’s it for this issue. Check back next week for my review of the November 25th, 1989 issue of TV Guide. As always, hit the comments with any thoughts or reactions.