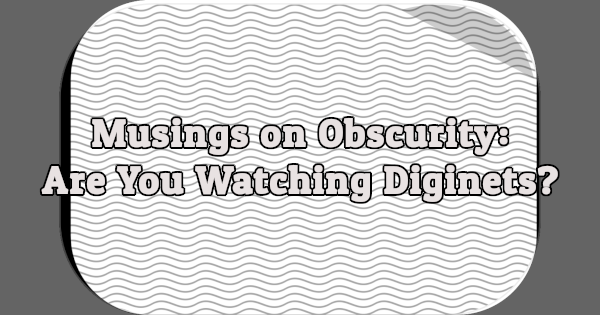 I’ve been writing about diginets for years. Several times I’ve expressed concern that there are too many but they keep coming even as little-watched cable channels start disappearing. Pivot folded last year and Esquire Network will shut down later this year (yet somehow Cloo continues to survive). Despite the fact that many diginets are available in more than 50% of households–and some in more than 80% or 90%–I suspect most people have no idea what they are.

The Rise of the Diginet

Unless you watch TV over-the-air, you may not be familiar with diginets, which are sometimes also called multicast networks. They were made possible by the transition from analog to digital television back in 2009. TV stations are able to broadcast multiple digital “subchannels” rather than just one analog channel.

This means an ABC station can offer ABC programming on its “primary” channel while also affiliating with one or more digital specialty networks.

Your cable company may also carry some or all of the diginets available over-the-air where you live.

For the most part, I only pay attention to classic TV diginets like MeTV and Antenna TV. But it’s becoming harder and harder to keep track of them and the programs they air. As far as I know, there is no comprehensive list of all the digital specialty networks that exist.

There’s also Spanish-language diginet TeleXitos and public TV diginets Create and World, plus the new PBS Kids Channel. At least one more diginet is launching later this year, an action-oriented network called Charge! that will feature TV and movies from MGM.

Obviously, the companies behind all these diginets are either making money or think they’ll be able to make money at some point. Only five diginets are currently rated by Nielsen: MeTV, Grit, Bounce TV, Escape, and Cozi TV. For the week ending January 22nd, they collectively averaged 1.71 million viewers in prime time. MeTV drew the most viewers (590,000) and Cozi TV the least (190,000). There is an audience, it seems, but it’s a small one.

How Many Diginets Do You Get?

The last time I checked, I get the following diginets: Antenna TV, Bounce TV, Comet, Cozi TV, Escape, Grit, Justice Network, Laff, and This TV. Also, Create and World plus two local public TV diginets. I don’t watch any of them regularly and haven’t since I finished watching It’s About Time and My Mother the Car on Antenna TV in late 2015 or early 2016. I wish there was a getTV affiliate in my area because it airs quite a few short-lived and pseudo-obscure TV shows.

If you watch TV over-the-air, it’s a good idea to occasionally rescan and look for new channels. That’s how I discovered Comet last year. It later showed up on cable as well, but I only found out because I was channel surfing.

How many diginets do you get and, more importantly, how many do you watch on a regular basis (if any)? Are there any you wish were in your area? Are you worried that there are too many diginets? Hit the comments with your thoughts.

19 Replies to “Are You Watching Diginets?”