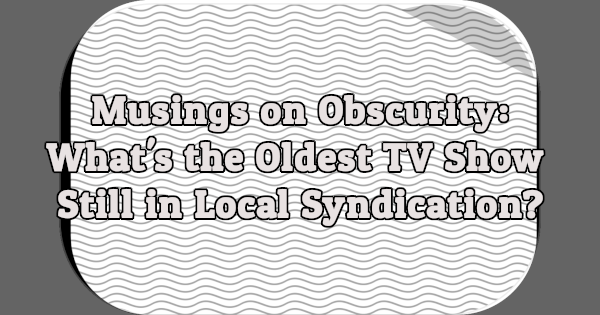 This is a question I’ve been mulling over for a few weeks. I don’t know that I’m ever going to get an actual answer. Is there a definitive list of TV shows currently airing in local syndication? If so, I haven’t found it. However, I believe I Love Lucy may be the oldest TV show still in local syndication. It premiered on CBS more than six decades ago in 1951. Depending on where you live, you can still watch it on a local TV station.

(If you watch The Big Bang Theory on TBS, that’s an example of cable syndication.)

There are different ways to schedule shows in local syndication. Some only air on weekends while others air every weekday in the same time slot (the latter is referred to as daily or strip syndication). Certain popular shows may have two syndicated packages: one airing daily on weekdays and the other on weekends.

Over the past decade, it’s become less and less common to see network dramas sold into local syndication. Why? Serialized dramas are a tough sell. I seem to recall Desperate Housewives and Lost flopping hard in off-network syndication. Procedurals tend to perform better.

Blue Bloods and The Good Wife may be the most recent network dramas to enter local syndication. Both premiered on CBS in 2010 and began airing their off-network weekend runs in September 2014.

Sitcoms are far more popular off-network. I believe the most recent network sitcom to enter local syndication is ABC’s Last Man Standing. It premiered on the network in 2011 and made a delayed debut in syndication last September.

Syndication ratings take an extra week or two for Nielsen to process. The most recent ratings available, via TV By The Numbers, are for the week of January 30th through February 5th. The chart lists the Top 25 syndicated shows. Only seven are off-network shows. Here they are, listed by year they premiered on network TV:

Family Guy, The Big Bang Theory, and Modern Family all air daily and on weekends. As TV By the Numbers points out, The Simpsons also airs in local syndication (and has been since 1993, I believe). It doesn’t show up in weekly ratings because there is no national advertising.

Broadcasting & Cable also covers syndication ratings. Its report for the week of January 30th through February 5th includes ratings for several additional sitcoms. Once again, I’ve listed them by the year they premiered on network TV:

Clearly, and not surprisingly, the majority of the most popular off-network TV shows are from the 2000s and 2010s.

The website for Twentieth Television (which syndicates The Simpsons and King of the Hill, among other shows) reveals that M*A*S*H is apparently still being offered in local syndication.

However, it’s the website for CBS Television Distribution that offers the most information. The list of more than 50 available shows ranges from I Love Lucy, The Honeymooners, and Bonanza to Cheers, Everybody Loves Raymond, and Ghost Whisperer.

Classic TV shows from the 1950s and 1960s available from CBS Television Distribution include the following:

Through the website, you can find out if any of these shows are airing in your state. For example, I Love Lucy can be seen on seven stations in Alabama, 11 in California, three in Kentucky, two in Massachusetts, one in North Dakota, seven in Texas, and six in Wisconsin. Plus many other stations in many other states.

A quick check of my local television listings reveals The Simpsons and Seinfeld to be the oldest TV shows airing in local syndication. Both sitcoms premiered in either 1989 or 1990, depending on your point of view. Other sitcoms include Friends, The King of Queens, The Big Bang Theory, Raising Hope, Rules of Engagement, Modern Family, 2 Broke Girls, and How I Met Your Mother.

The oldest off-network drama in my area appears to be CSI: Miami. It debuted in 2002. Other dramas include Person of Interest, Rookie Blue, Blue Bloods, Elementary, and Bones.

Do you still enjoy watching TV shows in off-network syndication? What’s the oldest TV show in local syndication where you live? Hit the comments with your thoughts.