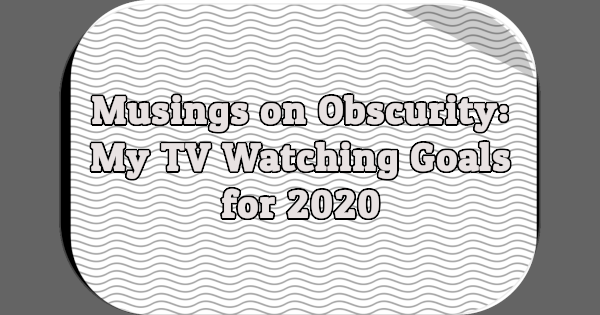 Can you believe January is nearly over? It feels like 2020 only just started and yet here we are almost 1/12th of the way through the new year.

My big accomplishment last year was watching all 13 episodes of Man from Atlantis (NBC, 1977-1978). It was not easy. Most of the episodes were dull and plodding and a chore to sit through. Even the handful of episodes with interesting premises were ruined by weak stories and/or weak acting.

I watched the pilot telefilm and two episodes of one season wonder Lucas Tanner (NBC, 1974-1975) starring David Hartman. I’m slowly working on an article about the show and took a lot of notes. Unfortunately, I don’t have access to any additional episodes, although I do have a copy of a script for a third episode that I’ll read at some point this year.

What else? I rewatched a recent obscurity, the short-lived sitcom Running Wilde (FOX, 2010). The network only aired nine of the 13 episodes; the others later aired on cable channel FX. I know I watched all the episodes FOX aired back in 2010 but I can’t recall if I caught the episodes on FX. It’s a funny show and I enjoyed rewatching it.

That’s pretty much it for short-lived or obscure TV shows. I had planned on tackling Coronet Blue (CBS, 1967) or The Immortal (ABC, 1970-1971) but I subscribed to Hulu in January and quickly got sucked into rewatching two long-running animated comedies: Futurama and King of the Hill. Watching those two shows ate up a lot of my free time.

On the first day of 2020, I started watching the second season of The Rebel (ABC, 1959-1961) on Amazon Prime. I watched and enjoyed the first season in 2018 but had to wait until the second season started streaming to watch it. I’m more than halfway through.

Once I’ve finished The Rebel, I’ll start watching Coronet Blue on DVD. Then comes Blondie (NBC, 1957) on DVD. After that, I’ll probably rewatch recent obscurity Surface (NBC, 2005-2006) on DVD. If I get through all of those shows, next on the watch list is The Immortal.

What are your TV watching goals for 2020? Will you be enjoying any obscure TV shows this year? Hit the comments with your thoughts.

13 Replies to “Musings on Obscurity: My TV Watching Goals for 2020”