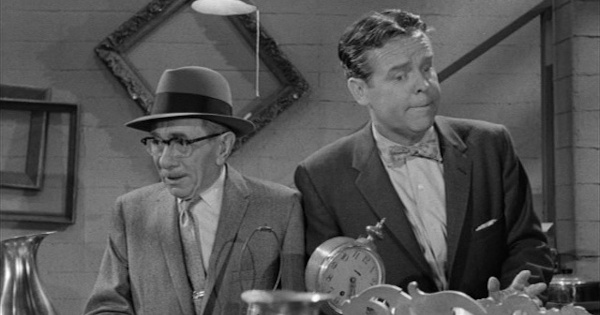 The first of two TV sitcoms based on Chic Young’s long-running comic strip of the same name, Blondie debuted on NBC in January 1957. Arthur Lake, who played Dagwood Bumstead in a series of 28 movies between 1938 and 1950, returned to the role for the small screen. Pamela Britton co-starred as Blondie. A total of 26 episodes aired.

Learn more by reading my in-depth article about Blondie on Television.

Mr. Dithers thinks Cora is a kleptomaniac and asks Dagwood to talk to Blondie. But Blondie has a secret: she’s storing boxes of items Cora collected for a rummage sale. Dagwood can’t know because he’ll tell Mr. Dithers, who can’t find out Cora has volunteered for yet another event for another club. When Mr. Dithers learns Dagwood hasn’t been allowed in his own basement, he assumes Blondie is helping Cora with her stolen loot.

He sends Dagwood home to take a look in the basement. Cora stops by with more items for Blondie to hide and Dagwood misunderstands. He and Mr. Dithers sneak into the basement and are horrified to find mirrors and statues and clocks they recognize as belonging to various neighbors and friends. To keep their wives out of jail, Mr. Dithers insists they have to return everything. In Dagwood’s words, they need to be “thieves in reverse.”

Herb agrees to help and provide the use of his station wagon. That night, with Herb’s help, Dagwood and Mr. Dithers load all the “stolen” items into Herb’s station wagon. Moments later, Cora stops by with another box. When Alexander brings it down to the basement, he discovers the other boxes are missing. Cora assumes they’ve been stolen and calls the police. Cookie and Alexander follow Daisy and the puppies in the hopes of finding the crooks.

The police receive several calls about prowlers and robbers from the people Mr. Dithers and Dagwood are returning the “stolen” items to. The station wagon gang has struck again.

Daisy and the puppies lead Cookie and Alexander to a house where Dagwood and Co. are trying to return a lamp. A police officer spots the station wagon and takes everyone into custody. He leads them back to Dagwood’s house where Cora reveals the truth about the rummage sale. Before she identities her husband, she forces him to insist that she continue with her club work. Blondie, meanwhile, gets Dagwood to agree to buy her a new hat before she’ll identify him. Herb begs the police officer to take him to jail, he can’t afford the mink coat his wife wants.

The next morning at the office, Dagwood discovers Mr. Dithers is sitting all the boxes for the rummage sale in his office. That means Mr. Dithers will be using Dagwood’s office for the next few days.

Like so many episodes of Blondie, “The Rummage Sale” revolves around scheming and misunderstanding. In this instance, it’s Blondie plotting to keep Dagwood in the dark about the items she’s keeping in the basement for Cora’s rummage sale. If only poor Dagwood could’ve been trusted with the truth, Mr. Dithers wouldn’t have mistakenly believed Cora and Blondie were common thieves, Herb wouldn’t’ have been roped into helping return the “stolen” items, and the police wouldn’t have spent countless hours tracking down a gang of robbers.

Of course, had Blondie simply told Dagwood about the rummage sale, she and Cora wouldn’t have been able to blackmail their husbands in return for identifying them to the police. Blondie keeps a secret from Dagwood, nearly gets him thrown in jail, and still somehow ends up with a new hat.

Like Blondie and Dagwood, Cora and Mr. Dithers need to work on their communication. As for Herb, he’s so afraid of what his wife will demand that he’d rather go to jail. The only characters who come out of this episode looking good are Cookie and Alexander. The two children keep their wits about them and smartly use Daisy and her pups to track down the so-called robbers.

According to a notice that appears before the start of this episode, “The Rummage Sale” features the “most noticeable audio degradation” of all 26 episodes of Blondie. I honestly didn’t notice any problems with the audio.

Purchase the complete series from Amazon and support Television Obscurities.

Do you remember watching Blondie on NBC in 1957? Did you watch this episode? Do you own the series on DVD? Hit the comments with your thoughts.