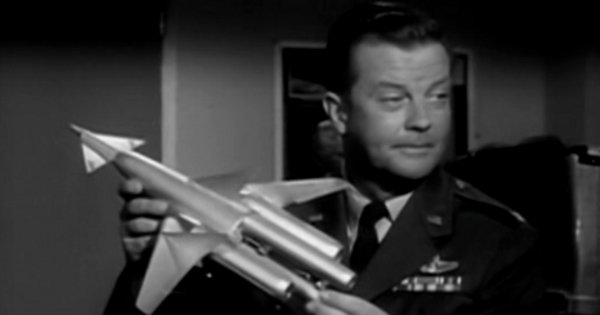 Men into Space – “Is There Another Civilization?”
Aired Wednesday, March 23rd, 1960 on CBS
Directed by Nathan Juran
Teleplay by William Templeton and Robert Warnes Leach
Story by Jerome Bixby

Men Into Space ran for a single season on CBS from September 1959 to September 1960. A total of 38 episodes were produced and aired. Oddly, the first 33 ran from September 1959 to June 1960 while the final five aired from August 1960 to September 1960. The sci-fi series featured just one regular character: United States Air Force Colonel Edward McCauley, played by William Lundigan. An experienced, dedicated, and careful astronaut, McCauley faced all manner of problems and disasters during the course of the series, from landing on the Moon for the first time to rescuing stricken astronauts to dealing with a stowaway aboard a rocket.

With Joyce Taylor as Mary McCauley

NOTE: The closing credits don’t include character names so I’ve referred to the Internet Movie Database entry for this episode.

The M-13 spaceship returns to Earth with a crew of three aboard after a deep space mission. Shortly before reentering the Earth’s atmosphere, the ship strikes an unidentified object. The crew manages to land safely. At first, Colonel McCauley, Major General Norgath, and other USAF personnel assume the ship hit a meteorite. They’re stunned when a piece of machined metal is found lodged in the meteor shield.

Colonel McCauley suggests the ship may have hit the wreck of another ship, perhaps another nation’s failure. A planned news conference is cancelled, a computer team is instructed to find an orbit for the wreck, and the piece of metal is sent to be analyzed. Later, Colonel McCauley is approached by an overzealous reporter named Stoddart who wants the real story about the M-13 mission.

When he returns home, Colonel McCauley’s wife also digs for information about the M-13. He assures her the crew is safe and sound. Seconds later, he receives a phone call and learns a member of the crew died in a car accident.

Within short order, the mysterious piece of metal is revealed to be similar to “pyrographite,” a mission is planned to send a ship to the wreck for a larger sample, and a second member of the M-13 crew dies in a boating accident. Stoddart writes a sensational article about the deaths that infuriates Colonel McCauley. Back home, his wife worries about the deaths and what they might mean.

Final planning is underway for the followup mission when Colonel McCauley learns the third and final M-13 crew member dies after being electrocuted in his bathroom. Nevertheless, the M-13 blasts off with Colonel McCauley in command. Upon reach the orbiting wreckage, a large fragment is brought aboard.

When they try to reenter the atmosphere, the temperature outside the ship gets to high and they have to abort. The piece of wreckage jars loose and its a struggle to secure it. Time and time again, the crew attempt reentry only to call it off when the temperature exceeds safe limits. Fortunately, they eventually land safely.

Later, during a briefing, Colonel McCauley reveals the piece of wreckage has been analyzed. It’s been orbiting the Earth for 500 years old. A rocket from another planet came to Earth during the 15th century and was destroyed. There’s more news: Captain Swanson got married.

“Is There Another Civilization?” is a peculiar episode. It feels very disjointed. In fact, it’s almost as if two completely different scripts were combined and this episode was the result. The first half focuses heavily on the mysterious deaths of the first crew of the M-13. But those deaths are never mentioned at all during the second half.

The second half of the episode deals more with Captain Swanson’s fear of the wreckage once it’s brought aboard the M-13. Mary McCauley, in turn, worries that something awful has happened to Captain Swanson when he’s late for dinner. She’s overjoyed when she later learns he got married.

I’m left wondering whether the three deaths were truly accidents or something more sinister. The plot point is dropped so abruptly, it’s startling. I’m also curious about why Captain Swanson reacts so oddly to the piece of wreckage. While outside the ship, he examines the wreck and becomes startled, almost terrified. Later, he wonders aloud if perhaps the fragment is alive. Is it more than just a 500-year-old fragment from an ancient spaceship?

This is the third episode of Men Into Space I’ve seen. It’s similiar in tone to the other two. Colonel McCauley is a serious astronaut who works hard but at home he can joke with his wife.

The M-13 spaceship as seen in space looks nothing like the craft later shown landing during the episode. Stock footage or military footage of an aircraft landing is used to depict the spaceship skidding across a runway.

In one scene, Colonel McCauley leafs through an Air Force magazine with a rocket on the cover. A prop or an actual Air Force publication?

Men into Space has never been officially released on home video. It currently airs on Comet TV every Saturday and Sunday morning at 7:30AM ET. Check your local listings.

Did you watch Men into Space during its original run in CBS or later when it went into syndication? Do you remember this episode? Hit the comments with your thoughts.

One Reply to “Retro Review: Men into Space – “Is There Another Civilization?””