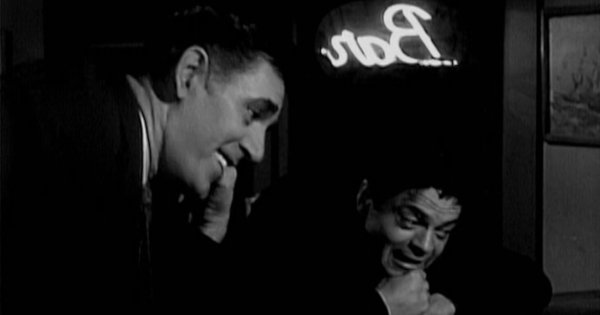 John Vivyan and Ross Martin starred in this half-hour adventure drama. Initially, the two ran a casino on a boat anchored safely in international waters. Halfway through the 1959-1960 season, worried sponsors forced the producers to remove most references to gambling. Although series ranked in the Top 25 for the season, CBS decided not to renew it.

Learn more about Mr. Lucky by reading my in-depth article about the show.

When Mr. Lucky’s friend Willie is released from prison, he comes to Lucky looking for help. He wants to go back in prison. It’s the only home he’s ever known. His girlfriend Mary, who he hopes to marry, works in the prison infirmary. Lucky agrees to help and comes up with a plan. He gives Willie the key to his post office box. After Willie is caught trying to steal Lucky’s mail, he’ll get ten years in federal prison. Easy, simple, foolproof.

Willie gets drunk that night at a bar and loses the key. Two men help him find it, but not before they make a copy of it. The next morning, Willie goes through with the robbery, gets caught, and happily goes back in prison. Unfortunately, his girl quit when she found out Willie had been released. Now he wants out. To make matters worse, checks worth $15,000 are missing from Lucky’s post office box. Andamo, who was against the plan from the beginning, thinks Willie stole it.

Willie swears he’s innocent. The box was empty when he got to the post office. He then remembers meeting two men at a bar. They must have robbed Lucky’s box. If Lucky can find the men, he can get his money back and clear Willie’s name so he can be with Mary.

Lucky and Andamo find the men at the bar and, after a fight, subdue them. They then go see a judge about getting Willie out of prison. It won’t be easy but the judge agrees to help under one condition: he wants to officiate at Willie and Mary’s wedding ceremony.

Days later, Lucky gets a call from Willie. He’s distraught. Mary is leaving. Lucky and Andamo rush over and find Mary packing. She can’t take it. Willie doesn’t want a wife. He wants a warden. He even put bunk beds in their bedroom.

Mary leaves. Willie doesn’t blame her. He understands. He asks Lucky for another favor. Find a way to get him back into prison. Andamo pulls Lucky out of the room and the two run off. They want nothing to do with Willie.

Guest star King Donovan is superb as Willie. He steals the episode. It’s almost as if John Vivyan and Ross Martin are the guest stars–and it’s their shown. Donovan is completely believable as a man who belongs behind bars not because he’s a criminal but because he can’t survive in the real world. His performance is able to overcome flaws in the plot. Why would Mary fall for a man like Willie? Why would she quit her job after he’s released? Why would Willie go to a bar and get drunk the night before “robbing” a post office box?

Many viewers probably assumed Willie and Mary got their happy ending once Lucky and Andamo succeeded in apprehending the real bad guys and the judge performed a quick wedding ceremony in his office. But there are still three or four minutes left in the episode. It’s a twist of sorts, one that leaves viewers wondering what will become of Willie. Is he going to come up with his own plan to get back in prison? Is he going to change his ways to win back Mary?

The other guest stars are forgettable and their characters contribute little to the episode. This is King Donovan’s episode and he does a fine job. It’s too bad never returned to Mr. Lucky. On the other hand, bringing Willie back would’ve diminished this episode.

Are you a fan of Mr. Lucky? Do you remember this episode? Hit the comments with your thoughts and recollections.