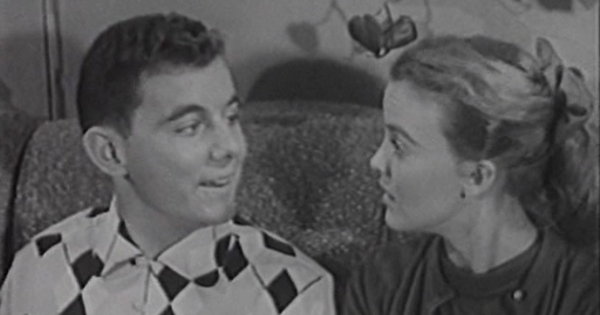 F. Hugh Herbert introduced teenager Corliss Archer in a series of short stories published in Good Housekeeping in 1942 or 1943. A radio program called Meet Corliss Archer began in January 1943 and ran until 1956. A Broadway play (Kiss and Tell) debuted in March 1943. Shirley Temple starred in a 1945 feature film based on the play and its 1949 sequel (A Kiss for Corliss, also known as Almost a Bride). Several comic books were published in 1948. Corliss came to television twice: first in 1951 and 1952 as a live sitcom on CBS and later in 1954 as a syndicated, filmed sitcom from Ziv Television Productions. The episode I’m reviewing today is from the Ziv series.

The episode opens with Corliss practicing her cheerleading routine in her living room. Both of her parents offer to demonstrate the proper way to lead a cheer. Her mother breaks a heel and hurts her back; her father snaps his suspenders. Dexter drops by the Archer house to see how Corliss is doing. She asks him to talk to Finly Roberts about coaching her. He’s the head cheerleader.

Dexter thinks Finly is a stuffed shirt and offers to coach Corliss himself. He calls cheerleading a cinch and gets up on a coffee table to show her a cheer. Instead, he puts a giant hole through the table. So, Dexter pays Finly Roberts to coach Corliss. But when Finly sees Corliss, he forgets all about money.

Right away, Dexter realizes he’s made a terrible mistake. He tries to keep the two of them apart but Corliss is eager to learn and ignores Dexter in favor of Finly. So does Mrs. Archer. Dexter turns to Mr. Archer for advice. He tells Dexter to beat Finly at his own game: if he’s smooth, Dexter has to be smoother. Sadly, Dexter’s attempt to be smoother than Finly backfires.

Later, Mr. Archer convinces Dexter to ask another girl to go to the drive-in with him because Corliss is at the theater with Finly. Dexter initially refuses but after Mr. Archer points out how jealous Corliss will be if she sees Dexter with another girl, he eventually caves.

Dexter is too nervous to talk on the phone, so Mr. Archer has to call Lucy Peters to set up the date. Lucy agrees to go with Dexter but only because she wants to see the picture. She has a long list of rules, including no hand holding and no smooching.

At the drive-in, Dexter does his best to make Corliss jealous. At first, Lucy keeps pushing away when he tries to sit next to her. By the time Lucy lets Dexter put his arm around her, Finly and Corliss are gone.

The next day, Mr. Archer stops Dexter from marching inside the house and fighting Finly, then gives Dexter boxing advice. Poor Mr. Archer isn’t as physically fit as he’d like to think and ends up hurting himself over and over again. When Dexter finally confronts Finly, the fight is over before it starts. Finly never lays a finger on Dexter, whose own punch sends him into the bushes.

Out of ideas, Dexter decides to try “that good ole reliable caveman stuff” on Corliss. He whistles and calls for her. Mr. Archer doesn’t think it will work but when Corliss comes outside, Dexter tells her she’s his girl, to stay away from Finly, and demands she get her coat so they can go to the drive-in again.

There’s a minor subplot in which Mrs. Archer asks her husband for fashion advice. She has a new bag that doesn’t match any of her clothes. He inadvertently tells her to go shopping for a new pair of shoes and a hat, then accidentally suggests she buy a new dress. At the end of the episode, after seeing Dexter laying down the law with Corliss, Mr. Archer tries the same thing with Mrs. Archer, insisting she return the bag and get one that matches her clothes.

As I mentioned in last month’s Retro Review column, I don’t watch a lot of 1950s sitcoms. I just don’t find them funny. While watching “Corliss the Cheerleader,” I didn’t laugh once. The most amusing parts of the episode were the brief comments from the unseen narrator.

Don’t get me wrong. There’s nothing bad about this episode. It’s not awful. I didn’t hate watching it. The not-so-vague sexism at the end aside, it’s harmless. Perhaps quaint is the best way to describe it. The gender roles are as old-fashioned as much of the dialogue.

I do wonder if this episode may not be the best representation of Meet Corliss Archer, however. Dexter is the focus, not Corliss. Her role in the episode is very limited, which is too bad because Ann Baker seems to have a lot of fun playing the free-spirited teenager.

An uncredited narrator offers amusing commentary between several scenes while cartoon drawings are shown on screen. The Internet Movie Database credits Hy Averback as the narrator.

According to a handful of online sources, this episode aired in syndication in June 1954.

Bobby Ellis, who stars as Dexter Franklin, previously played the role in the live CBS Meet Corliss Archer sitcom in 1951 and 1952.

Alpha Video released “Corliss the Cheerleader” on DVD in 2004. The episode is also available on YouTube and the Internet Archive.

Did you watch Meet Corliss Archer in syndication back in 1954? Do you own episodes on DVD? Hit the comments with your thoughts.