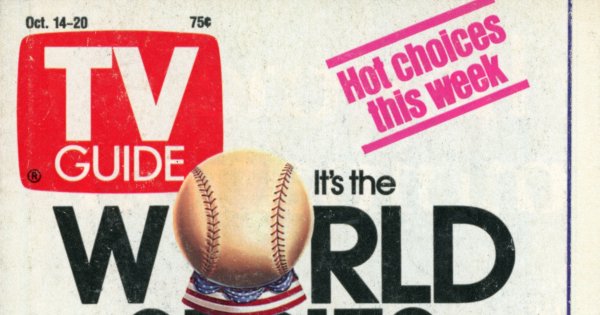 On the Cover (Clockwise from top): Art, by Kenneth McMillan; Faye Dunaway by Elizabeth Hoffman; Chynna Phillips and Perry King, by Paul Drinkwater

I didn’t read this week’s cover article about the World Series because I’m not a sports fan. I skimmed the four-page profile of Chynna Phillips, daughter of Michelle and John Phillips of The Mamas and the Papas, who today is better known as a singer than an actress.

The one-page article about NBC made-for-TV movie An Eight Is Enough Wedding can hardly be called an article. It consists of a large picture of the cast with a lengthy caption, and a brief paragraph with short quotes from Dick Van Patten and Adam Rich. The profile of Faye Dunaway, on the other hand, is roughly five pages long. Why did she agree to take a supporting role in a made-for-TV movie (Cold Sassy Tree on TNT)? Because she’s executive producing the project. After spending so many years working for others, she’s working for herself.

In addition to the cover article, I also skipped the one-page The Scoop profile of Pat Corley and the excerpt from Louie Anderson’s new book.

Prices from the Video Cassette Report for movies on VHS: Who Framed Roger Rabbit ($22.99). There’s also a list of new movies coming to HBO/Cinemax and Showtime/TMC. Cheers ‘n’ Jeers criticizes As the World Turns for a “ludicrous” episode in which a character shoots and kills his own father, praises DinoRiders for a premise that’s “almost too cool for after school”, laments Andrew “Dice” Clay’s raunchy performance on the 1989 MTV Video Music Awards, and applauds NBC for more than 40 years of “superb” baseball coverage.

Robert MacKenzie doesn’t have many positive things to say in his review of ABC’s PrimeTime Live. “There is more wrong here than the vicissitudes and pitfalls of live TV,” he declares. “Sam [Donaldson] and Diane [Sawyer] are trying to function as hosts, reporters, commentators, anchors, moderators and regular folks. These are two very talented people, but that’s too many incompatible roles.” He concludes the review with some suggestions, which include dropping the studio audience and cutting back on the commentary.

There are five news reports this week. The first examines plans by the broadcast networks (ABC, CBS, and NBC) plus CNN to share election-night polling data. The second report breaks down the winners and losers of the 1989-1990 season so far. Doogie Howser, M.D. (ABC) and Major Dad (CBS) are considered hits. Life Goes On (ABC), Booker (FOX), and Alien Nation (FOX) are “holding their own.” The Famous Teddy Z (CBS) hasn’t done as well as critics expected. Top of the Hill (CBS), Peaceable Kingdom (CBS), and Homeroom (ABC) are among the new shows expected to face early cancellations.

Other reports: fans of Beauty and the Beast are outraged over reports Linda Hamilton’s character may be tortured and murdered; Jackie Mason’s controversial remarks at a benefit luncheon haven’t impacted ABC’s Chicken Soup; Midnight Caller collaborated with AIDS activists on an episode that continues a story from a controversial episode last season.

Two of the four letters respond to an article about the Emmy Awards published in the September 16th issue. Here they are:

The voting body for the Emmys has got to be the laziest group of people on the face of the Earth [“TV Guide Plus–TV Industry Insiders Speak Out: Who Really Deserves the Emmys?” Sept. 16]. Year after year Night Court’s John Larroquette won the award for Best Supporting Actor in a Comedy, until finally (out of embarrassment, evidently) he bowed out of the competition. Now that Candice Bergen has won tan Emmy for Best Actress in a Comedy, instead of any of the “Golden Girls,” she only has to keep showing up for work to claim the prize for years to come.
D.L. M.
Holly Hill, Fla.

It was almost laughable that the top miniseries award went to ABC’s War and Remembrance rather than CBS’s Lonesome Dove. Let’s see which one gets the first rerun.
Rob T.
Big Sandy, Texas

9:30PM CBS (7) (9) (10) FAMOUS TEDDY Z (CC)–Comedy
Pet and plant sitting for an out-of-town movie star should be a simple enough task for Teddy (Jon Cryer), with help from his entire family, along for a look at the star’s Malibu beach house.

Wednesday, October 18th, 1989
8PM CBS (7) (9) (10) PEACEABLE KINGDOM (CC)–Drama; 60 min.
While Rebecca (Lindsay Wagner) debates packing her trunks for a job back in New York, the end of an era is trumpeted at the zoo as Jed (Tom Wopat) tries unorthodox methods to save an elderly elephant on her last legs.

Friday, October 20th, 1989
8PM CBS (7) (9) (10) SNOOPS (CC)–Mystery; 60 min.
A convention reunites Chance (Tim Reid) with fellow activists from his college days, one of whom apparently commits suicide shortly after an intimate gathering at the Dennis’s home.

9PM NBC (4) (5) (22) HARDBALL (CC)–Crime Drama; 60 min.
Smoke signals lead Charlie and Kaz (John Ashton, Richard Tyson) to a Native American searching for his great-grandson, who spent time in an institution other than the university he’d written of.
[Postponed from an earlier date.]

Once again, there was little of interest within the pages of TV Guide. Hopefully as the season progresses, there will be more written about which shows are hits and which are flops. On television, viewers had the World Series on ABC and several made-for-TV movies to watch but not new episodes of shows like Homeroom or Top of the Hill.

That’s it for this issue. Check back next week for my review of the October 21st, 1989 issue of TV Guide. As always, hit the comments with any thoughts or reactions.