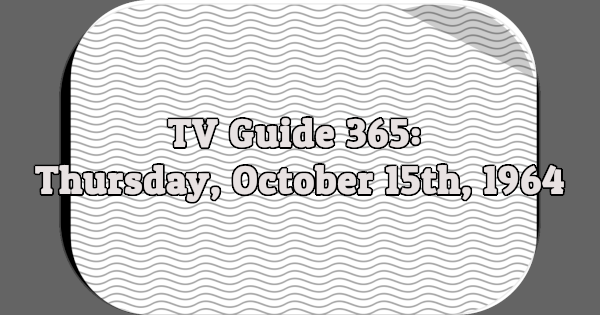 7:30 MUNSTERS–Comedy (CBS)
Herman mistakenly believes that the “little visitor” Lily’s telling Marilyn about means a visit from the stork.

DANIEL BOONE–Adventure (NBC)
“The Family Fluellen.” Daniel and Yadkin’s search for poachers unearths unexpected culprits: A widowed Welshwoman and her three children, who are determined to settle in the midst of hostile Shawnee territory. (60 min.)

8:00 PERRY MASON–Drama (CBS)
“The Case of the Sleepy Slayer.” Ailing Abner Gordon informs his niece Rachel that she’ll be disinherited and face legal action if she doesn’t replace the money she’s “diverted” from his funds. (60 min.)

DONNA REED (ABC)
“The Daughter Complex.” The Stone family is treated to personal, but disturbing, emotional analyses when Mary returns from college with a psychology award.

8:30 DR. KILDARE–Drama (NBC)
“The Last Leaves on the Tree,” a comedy-drama by Robert Presnell Jr. Bumbling Oliver Blair, grandson of Blair’s founder, asks Gillespie and Kildare to certify that the other members of his family are downright incompetent. (60 min.)

MY THREE SONS–Comedy (ABC)
Conclusion of a two-part story filmed on location in Ireland. While the village of Farnsea gives an official welcome to its returning son Bub, colleen Mary Kathleen plans a very personal one for Steve.

BEWITCHED (ABC)
Samantha offers to help Darrin with an all-important new approach to the Caldwell Soup account, but Darrin turns her down. He’s certain that her assistance would mean witchcraft.

9:30 HAZEL (NBC)
[COLOR] “The Flagpole.” The Baxters are given an American flag, and Hazel decides that nothing less than a 30-foot flagpole is worthy of flying it.

PEYTON PLACE (ABC)
Rodney attends the Founder’s Day Festival with Allison, and Betty corners him for a serious talk.

10:00 DEFENDERS–Drama (CBS)
“Go-Between,” by Larry Cohen. The son of Presidential candidate is kidnapped, and the worried father confides in Preston rather than the police. (60 min.)

SUMMER OLYMPICS–Tokyo (NBC)
[SPECIAL] Scheduled: finals in the women’s long jump and men’s 100-meter dash; eight-oar rowing finals and summary; and finals in the men’s springboard diving and women’s 100-meter backstroke. This week’s schedule of events is listed on page A-4. (60 min.)

11:15 SUMMER OLYMPICS–Tokyo (NBC)
[SPECIAL] Scheduled: men’s discus finals; and finals in the men’s 400-meter freestyle and men’s 200-meter breast stroke. This week’s schedule of events is listed in the Olympic Guide on page A-4.