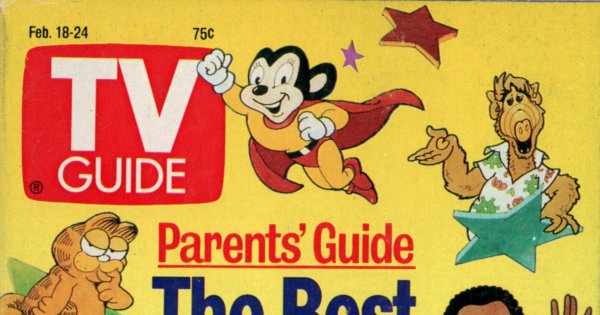 James Morrow spent two months researching his two-part article about the best children’s shows on television. This issue’s installment tackles children’s TV shows on network television and PBS. Saturday morning TV on the networks surprised Morrow. “It would appear that, upon finding their audience radically eroded by new technologies,” he writes, “the kidvid moguls have in desperation tried an unprecedented tactic: imagination.”

Morrow praises The New Adventures of Winnie the Pooh (ABC), Kissyfur (NBC), and Disney’s Adventures of the Gummi Bears (NBC) for “theatrical-grade animation, sprightly stories, conscientious eschewing of laugh tracks and, best of all, the willingness to let the visual jokes speak for themselves.” He also has positive things to say about shows like Alf (NBC), Mighty Mouse: The New Adventures (CBS), Pee Wee’s Playhouse (CBS), and Hey Vern, It’s Ernest! (CBS).

There’s still “twaddle” on Saturday mornings, Morrow laments, naming A Pup Named Scooby Doo (ABC), The Chipmunks (NBC), and Jim Henson’s Muppet Babies (CBS). Not to mention all the commercials. The “high point” of the rest of the week is The Magical World of Disney on NBC. ABC and CBS have afternoon specials, as well.

Morrow spends more than an entire page running through the list of kid-friendly PBS programs. There are dramas like WonderWorks and Degrassi Junior High; “education-as-entertainment” shows like Sesame Street, Mister Rogers’ Neighborhood, Reading Rainbow, 3-2-1- Contact, and Shining Time Station; and new programs like Square One TV and CE News Magazine.

The profile of John Goodman is interesting because it describes how drastically his life has changed with the huge success of Roseanne on ABC. He can’t go anywhere without people recognizing him. Yet he’s constantly worrying about his career and the right way to handle his newfound fame.

Prices from the Video Cassette Report for movies on VHS: The Deceivers ($89.95), J. Edgar Hoover ($79.98), Redneck Zombies ($79.95). Cheers ‘n’ Jeers praises the McDonald’s ad campaign reuniting characters from classic TV shows like Gilligan’s Island and The Beverly Hillbillies, criticizes the networks for too many repeats and pre-emptions early in the strike-delayed season, laments too much merchandising on PBS stations, and applauds third place CBS for turning to quality to improve its fortunes.

Merrill Panitt watched five episodes of China Beach for his review, two more than the minimum required for review purposes. Why? The show intrigued him so much he watched the extra episodes out of “sheer admiration.” He praises casting director John Levey for “fusing his brilliant ensemble cast with actors who play sharply drawn roles in only one or a few episodes.”

“This is not a show for the squeamish,” Pannitt states. “The operating-room and morgue scenes are done as realistically as possible, and they’re sometimes gruesome. Apparently he producers deliberately try to shock viewers into realizing what war is. They succeed.” China Beach is “a remarkable series,” he concludes, “one that has already gained a respectable audience and deserves an even larger one.”

There are three In the News reports this week. 1) Producers are upset with ABC censors, including thirtysomething co-executive producer Marshall Herskovitz, who has simply stopped talking to ABC’s standards and practices department. Alfred R. Schneider, ABC vice-president of policy and standards, defends the network’s position. 2) TV Guide regrets any confusion stemming from a misspelled name in an October 22nd, 1988 article. 3) CBS will spend a week examining Japan in-depth to help viewers understand what the death of Emperor Hirohito means for the country and the world.

On the Grapevine contains three reports this week, one of which is about ABC’s China Beach. The show plans to to incorporate interviews with Vietnam veterans in an upcoming episode.

According to The Ratings Race, the first two installments of the Lonesome Dove miniseries scored high ratings for CBS, potentially reviving both the network miniseries and Westerns on network TV. In fact, the miniseries may become one of the ten highest-rated miniseries of all time. Also, ABC’s January 31st Barbara Walters special earned a 24.3/37 Nielesn rating/share, making it her highest-rated special in four years. And FOX earned its best ratings ever on February 5th with America’s Most Wanted (11.6/17 rating/share) and Married… with Children (10.9/15 rating/share).

You gave Jane Fonda “The Damage-Was-Already-Done Award” for going on 20/.2 to apologize for her 1972 trip to Hanoi. I would suggest that the only absurdity in Fonda’s apology was that she felt it was necessary at all.”
Jeffrey M. M.
Throop, PA.

Two other letters respond to the January 14th article about the President and the media by Richard M. Nixon . Here’s one:

With all due respect to our former President, isn’t asking Richard Nixon to give George Bush advice on press relations a lot like consulting Mike Tyson about marital relations?
Gary B.
Hermosa Beach, Cal.

ABC (24) (2) (6) (7D) (21) MURPHY’S LAW (CC)–Crime Drama; 60 min.
The loft gets a bit crowded as Murphy (George Segal) plays unwilling host to his aunt, a murder-mystery writer fascinated by the macabre; an imperious co-worker dispossessed of everything; and Wes (Josh Mostel), who’s a suspect in a murder. Kimi: Maggie Han.
[Time approximate on Ch. 6.]

Compared to the previous week, there are very few Close Ups in this issue. I wonder why. The articles are mostly the usual mix of profiles and promotion for upcoming programming, with one or two exceptions. The lengthy look at children’s programming is probably the best article. I must’ve watched a lot of public television as a kid because I recognize nearly all of the PBS shows. One show I hadn’t heard prior to reading about it in this issue is Timeline, also on PBS. It sounds truly bizarre.

That’s it for this issue. Check back next week for my review of the February 25th, 1989 issue of TV Guide. As always, hit the comments with any thoughts or reactions.