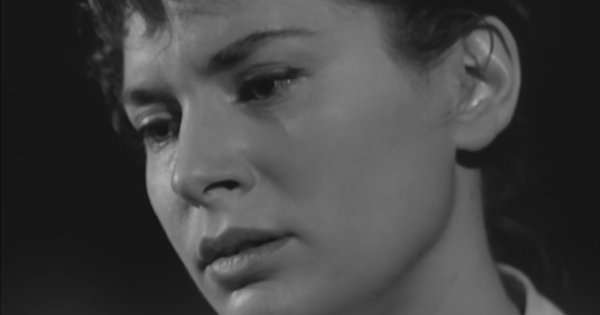 Retro Review examines episodes of short-lived, forgotten, or obscure television shows. Each column includes both a short summary and a review.

This one season wonder aired in first-run syndication during the 1957-1958 season. Beverly Garland stars as Patricia “Casey” Jones, a New York City policewoman often assigned to cases requiring her to go undercover. Episodes feature voiceover narration from Jones. Many end with her addressing the camera to share her final thoughts.

Casey goes undercover at the minimum security wing at Hudson Penitentiary for Women. Her goal? Learn who killed an inmate named Helen. Three other inmates had access to Helen’s room and all three hated her. The murderer used a table spoon sharpened to a point. Casey, using the alias Billy Jarrett, is completely on her own. Only the warden knows she’s a policewoman.

She soon meets the three suspects. Paula Shane killed someone while driving drunk. Lois Gray is a shoplifter, possibly a kleptomaniac. Taffy Connell, the leader of the three, is finishing a six-year stint for armed robbery. Casey focuses on Taffy as the prime suspect. When Taffy tries to order her around, she pushes back.

Taffy, Paula, and Lois confront Casey in her room. She tells them the warden offered her a full pardon if she finds out who killed Helen. They accuse one another of being the killer, then burst into laughter. Casey is left unsettled. Late that night, Lois sneaks into Casey’s room. She holds a knife to Casey’s throat, a knife fashioned out of a spoon. Lois killed Helen and she’s going to kill Casey, too, afraid Casey will find out the truth.

Casey is able to disarm Lois and tells the matron who she is.

I watched Decoy for the first time last year on Amazon Prime. I’d heard of the show and even owned four episodes on a public domain DVD but hadn’t gotten around to watching them. Having only read a little bit about the show, I didn’t know what to expect. I was pleasantly surprised at how much I enjoyed it. Although the episodes quickly became formulaic, they weren’t repetitive.

“Deadly Corridor” sticks out because of guest star Lois Nettleton. She’s one of my favorite actresses. It’s one of two episodes of Decoy she appears in. (The other is “Ladies Man,” in which she also plays a character named Lois.) It’s a solid episode. If the storyline is a little weak, the fine performances by Beverly Garland and Lois Nettleton more than make up for it.

Casey doesn’t solve the case in “Deadly Corridor” by following clues and talking to suspects. What she does is psychological. She claims to know who killed Helen in the hopes it will rattle the killer. It does. But it rattles Casey, too.

“For the first time in my life I was a decoy without a gun or cover,” she muses. “Surrounded by guards, I was more alone than I had ever been. Alone and very tired.”

Fortunately, Lois isn’t a good killer. She had a child, a baby who died while she was behind bars, and the loss broke something inside her. Why did she kill Helen? Because Helen was the reason she was still in jail when her baby died. Helen used to give her things and then turn around and tell the warden Lois had stolen them. When Lois had her sentence extended, Helen laughed.

After the revelation that Lois is the killer, the actual ending is anticlimactic. Casey disarms Lois, calls the matron, and reveals she’s a policewoman. The matron leaves to call the warden and Lois does nothing. She knows she’s staying in prison for a long, long time.

Film Chest Media Group released all 39 episodes of Decoy on DVD in May 2017. The series is also streaming on Amazon Prime.

Do you remember watching Decoy on TV back in the 1950s or 1960s? Have you watched it recently on Amazon Prime or on DVD? Hit the comments with your thoughts about the show or this episode.