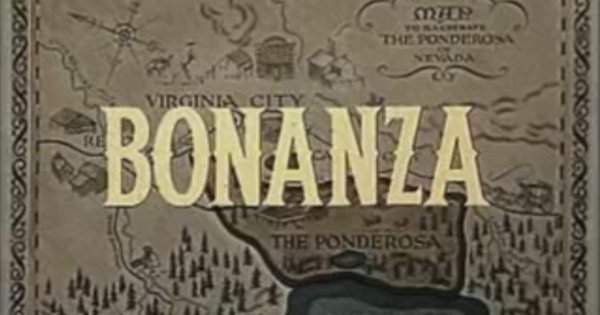 Cartwright Is The Name

I’m trying something different this month. Rather than ask readers to share their memories of technology relating to television, today’s column is about a specific TV show: NBC’s long-running Bonanza. Why Bonanza, you ask? It’s not obscure or forgotten and certainly not short-lived. The western ran for 431 episodes over the course of 14 seasons between 1959 and 1973. And from the very beginning, NBC broadcast Bonanza in living color.

The show’s longevity and popularity is why I chose Bonanza. If you’re a regular visitor to Television Obscurities, chances are you’ve seen at least a few episodes of Bonanza.

In keeping with the goal of Share Your Memories, I’m most interested in hearing from people who watched Bonanza during its 1959-1973 network run on NBC. But if you started watching it in off-network syndication (perhaps during the brief period when it aired under the name Ponderosa) or on cable, you’re more than welcome to contribute as well.

If you’re old enough to remember when Bonanza debuted in September 1959, what do you remember? It was one of two dozen westerns on television that fall. Did it stand out? It ranked outside the Top 30 during the 1959-1960 season, so it clearly wasn’t an immediate hit with viewers. NBC stuck with Bonanza and it soon became one of the most popular shows on TV.

Were you forced to watch in black and white because your family didn’t own a color TV set? One of just a handful of regular weekly TV shows airing in color, only a small percentage of viewers were able to see Bonanza in color, at least until the color explosion of the mid-1960s.

When Pernell Roberts left after the 1964-1965 season, were you upset? Do you recall reading about his departure in magazines or newspapers? Did you or anyone you know stop watching, unhappy that Adam was gone? Did you hate the new theme song used from 1970 to 1972? Do you remember learning Dan Blocker had died in May 1972? When Bonanza returned that fall, without Hoss, were you surprised? Were you devastated by NBC’s decision to abruptly cancel the series partway through the 1972-1973 season?

What about Bonanza merchandise? There were comic books, novels, action figures, and much more. Did you beg your parents to buy you a Bonanza lunch box? Do you still have it?

Bonanza is not an obscure TV show. Far from it. Remember, I’m not asking to hear about your favorite character or favorite episodes. I’m curious to learn about your experience watching Bonanza, particularly if you watched during its original NBC run, and especially if you recall details about the network’s promotional efforts (TV, radio, print) from that period.

As for me, I watched a lot of Bonanza on TV Land back around 2005 or 2006. I think I’ve seen most episodes from the first five or six seasons and a smattering of later episodes, including the two-parter that kicked off the show’s 14th and final season. I vaguely remember seeing promotional spots for Ponderosa, the prequel that aired on PAX during the 2001-2002 season, but I didn’t watch it.