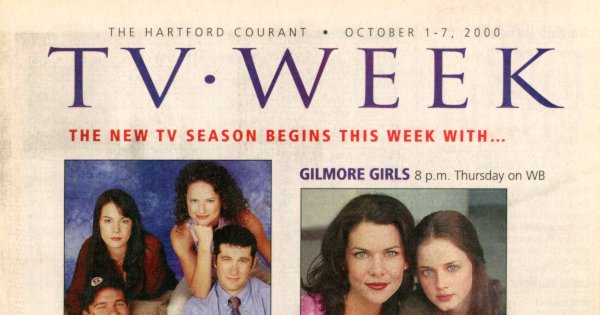 Do you remember weekly TV inserts published by newspapers with titles like TV Week, TV Times, TV Channels, TV Scene, or TV Prevue? These publications usually included a week’s worth of local TV listings plus articles, news, photographs, and advertisements. Some newspapers still publish weekly TV inserts, believe it or not. Others have switched to the national TV Weekly magazine published by NTVB Media.

My family never subscribed to TV Guide when I was growing up. I can remember flipping through the Hartford Courant’s weekly TV Week insert, however. There were no articles to read, just daily grids, black-and-white ads for TV shows, and pages of movies. For some reason, I held on to nearly every issue of TV Week from the 2000-2001 season plus dozens of issues from 2004 and 2005.

I think The Hartford Courant stopped publishing TV Week in 2012, replacing it with NTVB’s TV Weekly.

I’ve never understood how newspaper TV inserts competed with TV Guide Magazine but clearly they did.

Old issues of newspaper TV inserts don’t seem to be very valuable. You can find dozens, if not hundreds, listed on eBay at any given time. Collectors may want to own a copy of a local TV insert if a specific TV show is on the cover. Over the years, I’ve referenced a handful of articles published in various local newspaper TV inserts here at Television Obscurities.

Do you remember reading your local newspaper’s weekly TV insert? What was it called? Did you keep any issues? Do you subscribe to NTVB’s TV Weekly? Hit the comments with your recollections and memories.

8 Replies to “Share Your Memories of Local Newspaper TV Inserts”