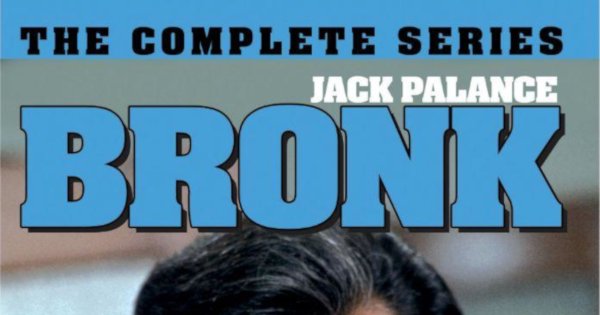 Warner Archive will release one season wonder Bronk (CBS, 1975-1976) on DVD on June 4th. Jack Palance stars as a police lieutenant charged with rooting out corruption.

Carroll O’Connor co-created Bronk with Ed Waters. O’Connor served as an executive producer on the pilot telefilm, which aired on CBS in April 1975. The weekly series ran for 24 episodes between September 1975 and March 1976.

Star Jack Palance plays against type as soft-spoken, taciturn and thoughtful police lieutenant Alex Bronkov in this hard-edged post-Serpico crime drama created by Carroll O’Connor (In the Heat of the Night) and Ed Waters (The FBI). Called back into service following the murder of his old partner, Bronk is an acting lieutenant with a special commission from Ocean City mayor Pete Santori (Joseph Mascolo). Corruption runs rampant in Ocean City, blurring the line between cop and criminal, leaving Bronk and his allies – partner Sgt. John Webber (Tony King) and retired desk sergeant Harry Mark (Henry Beckman) – firmly on the outside in their crusade for justice. Undeterred, Bronk and his team take on the bad guys wherever they hide – whether it be in a rundown warehouse or a mansion on a hill. Notable guest stars include Mark Hamill, Sally Kirkland, Edward James Olmos, Vic Morrow, Michael Parks and Cameron Mitchell.

Please note this is a manufacture-on-demand title (Warner Archive uses the term “Made To Order”).

You can’t pre-order the show on Amazon yet but it is available for pre-order at the WB Shop website.

One Reply to “Bronk Coming to DVD June 4th”