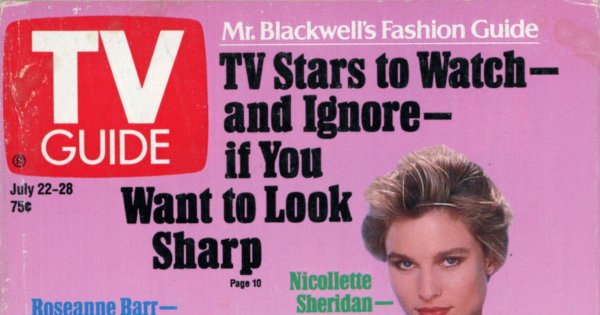 On the Cover: Roseanne Barr, by Roger Prigent; and Nicollette Sheridan, by Bernard Boudreau

I skimmed the article about TV news, in which the authors argue television “is good at covering news events–indeed, better than ever. But what it fails to do well, according to the critics, is put those events in context.” Some of the major issues television doesn’t cover adequately include race, class, foreign news, economics, and labor.

The one-page article about Adam West is depressing, depicting the actor as bitter and angry about all things Batman, including the new Michael Keaton movie and the money he feels he’s owed by the producers of his 1960s Batman TV show. The “article” about Laurie Metcalfe is just a half-page box filled with a few facts about the actress. The articles about Joanne Kerns, Kadeem Hardison, and Olivia d’Abo are typical TV Guide profiles.

Prices from the Video Cassette Report for movies on VHS: The Cocoanuts ($19.95), Daffy Duck’s Quackbusters ($19.98), The Glass Key ($29.95), I Cover the Waterfront ($14.95). Cheers ‘n’ Jeers praises the dogs on Empty Nest and Married with Children, criticizes CBS for firing members of the Guiding Light cast, laments TV personalities like Bob Vila and Doug Llewelyn who “exploit their on-air personae in commercials,” and applauds NBC baseball announcer Tony Kubek.

[TV Guide Plus includes news reports and following categories: On the Grapevine, The Ratings Race, and Soap Opera Guide.]

There are two news reports in this issue. The first is a lengthy look at reaction to ABC’s new drama Life Goes On. The second reveals The Rolling Stones are considering a pay-per-view concert on Showtime.

On the Grapevine contains five reports. Fred Savage and Josh Saviano want to direct co-direct an episode of The Wonder Years. 21 Jump Street will shift focus from high school to college due to the cast getting older.

According to The Ratings Race, new episodes of Hooperman and The Robert Guillaume Show on ABC aren’t doing well against reruns on the other networks.

Two of the six letters respond to an article about TV as a babysitter published in the July 1st issue. Here they are:

Is TV a trustworthy baby sitter? Of course not [“Can You Trust TV as a Baby Sitter for Your Kids?” July 1]! It’s not a baby sitter at all; it’s entertainment. It cannot take responsibility for the safety and well-being of a child. It’s no good at all in a crisis. And it can’t provide emotional support or moral guidance. As long as children watch TV, they are going to learn from it. It’s up to us, their parents–not legislators, not network executives–to see to it that whatever they learn is consistent with our values, and not frightening or confusing. If we’re too tired or too busy for this kind of supervision, what a great excuse to turn the set off!
Joanna L. F.
Princeton, N.J.

Don’t judge parents of young children too harshly. Monitoring the TV is a difficult job nowadays. While watching the 5 o’clock news with my young son one night the lead story was about a man describing how he contracted AIDS from a prostitute. The station’s medical reporter then gave an in-depth report on how to have safe sex…

Saturday, July 22nd, 1989
10PM CBS (11) (2D) (7) (10) (15) WEST 57TH (CC)–Newsmagazine; 60 min.
Scheduled: A May conversation with Prince Charles, who discusses his concerns about the environment and limitations imposed on his life by his title; an April visit to the Montreal International Comedy Festival; and a segment on life in Key West, Fla. (Repeat)

Sunday, July 23rd, 1989
7PM NBC (13) (35) (4) (4D) (22) (33) JIM HENSON (CC); 60 min.
Solid Foam introduces its video “The Music Keeps Rollin’ Along,” and Buster Poindexter proves it by singing “All Night Party.” Fozzie Bear learns how to get ahead in a skit with a ghost and two basketball players, and John Hurt narrates a fable about an orphaned servant whose destiny is to become “The True Bride.”

8PM ABC (24) (2) (6) (7D) (21) HAVE FAITH (CC)
The priests collar a troubled choirboy (Blake Soper) who’s dipping into the collection box, while a nervous Father Gabe (Stephen Furst) tries not to faint during confession. (Repeat)
[Last show of the series.]

Tuesday, July 25th, 1989
9:30PM CBS (11) (2D) (7) (15) SUMMER PLAYHOUSE (CC)–Drama
An ace New York columnist (James Farentino) and a mayoral aide (Lindsay Crouse) marry and create an atypical “American Nuclear” family with his pair of rebellious kids and her upright son and daughter. Based loosely on the life of columnist Jimmy Breslin, who has a cameo as Marty the news vendor.

The summer doldrums continue for both TV Guide, with articles about television fashion and midlife crises, and the networks. I wonder how many viewers watched this week’s installment of Summer Playhouse on CBS or unsold sitcom pilot “Somerset Gardens” on ABC? For the record, despite TV Guide labeling this week’s episode of Doctor, Doctor “the last episode of the series,” the sitcom returned to CBS in November 1989 for a second season.

That’s it for this issue. Check back next week for my review of the July 29th, 1989 issue of TV Guide. As always, hit the comments with any thoughts or reactions.