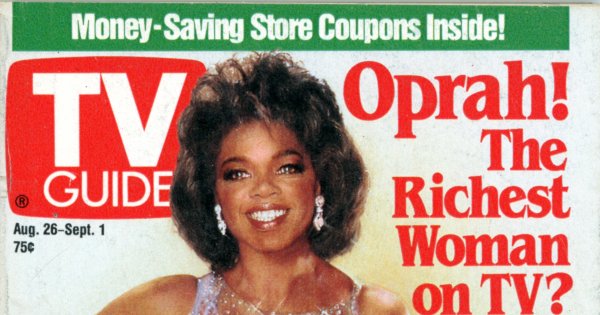 On the Cover: Oprah Winfrey, art by Chris Notarile

I never watched The Oprah Winfrey Show but of course I know who Oprah is and a little about her career. I did not know she was a limited partner in a Chicago restaurant called The Eccentric. According to the article, “she generally spends one or two nights a week greeting people and dashing from table to table.” A sidebar runs though other wealthy women in television, including Marcy Carsey, Mary Tyler Moore, Susan Harris, and Joan Rivers.

I skimmed the article about the dangers facing stuntmen, which references several incidents during filming that resulted in serious injuries or deaths, plus statistics from the California Occupational Safety and Health Administration as well as the Screen Actors Guild.

“In reality,” Andy Meisler writes in his article about actresses who undressed for Playboy, “appearing in the nude has as much effect as getting a new set of publicity photos. It’s a maneuver that is based on a miscalculation and desperation and a large amount of pure, unadulterated naivete.” Only a few actresses were willing to comment for the article, including Judy Norton-Taylor, Audrey Landers, and Jenilee Harrison. All three agreed posing for Playboy had no impact on their career.

The article about Grant Shaud is a half-page “The Scoop” box. I skipped the profiles of Robert Stack and Dodgers manager Tom Lasorda.

There are four news reports in this week. The first is a lengthy overview of how characters on L.A. Law, Head of the Class, Designing Women, and The Cosby Show will look different this fall. Other articles discuss Ed O’Neill and Katey Sagal looking for big raises, Richard Threlkeld’s departure from ABC News, and mud wrestling on pay-per-view.

Three of the eight letters respond to an article about tabloid television published in the August 5th issue. Here are two:

The American people are weary of having their lives trashed and trespassed upon by the G.O.D.S. (Geraldo, Oprah, Donahue and Sally), who try to prove that exploding cars, blazing guns, yelling people and obligatory sex at every turn of the road are somehow relevant to the American way of life. Freedom of speech does not include freedom to desecrate life. Maybe someday they will get the word, and modify their programming accordingly.
Peter W. E.
Amarillo, Texas

I say hurrah for so-called “tabloid TV.” It is the only area of television that even recognizes the existence of gays and lesbians. Granted, they are treated as curiosities on these shows, but at least they get visibility–and the chance to prove that they are no different than others in their dreams and aspirations.
Marianne G.C. S.
Stamford, Conn.

Sunday, August 27th, 1989
9:30PM FOX (36) (28) (50D) OPEN HOUSE–Comedy
Debut: This spinoff from “Duet” focuses on the real-estate office where Linda Phillips (Alison LaPlaca) is carving out a new career while, in the opener, attempting to outshine a co-worker (Philip Charles MacKenzie), as both curry favor with the boss (Jon Cypher), who’s soon to announce a promotion.
[Postponed from an earlier date.]

Friday, September 1st, 1989
8PM NBC (13) (4) (4D) (22) (33) HOUND TOWN–Cartoon
In an animated tale of suburban canines, shy mutt Rusty is conned into throwing a party while his family is away, thanks to scheming Great Dane Napoleon, who has a self-serving plan for Rusty to meet a classy show dog named Sasha. A pilot not on NBC’s announced fall schedule.

8:30PM NBC (13) (4) (4D) (22) (33) ONLY TEMPORARY
Temporary-agency employee Barbara (Chelsea Field) finds her job may be just that when her fellow workers and roommates–her ditsy sister and equally ditsy friend (Lisa Kudrow, Christie Mellor)–continually mess up. A pilot not on NBC’s announced fall schedule.

This issue wasn’t quite as dull as last week’s issue, but it came close. Hopefully things will pick up in September as the new TV seasons approaches. On television, viewers could sample the premiere of new FOX sitcom Open House, new episodes of 13 East and FM, and a pair of unsold sitcom pilots.

That’s it for this issue. Check back next week for my review of the September 2nd, 1989 issue of TV Guide. As always, hit the comments with any thoughts or reactions.