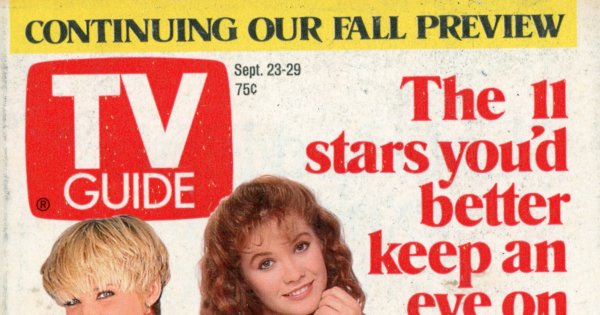 This issue continues TV Guide‘s fall preview with an 11-page look at TV stars who “are among the people whose styles on and off screen promise to hold special interest for us in the new season.” They are:

I skipped the book excerpt from Final Warning, an upcoming book by Robert Kupperman and Jeff Kamen and the one-page “The Scoop” profile of Michael Damian.

Robert MacKenzie reviews FOX’s Totally Hidden Video. “I chuckle along with this half-hour descendant of Candid Camera like any other voyeuristic booby,” he writes, “but sometimes I wonder if I shouldn’t be scared instead.” The gags are funny, he continues, but it’s unnerving to see what people are willing to do. “I had to admire the adventurous spirit, if not the wisdom, of the young woman who agreed to a new beauty treatment involving hanging her from a rafter by her hair.” MacKenzie notes that Candid Camera‘s Allen Funt is not a fan of Totally Hidden Video.

There are six news reports this week, one of which is a long look back at the first 14 seasons of Saturday Night Live. Other reports: a focus group reacted negatively to a synopsis of the mid-season premiere of Beauty and the Beast; Chicken Soup star Jackie Mason and executive producer Saul Turteltaub met with members of the Jewish Defense League following the taping of an episode; Catherine Crier, a state district court judge with no television experience, has joined CNN as a new anchor; Chantal Contouri wrote an open letter criticizing her General Hospital co-star Tristan Rogers; and Monday will be the “hottest night” of the new season with tough competition on the Big Three networks and FOX looking to draw younger viewers to its new lineup.

Three of the seven letters respond to an article about Oprah Winfrey published in the August 26th, 1989 issue. Here are two:

I agree that Oprah is the richest woman on TV. I’m not referring only to her financial status but to her status as a human being as well. She really cares [about people], and I know this caring would be there even if the money weren’t. She is an inspiration to me.
Gina M.
Linden, Pa.

Oprah may be “the richest woman on TV,” but does she have time to enjoy her wealth? It sounds like she works a 24-hour day trying to keep her hands on her money. In any case, I have great respect for her. She still takes time for her friends–something rare in today’s world.
J. Elizabeth C.
Edmonds, Wash.

FOX (36) (28) (50D) BOOKER–Crime Drama; 60 min.
Debut: Booker (Richard Grieco) exits Jump Street to become head insurance investigator for Teshima Corp. But, in the opener, he detours to help his new assistant, Elaine (Katie Rich), clear a man she feels she wrongly convicted when she was a juror.

ABC (24) (2) (6) (7D) (21) FREE SPIRIT (CC)–Comedy
A warlock (Dann Florek) arrives to retrieve Winnie, who is only on temporary duty with the Harpers, and he tests her love for the family by denying her the use of her powers.

9PM CBS (11) (2D) (7) (10) (15) ISLAND SON (CC)–Drama; 60 min.
Daniel’s estranged son Sam (William McNamara) is in Hawaii for a karate match, but still has reservations about seeing his father. Meanwhile, someone seems to be using an apparently alcoholic diabetic as a punching bag.
[Another episode airs Tuesday.]

9:30PM FOX (36) (28) (50D) OPEN HOUSE–Comedy
Fighting with Richard (Chris Lemmon), Linda (Alison LaPlaca) throws herself into her work, prompting Ted (Philip Charles MacKenzie) to plot to throw them together and throw Linda off her hot sales track.
[Postponed from an earlier date.]

9PM FOX (36) (28) (50D) ALIEN NATION (CC)–Drama; 60 min.
After taking a bullet in the arm to save George (Eric Pierpoint), a Newcomer patrolman dies during minor surgery performed by the director of a Newcomer clinc, who’s done quite well since his high-school days with Sikes (Gary Graham).

10PM CBS (11) (2D) (7) (10) (15) ISLAND SON (CC)–Drama ; 60 min.
A resident’s mother, herself a renowned surgeon, pressures him to specialize in surgery even though he feels he can’t cut it. Meanwhile, Sam (William McNamara) is entranced by a lovely visitor who turns out to be a patient.

10PM NBC (13) (35) (4) (4D) (22) (33) HARDBALL (CC)–Crime Drama; 60 min.
While working as technical advisors on a film, Charlie and Kaz (John Ashton, Richard Tyson) also assist in guarding an actress whose attacker has just been paroled.
[At press time, it was likely that NBC would air this episode and not the one described in NBC’s ad for the program.]

The 1989-1990 television season is in full swing and TV Guide continues its coverage of the new season in this issue. The article about stars to keep an eye on may have been interesting to viewers when it was published 30 years ago. It’s not very interesting to read today. On television, two new shows (Booker on FOX and Living Dolls on ABC) debuted this week. CBS aired two episodes each of new shows Island Son and Wolf in the hopes of attracting viewers.

That’s it for this issue. Check back next week for my review of the September 30th, 1989 issue of TV Guide. As always, hit the comments with any thoughts or reactions.