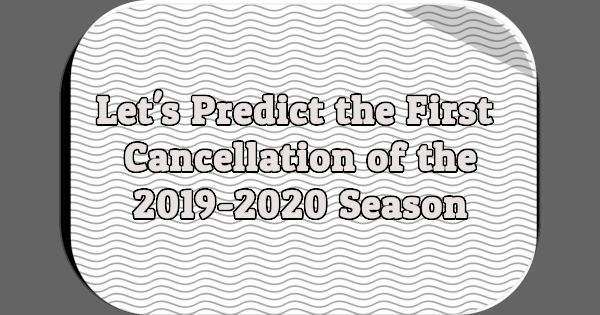 A new television season is upon us. The 2019-2020 TV season officially begins tonight. Since 2009, I’ve asked readers to predict which new fall TV show will be cancelled first. I considered renaming my annual “First Cancellation” post to something like “Let’s Predict the Biggest Flop of the 2019-2020 TV Season” but decided to put “Cancellation” in quotes instead.

Network TV has changed dramatically over the past decade and this new TV season likely won’t see the sort of quick cancellations common five or ten years ago. The broadcast networks will roll out more than a dozen new shows over the next few weeks. Daily and weekly ratings will be released and discussed and analyzed (by both experts and amateurs). Rather than cancel low-rated new shows, the networks will instead either cut back the number of episodes they ordered or do nothing.

So, rather than predict which new fall show will be cancelled first, should we try to guess which show will end first? That depends on so many factors, ranging from debut date to number of episodes produced not mention ratings and critical acclaim.

Two sitcoms can claim they were the first cancellation of the 2018-2019 TV season. FOX’s Rel ended its run on January 6th, 2019. More than three months later in April, FOX cancelled the show. Meanwhile, NBC’s I Feel Bad aired for the last time on December 27th, 2018 but wasn’t officially cancelled until May. Which was the first cancellation of the season? I vote I Feel Bad, because it went off the air first.

What do you think will be the first “cancellation” of the 2019-2020 season? Which new network show will end its run first? Will any of these shows perform so poorly they get yanked of the air? Share your thoughts in the comments.