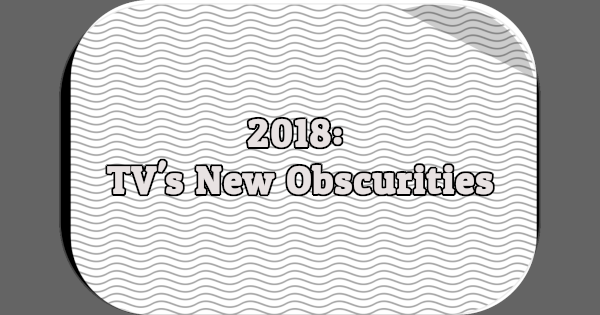 The new year is upon is, which means it’s time to look back at the forgotten (or soon to be forgotten) network television shows from 2018. This is my 11th annual review of “new obscurities” and it may be my last. Every year it becomes harder to draw the line between a successful network TV show and a flop. They’re all relatively obscure to the millions of viewers who either don’t watch network television or don’t realize the shows they’re streaming on Amazon Prime, Hulu, or Netflix originated on network television.

In the past, I’ve called any scripted, network TV show that aired 13 episodes or fewer a new obscurity. By that definition, 2017 produced 22 new obscurities, down two from 2016.

It’s too soon to know which of last fall’s new network TV shows won’t return next season. The networks likely won’t make any official announcements concerning cancellations or renewals until May when schedules for the 2019-2020 TV season are released. Quite a few shows have been picked up for the rest of the 2018-2019 season: The Kids Are Alright and Single Parents on ABC, FBI and The Neighborhood on CBS, Charmed on The CW, The Cool Kids and The Resident on FOX, and New Amsterdam on NBC. Each of these shows received the traditional 22 episode “full” season order.

But what about the new shows that were picked up for fewer episodes? Three shows will run for just 16 episodes: Manifest (NBC), All American (The CW), and Legacies (The CW). A Million Little Things (ABC) will produce 17 episodes. The Rookie (ABC), Magnum P.I. (CBS), and God Friended Me have all been picked up for 20 episodes, two shy of a “full” season.

(The Conners, ABC’s continuation/spin-off of its Roseanne revival, will run for 11 episodes. Over on CBS, the Murphy Brown ended after 13 episodes but the network insists that was the plan all along and the show may return for the 2019-2020 season.)

That leaves just three new fall shows at or under my 13-episode cut-off for new obscurity status: Rel (FOX), I Feel Bad (NBC), and Happy Together (CBS). If all three are cancelled, that will mean 2018 produced 13 new obscurities. Add in The Conners and Murphy Brown if they don’t return next season, and the total climbs to 15.

Last year, I wondered if it was time to reconsider how many episodes a network TV show can produce and still be deemed a “new obscurity” after its cancellation. If NBC decides not to renew Manifest for a second season, for example, 15 episodes won’t make it any less “obscure” than 13 episodes.

In a few months, when the networks make their official cancellations, I’ll revise this list. Depending on which shows are cancelled, I may decide to finally update my definition of a new obscurity.

Were you or are you currently a fan of any of the TV shows listed above? How many have you never heard of? Hit the comments with your thoughts.