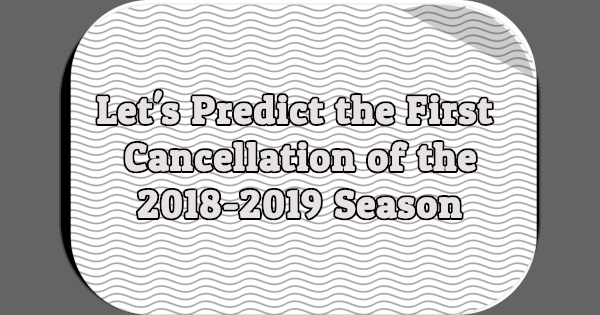 The 2018-2019 television season gets underway tonight. Every year since 2009, I’ve asked readers to predict which new fall TV show will be cancelled first. Given how the networks are loath to actually cancel new shows these, it may be months (or longer) before the first true cancellation is announced. However, we will likely know much whether any of the 18 new network shows debuting in the coming weeks are doomed, even if the networks refuse to make the inevitable cancellations official.

Viewers have already had the chance to watch “sneak previews” of two new shows: Rel on FOX and I Feel Bad on NBC. Many more will premiere over the course of the next two weeks. Low ratings don’t mean nearly as much as they did a decade ago or even five years ago. Shows with few viewers and seemingly weak demographics can survive for reasons we as viewers may never fully understand. That doesn’t mean we can’t make our best guesses.

Over 630 votes were cast in last year’s “First Cancellation” poll. Let’s see if we can beat that total this year. Cast your vote for the first cancellation of the 2018-2019 season now.

During the 2016-2017 season, the networks refused to officially cancel any of their new fall shows until May. The first cancellation didn’t come until February 2017 when CBS pulled its mid-season replacement Doubt off the air after just two episodes. The network later burned off the remaining 11 episodes during the summer.

Two shows can claim they were the first cancellation of the 2017-2018 season. ABC pulled new drama Ten Days in the Valley from its scheduled on October 26th, 2017 after just four weeks. But the network didn’t officially cancel it and, starting in December, began burning off the remaining episodes on Saturdays. Less than a week later on November 1st, CBS pulled its new sitcom Me, Myself & I after six weeks, effectively cancelling it. The remaining episodes didn’t air until the summer.

So, which show was the first cancellation of the 2017-2018 season? I think that dubious honor should go to Me, Myself & I.