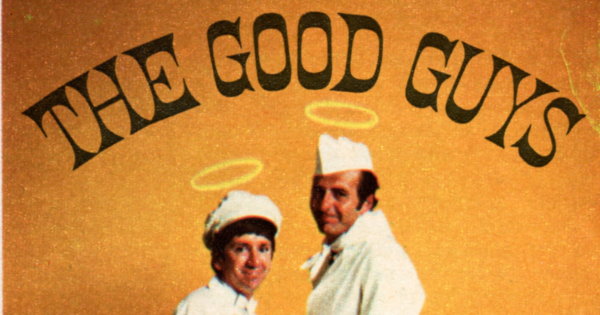 Forgotten CBS sitcom The Good Guys celebrates its 50th anniversary today. It premiered on September 25th, 1968. Bob Denver and Herb Edelman star as best friends Rufus and Bert, with Joyce Van Patten as Bert’s wife, Claudia. Rufus is a cab driver and Bert runs his own diner. The two keep getting caught up in get-rich-quick schemes that inevitably fail.

Check out my in-depth article about The Good Guys.

Most critics were not kind to the show when it debuted. George Gent, reviewing the first episode for The New York Times, called it “a waste of precious air time.” The Milwaukee Journal‘s Wade H. Mosby, on the other hand, lavished praise on Edelman, predicting he and Denver “might be the new season’s comedy click.”

Denver’s former Gilligan’s Island co-stars Alan Hale and Jim Backus each appeared in three episodes during the 1968-1969 season. CBS renewed the show for a second season but insisted on reworking the show. Gone was the live studio audience, replaced by a canned laugh track. Rufus gave up his cab to run a new diner with Bert.

Only 17 episodes aired during the 1969-1970 season. The final episode aired on January 23rd, 1970. The Good Guys never aired in syndication in the United States. It may have aired internationally, however.

Famed custom car designer George Barris built the custom taxi driven by Rufus in the show. MPC released a 1/25th scale model of the taxi in 1968.

There used to be a fan site dedicated to the show, with a lot of information and pictures, but it seems to have disappeared.

Do you remember watching the premiere of The Good Guys 50 years ago in 1968? Hit the comments with your memories of this forgotten sitcom.

4 Replies to “50th Anniversary of The Good Guys”