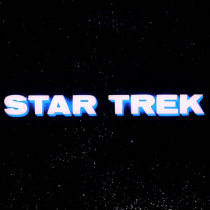 You can’t call anything about it obscure but I would be remiss if I didn’t take some time to celebrate the 50th anniversary of Star Trek. It is one of television’s most famous/iconic/influential shows. More has been written about Star Trek than perhaps any other TV show in history. Its history has been told and retold and retold again.

Were you watching the “sneak preview” of Star Trek (“The Man Trap”) on Thursday, September 8th, 1966 on NBC? If so, are you still a fan five decades later?

I’ve written about Star Trek here at Television Obscurities several times over the past decade. My article A Look at Star Trek attempts to determine what impact, if any, demographics had on the cancellation of the series.

Here are some of my blog posts relating to Star Trek:

Today, however, I have nothing new to offer other than a brief personal reflection.

Growing Up With Star Trek

I’ve been a fan of the Star Trek franchise practically since birth. I grew up watching syndicated repeats of Star Trek alongside new episodes of Star Trek: The Next Generation. The original series isn’t my favorite and I haven’t seen every episode. When the “remastered” episodes began airing back in 2006 I watched a few but I don’t like the new special effects.

As a kid, it was so easy to be a fan of Star Trek: The Next Generation. It was new, for one thing, and didn’t look as corny as Star Trek. But it was the toys and collectibles that really did it. I’ve got action figures, playsets, magazines, books, and so much more. I think the only Star Trek toy I have is a Playmates phaser my grandmother bought me. I remember my mom being upset because, unlike the Star Trek: The Next Generation phaser, the Star Trek one actually looked like a gun.

The last time I watched an episode of Star Trek was the day Leonard Nimoy died last February. As a tribute to him, I watched the original unaired pilot episode (“The Cage”) on Netflix.

It’s an interesting time for Star Trek–both the original series and the franchise overall. The reboot movies offer a different take on the original series–which of course makes them controversial among Trek fans. A new TV series called Star Trek Discovery debuts in January, with the premiere airing on CBS before the show moves to the CBS streaming service. I’m tentatively excited but not looking forward to paying for CBS All Access.

The amount of merchandise being released in connection to the 50th anniversary is staggering. I do hope to pick up some of the Star Trek stamps later this week but that’s about it.

Then there’s the Roddenberry Vault Blu-ray set coming out on December 13th. It includes 12 episodes of Star Trek, all of which have been released at least twice on Blu-ray already. The big selling point is the inclusion of unseen footage from the series: alternate takes, outtakes, deleted scenes, and more. Here are some preview videos:

I am very excited to see all these footage but not excited at all about having to pay almost $80 for the set. Hopefully the price will come down quickly after the holidays.

What does the 50th anniversary of Star Trek mean to you? Hit the comments with your thoughts.