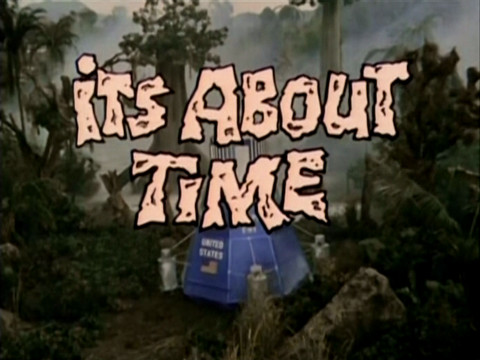 Today marks the 50th anniversary of It’s About Time, a one season wonder with a memorable theme song. The sitcom premiered on CBS exactly 50 years ago today on Sunday, September 11th, 1966. A total of 26 episodes were broadcast over the course of the 1966-1967 season. My article about the series can be found here.

It’s About Time costarred Imogene Coca and Joe E. Ross as two of the cave people. Coca’s character was originally named Shag in the pilot episode but it quickly changed to Shad (sometimes spelled Shadd) for a reason that seems obvious to me but apparently escaped all involved in creating the show.

Rounding out the cast were Cliff Norton, Mike Mazurki, Pat Cardi, and Mary Grace. All four were technically recurring characters credited in the closing credits rather than the opening credits.

The first 19 episodes of It’s About Time followed the adventures of the poor astronauts as they struggled to repair their damage space capsule so they could return to the 20th Century. The two made many mistakes like trying to bring democracy and feminism to the cave people. They also often got themselves condemned to death for causing a drought or disturbing the volcano gods.

Low ratings convinced Schwartz that drastic changes. He decided to flip the premise and bring the cave people to the 20th Century. Hilarity ensued. They didn’t know what a television was or a vacuum cleaner or a car. A new recurring character–the manager of the apartment building where the astronauts lived–was added, played by Alan DeWitt. The new and improved It’s About Time lasted for just seven episodes before CBS pulled the plug.

As far as I know, It’s About Time was never syndicated after its cancellation until last year when it began airing on Antenna TV. The diginet has cycled through all 26 episodes at least four times. I can’t imagine a lot of people are watching it but I enjoyed it. It was a chore at times to listen to the broken English spoken by all the cave people–it must have been torture for the actors and actresses.

As we celebrate the 50th anniversary of It’s About Time, I have a few questions for those of you who watched it back in the 1960s:

Hit the comments with your memories of It’s About Time.

10 Replies to “50th Anniversary of It’s About Time”