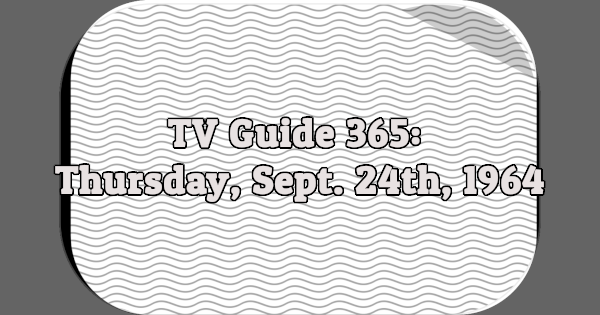 FLINTSTONES (ABC)
[COLOR] “Monster Fred.” Fred goes to see Dr. Frankenstone after a head injury leaves him with the mind of a child.

8:00 PERRY MASON–Drama (CBS)
“The Case of the Missing Button” opens this series’ eighth season on TV, this year in a new time slot. Five-year-old Button Blake has a four-million dollar trust fund and two estranged parents. Dirk Blake is out to prove that his wife is an unfit mother when a murder warrant is issued for his arrest. (60 min.)

DONNA REED (ABC)
The Stone household and neighborhood are endangered when Alex’s father comes to town–complete with aging auto and blackstrap molasses.

8:30 DR. KILDARE–Drama (NBC)
“Man Is a Rock” starts the series’ fourth season. Hard-driving salesman Franklin Gaer lives only for his business, and even a heart attack fails to convince him that he may also die for it. Written by Christopher Knopf. (60 min.)

MY THREE SONS–Comedy (ABC)
Predatory females are out to snare Robbie, Ernie and Bub. And of the three, only Robbie seems willing to be trapped.

BEWITCHED (ABC)
Samantha and her mother Endora inspect the new house that Darrin wants to buy, and mother startles the neighbors when she tries some “instant landscaping.”

9:30 HAZEL (NBC)
[COLOR] “Ain’t That a Knee Slapper?” George gets the feeling that Hazel’s primitive sense of humor is slowing up at his attempt to arrange a merger between Mr. Griffin and Griffin’s competitor, Josh Egan.

PEYTON PLACE (ABC)
After a visit to Dr. Rossi, Betty realizes she faces a decision that will affect not only her life, but also the lives of many others in Peyton Place.

10:00 DEFENDERS–Drama (CBS)
“The Seven-Hundred-Year-Old Gang,” a two-part comedy-drama, is the first new show of the season as the series moves to this new time slot. Police raid the home of attorney Sheldon Lowell, who didn’t know that the wine his father-in-law had been making in the basement was being sold illegally. David Karp wrote the script. (60 min.)