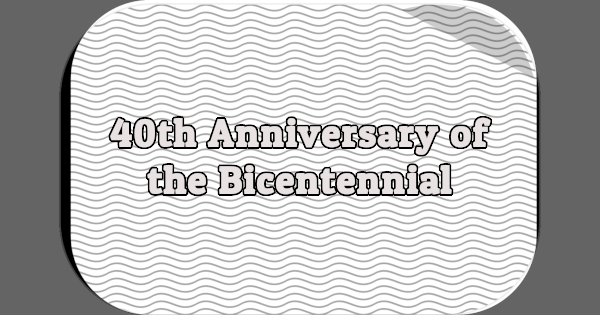 Happy Fourth of July, everyone. Today the United States of America celebrates its 240th birthday. That means today is also the 40th anniversary of the Bicentennial. According to Broadcasting, the networks knew their TV coverage of the Bicentennial wasn’t going to draw huge ratings. Viewers were more likely to head outside to celebrate rather than stay home and watch television. That didn’t stop NBC, for example, from spending $1.5 million to provide over 95 remote broadcasts involving more than 1,200 NBC News personnel.

Here’s a brief look at how ABC, CBS, and NBC covered the Bicentennial on Sunday, July 4th, 1976, drawn from TV listings published in The New York Times. If you watched any of these programs that day, hit the comments with your memories.

ABC opted not to devote its entire broadcast day to Bicentennial coverage. The network aired two hour-long specials under the “Great American Birthday Party” title from 10:30-11:30AM and 1:30-2:30PM. They featured President Ford’s addresses from Valley Forge and Independence Hall, Operation Sail, and the National Folk Life Festival.

At 7PM, ABC aired “The Glory Road West,” the second special under The American Idea banner. That was followed at 8PM by the 1973 movie The New Land. ABC wrapped up the Fourth of July with a final hour-long “Great American Birthday Party” recap special from 10-11PM.

CBS: In Celebration of Us

CBS had the most extensive coverage, airing “In Celebration of Us” practically all day. Walter Cronkite anchored the network’s Bicentennial coverage, with began at 8AM. Featured guests were Alistair Cooke, Valerie Harper, Beverly Sills, and Archibald MacLeish.

“In Celebration of Us” ran uninterrupted until midnight with the exception of two breaks: one from 6-7PM for local and network news and another from 11-11:30PM for network news. The final 11:30PM-12AM half-hour was a recap of the day’s events.

John Chancellor and David Brinkley returned at 10PM for “The Best of the Fourth,” an hour-long recap special highlighting the day’s events.

5 Replies to “40th Anniversary of the Bicentennial”