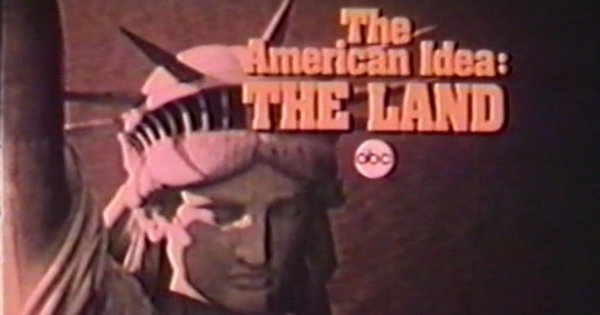 ABC planned to air three specials about the history of the American people under “The American Idea” title, but only two were produced. The network broadcast the first in 1973 and the second in 1976.

The American Idea was the umbrella title for a planned series of standalone, hour-long TV specials that would explore the history of the people of the United States by combining narration drawn from period texts with contemporary film footage, much of it vivid aerial shots of the country. The specials would be produced by Alan Landsburg Productions and aired on ABC. Starting in October 1972, Variety included The American Idea in its TV Film Production Chart on almost a weekly basis. Listed were titles and key production personnel for three episodes: “The Land,” “Cowboys and Indians,” and “Immigrants” [1].

Only “The Land” would make it to the air, however. It was broadcast on Sunday, March 18th, 1973 from 8-9PM. It focused on the pioneer spirit of early America and one of its founding principles: the right of every man to own his own land. William T. Cartwright produced and directed the special with Landsburg and Laurence D. Savadove serving as executive producers.

“The Land” was jointly hosted by Edward G. Robinson, Cloris Leachman, Dick Van Dyke, and Henry Fonda. It was one of Robinson’s last projects; he died in January 1973 less than three months before it aired. The four provided narration, reading from pioneer journals and early writers. Richard Rodgers wrote the musical score for the episode while the Roger Wagner Chorale provided a number of early folk songs, some sourced from the Library of Congress [2]. The special was sponsored by The Ford Motor Company. Newspaper television listings and advertisements referred to it as Part 1 of The American Idea series.

A few months after “The Land” was aired, Ossie Davis and Greer Garson were announced as hosts-narrators for “The Promise,” the second installment of The American Idea [3]. Like the earlier titles listed in Variety, this special was also never produced.

In 1974, Prentice-Hall published three books based on The American Idea: Sweet Land, Sweet Liberty!, The Early American Cookbook, and The Early American Songbook. Xerox Films released a pair of 16mm color films in 1975 that were edited from “The Land” and intended for classroom use. Each ran 21 minutes.

It would be more than three years before The American Idea returned to television. As part of the network’s Bicentennial celebration, ABC broadcast “The Glory Road West” on Sunday, July 4th, 1976 from 7-8PM. The special highlighted the American West and the various people found there, from gold miners to railroad workers, from Native Americans to cowboys. It was aired under ABC’s “The American Spirit” banner. Returning as executive producers were Alan Landsburg and Laurence D. Savadove. Also returning was Henry Fonda as special guest narrator, joining Chad Everett and Buffy Sainte-Marie. “The Glory Road West” was written, directed and produced by Terry Sanders.

It was an atypical night for television, with many viewers out celebrating rather than watching TV. “The Glory Road West” aired opposite Bicentennial specials on the other networks: “In Celebration of Us” on CBS and “Happy Birthday, America” on NBC. It averaged a 5.7 rating and a 20% share of the audience based on preliminary Nielsens [4]. It was the lowest-rated program of the night.

No further installments of The American Idea were ever aired. Exactly why the original plan for a three-part series was abandoned is unknown. Perhaps “The Land” was not well received by viewers, leading either Alan Landsburg Productions, The Ford Motor Company or ABC to rethink additional episodes.

3 Replies to “The American Idea (Specials)”