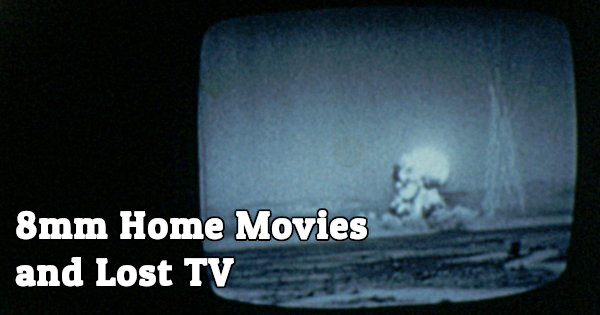 It may be hard for anyone born after 2000 to believe but there was a time before cell phones, before anyone and everyone could easily record video. The earliest home movies were made using 16mm film, which Eastman Kodak unveiled in 1923. Originally only black-and-white, color Kodachrome 16mm film was introduced in 1935.

A cheaper alternative came along in 1932 when Kodak starting selling standard (or regular) 8mm film. The new 8mm cameras were smaller and easier to move around. An improved version called Super 8 came along in 1965 while sound was added in 1973.

Between the two formats, it’s possible that someone could have recorded the earliest experimental TV broadcasts in the late 1920s and early 1930s–but probably didn’t.

It may seem like wishful thinking but is it possible someone with a 16mm or 8mm camera may have, intentionally or not, recorded footage of TV shows that are otherwise lost? An amateur kinescope process, if you will. Imagine what could be hidden away in closets, attics, or basements.

Early TV sets were expensive. So were early film cameras and film stock. It therefore makes sense to assume a family wealthy enough to afford a TV set in the 1920s or 1930s may also have purchased a 16mm film camera. At least one family in New York City did. How do we know? Because one of the earliest surviving examples of television in the United States–scenes from an August 1939 broadcast by RCA/NBC’s experimental station WX2BS in New York City–was recorded by someone using a 16mm camera.

The March 1949 issue of Popular Photography included a letter to the editor reporting success making movies of TV broadcasts. It’s not specified whether a 16mm or 8mm camera was used.

Clearly, there were people who pointed their film cameras at their TV sets in the 1930s and 1940s. There’s no way to know how many people did this, how often they did it, or whether their home movies still exist. I’m focusing on 8mm home movies more than 16mm because by the 1950s, 8mm cameras were more widespread.

Doctor Who & I Love Lucy

I can’t think of any TV shows from the United States that only exist as fragmentary 8mm home movies. Doctor Who is a different story. A total of 97 episodes of the long-running BBC series are missing and presumed lost. An Australian fan recorded roughly 15 minutes of Doctor Who in the mid-1960s from a TV set. This footage includes several scenes from missing episodes.

Rare behind-the-scenes footage from various TV shows like I Love Lucy (in color!) and Star Trek exists because someone on set had an 8mm camera running. Some of this footage has been released on DVD or Blu-ray. In the case of Star Trek, background actor Billy Blackburn recorded more than an hour of footage between 1966 and 1969. He also had his camera on the set of My Favorite Martian. You can find 8mm home movies from The Andy Griffith Show, Lost in Space, and Hogan’s Heroeson various DVD sets as well.

Some Examples of 8mm TV Footage

Poke around YouTube long enough and you’ll find a handful of videos of 8mm home movies that include footage taken from TV screens. Here are some I’ve come across:


As you can seen, the quality varies greatly depending on how the TV sets were filmed and how the resulting home movies were digitized.

Last year, I had a collection of 8mm home movies taken by a relative professionally digitized in HD. It was expensive but now my family has this priceless footage preserved. Honestly, I didn’t consider the possibility that I might find footage taken from a TV set.

But that’s just what I found. There’s not much of it. It’s also not much to look at. The first bit of footage is from January 1956. It’s about 10 seconds of a child sitting in front of a TV. Although dark and grainy, the opening credits of The Mickey Mouse Club are clearly playing on the TV set.

The second piece of footage is from around 1970. Whoever was filming pointed the camera directly at the black-and-white TV set. There’s roughly one second of a scene in which three people appear to be having a conversation. The top of the TV set is cut off so their faces aren’t visible:

This is followed by just under seven seconds of a nuclear explosion. This time, the camera was positioned to capture the entire TV screen:

So what is this footage? Two scenes from an episode of an unidentified TV show? An actual nuclear explosion broadcast during the news or as part of a documentary? I have no clue. Does anyone recognize it?

What Could Be Out There?

I’ve yet to look through all my family’s 8mm home movies so maybe I’ll find something interesting.

The odds are low that someone used a 16mm or 8mm camera to record the televised opening of the 1939 World’s Fair in New York City. If someone did, and the footage is on a reel of home movies in a box under a bed somewhere, finding it would be a pretty big deal.

Imagine being able to see even a snippet of Faraway Hill (DuMont, 1946) or Hour Glass (NBC, 1946-1947) thanks to a 70-year-old reel of 8mm film? It’s exceedingly unlikely to happen–bordering on impossible–but you never know what might be out there.

Did you or a family member try pointing an 8mm camera at a TV set? Were you successful? If so, what did you record and do you still have the film reels? Hit the comments with your thoughts.