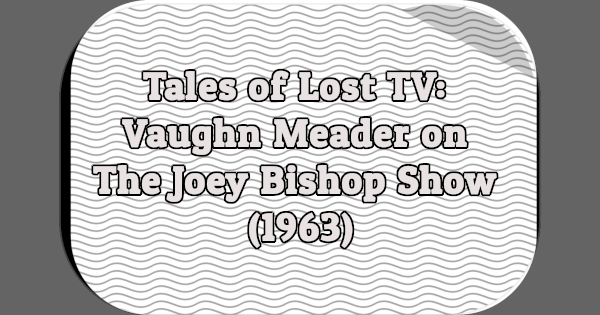 Tales of Lost TV is a monthly column in which I examine a particular TV program either known or believed to be lost forever. The amount of lost TV is truly staggering–aside from a handful of exceptions everything broadcast prior to 1948 no longer exists. That doesn’t mean it all has to be forgotten.

In last month’s inaugural Tales of Lost TV column I wrote about a TV program from 1944 called “Folksay” that’s lost because no recordings were made (although photographs exist). Today I’m writing about an episode of The Joey Bishop Show believed to be lost because it was destroyed.

For a brief time in the early 1960s, Vaughn Meader was a very famous man, thanks to the skilled impersonation of President John F. Kennedy. In October 1962, Meader and others recorded a comedy album titled The First Family spoofing the Kennedy clan. The album sold millions of copies following its November 1962 release and went on to win the Grammy Award for Album of the Year in 1963.

Meader was suddenly in demand and television soon came calling. He made appearances on The Jack Paar Program and What’s My Line? in December 1962, the prime time To Tell the Truth in January 1963, and The Andy Williams Show in March 1963.

A second album, The First Family – Volume 2 followed in May 1963. It was nowhere near as popular as the first. Before long, Meader grew tired of being known only for his Kennedy impersonation. He spoke to the Associated Press in November 1963 about his frustration:

I’ve seen too many acts in show business get a big play because of a single specialty and then fade as the novelty wears off. It’s not as though I can do only one thing. I’ve had other aspects to my career, starting in the country and western field, then working as a piano comedian and as a standup comic. I’m not ungrateful for “The First Family.” It accomplished overnight what would have taken me four or five more years in terms of public acceptance. But I just want to show that I can do something else.” [1]

Only a day or two after newspapers published the Associated Press article about Meader, President John F. Kennedy was assassinated.

The Death of a President

President Kennedy was shot and killed in Dallas on Friday, November 22nd, 1963. The networks quickly cut to special reports. For the next four days, TV covered nothing but the national tragedy. Regular programming didn’t return until after Kennedy’s funeral on Monday, November 25th.

A few days after Kennedy’s funeral, Vaughn Meader announced through his manager he would never again impersonate President Kennedy [2]. The First Family and The First Family – Volume 2 were pulled from some stores. The company that produced the albums declared “No new records of either album will be produced again under any circumstances” [3].

Once regular programming resumed, the networks carefully looked for anything that could be considered inappropriate in light of President Kennedy’s death. ABC cut him out of the November 30th episode of Hootennany. CBS postponed Meader’s stint as guest panelist on its daytime game show To Tell the Truth, scheduled to start on Monday, December 16th [4].

(Meader later appeared in the March 7th, 1964 episode of Hootenanny. It’s unclear whether he actually taped any episodes of To Tell the Truth. According to a January 1964 article in The New York Times, he was scheduled to appear on To Tell the Truth at some point during the week of February 3rd [5].)

NBC also cut a segment featuring Meader from “The Best on Record: The Grammy Awards Show” [6]. It was supposed to air on Sunday, November 24th. Instead, NBC broadcast the special–minus Meader–on Sunday, December 8th.

Meader and The Joey Bishop Show

NBC knew right away what it had to do with an episode of The Joey Bishop Show guest starring Vaughn Meader. He taped his episode on November 15th and the network had planned to broadcast it at some point in February 1964 [7]. The plot involved Joey, who in the sitcom had his own variety show, confusing Vaughn Meader with the real President Kennedy. During the episode, Meader sang a few folk song parodies drawn from his nightclub act.

“The tape has been erased,” reported The New York Times on December 1st [8]. According to the Associated Press, the show’s producers “scrapped” the episode, which prior to taping Meader claimed would be his last time impersonating President Kennedy [9].

The episode (which may have been titled “Joey Goes To Washington”) also featured guest stars Andy Williams, Danny Thomas, and Milton Frome.

November 18th, 2016 Update: A search of the United States Copyright Office reveals no entry for this episode.

Vaughn Meader’s career never recovered. A new comedy album came out in 1964, titled Vaughn Meader – Have Some Nuts!!!, but it didn’t sell well (he actually recorded it in November 1963). He continued performing in nightclubs for a while with a reworked act removing all Kennedy material but his connection to the late president was too great.

Hit the comments with your thoughts. If anyone has more information about Vaughn Meader’s episode of The Joey Bishop Show, please let me know. There must be a copy of the script somewhere.