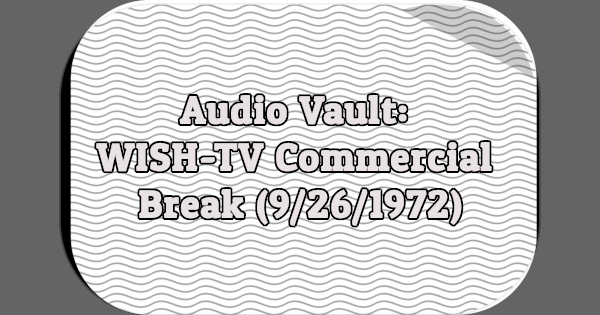 This particular commercial break aired on prior to the WISH-TV Big News at 10. It’s incomplete and starts partway through a political ad for George McGovern. Also included is a local news promo and two commercials, one of which is local.

[Incomplete George McGovern Political Ad] “–a lot of, amount of money, you know. But I did support McGovern as much as I could. Five dollars now. Ten dollars one time. You can go without a dress and you could wear the things that you’ve had for some time and send five dollars to someone that you think is, will do something for our country. McGovern. Democrat. For the people. The people are paying for this campaign with their hard-earned dollars. Send what you can to McGovern for President, Washington, DC.”

Notice how the beginning of the local promo for WISH-TV’s Big News Final is cut off. It’s possible the McGovern ad aired during a different commercial break. It’s difficult to tell with only the audio to go by.