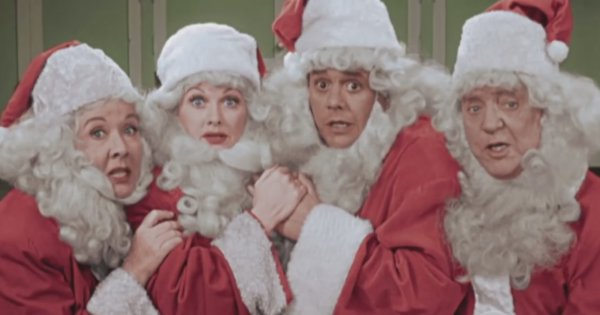 CBS will broadcast two hour-long specials featuring colorized episodes of I Love Lucy and The Dick Van Dyke Show next month. The specials will air back-to-back from 8-10PM ET on Friday, December 14th. As always, both specials “seamlessly combine” the opening and closing credits for the episodes included.

Here’s a look at every colorized I Love Lucy episode since 2013:

December 2015
“The Christmas Episode”
“Lucy Does a TV Commercial”

December 2016
“The Christmas Episode”
“Lucy Gets in Pictures”

“The Christmas Episode” and “Lucy’s Italian Movie” were released on DVD in November 2013 alongside a third episode (“Lucy Goes to Scotland”) colorized in 2007 for the I Love Lucy complete series DVD box set. The episodes aired in May 2015 and May 2016 have also been released on DVD.

This year’s special offers viewers the chance to view “Where Did I Come From” (from January 1962) and “Never Bathe on Saturday” (from March 1965) in color. Carl Reiner, who created and co-starred in The Dick Van Dyke Show, personally picked these episodes to showcase Dick Van Dyke’s physical comedy. Reiner is also serving as an executive producer for the special. An official press release for “The Dick Van Dyke Show – Now In Living Color!” can be found here.

And here’s a look at all of the colorized episodes of The Dick Van Dyke Show CBS has aired since 2016:

The 2016 edition of “The Dick Van Dyke Show – Now in Living Color!” is available on DVD and Blu-ray.

To Color or Not to Color

You might be wondering why I’ve been keeping track of the CBS colorized specials since 2013. I Love Lucy and The Dick Van Dyke Show aren’t obscure TV shows. Nor were they short-lived TV shows. Truthfully, I think it’s because I want to support CBS for its willingness to air episodes of TV shows from the 1950s and 1960s–even if they are in color.

As a general rule, I don’t support colorization. I think black-and-white TV shows (and movies) should always be seen in their original monochrome glory. However, the only reason CBS keeps airing these specials is because they’re in color. If watching colorized episodes of I Love Lucy or The Dick Van Dyke Show means a few younger viewers become interested in classic TV, I won’t complain.

Hit the comments with your thoughts. Will you be watching either of these specials next month? Do you support colorizing classic TV shows?