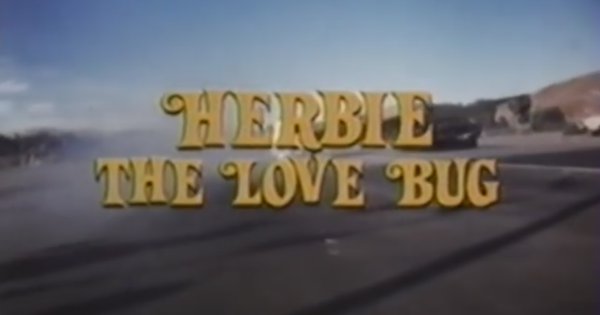 I’m curious for more information on the short-lived Herbie the Love Bug series on CBS. I know it ran for only a handful (5 or 6) episodes, and was unusual in that it was an hour-long comedy; it definitely skewed toward a family audience. I believe all the episodes are available on YouTube, and judging from the screen bugs on those videos, it was rerun on the Disney Channel at least once.
Thomas

Herbie the Love Bug was one of three limited-run shows CBS introduced in March 1982. The network overhauled its Tuesday and Wednesday lineups, hoping to attract more viewers. The other shows were sitcom Baker’s Dozen and drama Q.E.D., both of which ran for six weeks. Herbie ran for just five. Walt Disney Productions produced Herbie the Love Bug, which explains why it later aired on the Disney Channel.

Dean Jones, who starred in the original 1968 film The Love Bug (and one of its sequels, 1977’s Herbie Goes to Monte Carlo), returned to the role of race car driver Jim Douglas. Now retired, Jim runs a driving school with his friend Bo Phillips (played by Richard Paul). When Herbie and Jim stop a back robbery, Jim meets divorced mother of three Susan MacLane (played by Patricia Harty) and the two fall in love. Her three children were payed by Claudia Wells, Douglas Emerson, and Nicky Katt. Larry Linville played Susan’s ex-husband, Randy.

Here are the opening credits, with a theme song sung by Dean Jones:

The series premiered on March 17th, 1982. I found two reviews, both of which were quite negative. Owen McNally, writing for The Hartford Courant, had this to say:

Unfortunately, Herbie is surrounded by a very dull cast of human actors. Herbie is a car with human qualities, but the actors are like humans with the qualities of a car — and very sluggish cards at that.

Perhaps Jones’ bland and somewhat sluggish condition has been brought on by having had to play second banana to a car for all these years. If Jones looks as if he needs his battery recharged or at least some air put in his tires, the plot itself seems in dire need of a major tuneup.

The debut tied for 37th for the week. I don’t know how the other four episodes performed but presumably they didn’t draw a large enough audience to convince CBS to bring the show back during the 1982-1983 season.

My 91-year-old cousin remembers being in a United Artists sponsored pilot with Luther Adler and John Conte. Sometime in the 1950’s filmed in New York. It never may have never aired but they made several episodes. The premise was about people calling wrong numbers. She believes that was the title, Wrong Number. Would love to know if there is information out there.
Jeanne

I found a handful of references to an unsold pilot titled “Wrong Number” that was filmed in New York City in 1955. John Christian produced and directed the half-hour pilot. He was the director of Guerilla Girl, which likely explains how your cousin got the job. Planned as an anthology series, Luther Adler may have been the host. The articles I found aren’t clear. He also apparently starred in the pilot alongside John Conte. The plot involved a murderer accidentally calling his intended target.

I found no connection to United Artist, although that doesn’t mean the company wasn’t involved in producing the pilot. As far as I can tell, only the pilot episode was filmed. It never aired, however, because the show wasn’t picked up.

Did you watch Herbie the Love Bug on CBS in 1982? Do you have any additional information about unsold pilot “Wrong Number”? Hit the comments with your memories and thoughts.