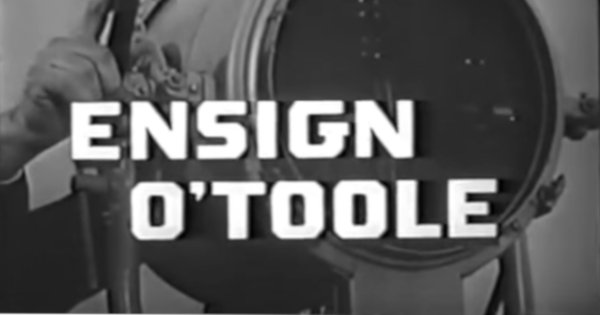 Wondering if you write up anything about this show. I have been watching this on Get TV. It seems to be a very good show with a good cast. It only ran one season but ABC must of had so intrest in it since they ran the reruns from March to September of 1964. Was the show that bad in the ratings or did something else cause the show to run only one season.
Dennis

One season wonder Ensign O’Toole starred Dean Jones as the title character, a U.S. Navy ensign assigned to the fictional USS Appleby. Jay C. Flippen, Jack Mullaney, Jack Albertson, and Harvey Lembeck co-starred. The sitcom ran for 32 episodes on NBC during the 1962-1963 season. It aired from 7-7:30PM ET on Sunday evenings, opposite Lassie on CBS and repeats of Father Knows Best on ABC.

Here are the opening credits:

Why did NBC cancel the show after a single season? I don’t know for sure but the decision to axe Ensign O’Toole likely came down to ratings. Lassie beat Ensign O’Toole in the Nielsen ratings, helped by a stronger lead-in. Also, sponsors Chesterfield and Ford apparently weren’t happy with the show airing Sundays at 7PM ET. They wanted the show to move to a later time slot, likely in the hopes of drawing an older audience rather than just children. NBC either wouldn’t or couldn’t find a new home for the show.

So, it likely came down to a combination of unhappy sponsors and unsatisfactory ratings.

As for why ABC purchased repeats of Ensign O’Toole to air in 1964, it must have been cheaper for the network to purchase the rights to a cancelled NBC show than pay for an entirely new show.

I recall a “Dr. Coffey” who solved mysteries using his scientific lab for proof. The show would have been on one of the three networks late 1950’s or very early 1960’s. It wouldn’t have been a long series at all. Can you come up with a title and air time?
Gregory

I believe the show Gregory remembers is Diagnosis: Unknown. The medical drama aired on CBS from July to September 1960. Patrick O’Neal starred as Dr. Daniel Coffee, a pathologist who worked with the police to solve crimes. Chester Morris co-starred as Detective Max Ritter with Phyllis Newman as Doris Hudson, Dr. Coffey’s lab technician.

An excerpt from one episode can be viewed on YouTube:

Diagnosis: Unknown lasted just ten episodes. As far as I know, it never aired in syndication following its brief run on CBS.

Did you watch Ensign O’Toole on NBC during the 1962-1963 season? Do you remember Diagnosis: Unknown from 1960? Hit the comments with your memories and thoughts.

4 Replies to “Q & A: Why Was Ensign O’Toole Cancelled; Diagnosis Unknown”