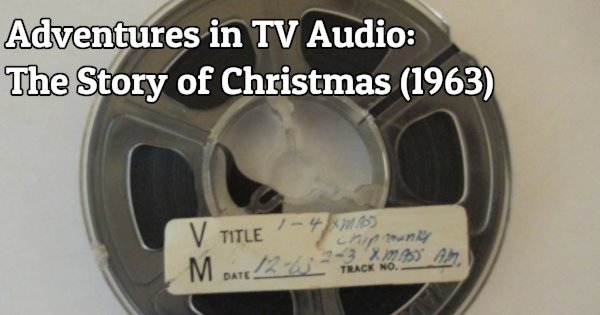 Television is a visual medium. It’s got the word “vision” right there in the name. Television without video is basically radio. Try listening to an episode of your favorite TV show without watching the action on the screen and there’s a good chance you’ll be confused. Nevertheless, audio plays an important role in preserving television history.

Exactly 55 years ago tonight, NBC broadcast “The Story of Christmas,” an hour-long color special hosted by Tennessee Ernie Ford. Joined by the Roger Wagner Chorale and Orchestra, Ford recounted the story of Christmas. The special also featured a lengthy animated segment created by Eyvind Earle, telling the story of the Nativity.

It just so happens a relative of mine purchased a reel-to-reel recorder as a Christmas present for his children in December 1963. To test the machine and demonstrate its capabilities, he recorded audio from “The Story of Christmas” on Sunday, December 22nd, 1963. I believe he used a microphone held up to the TV speaker to record the audio.

Audio from “The Story of Christmas” was recorded at 7-and-a-half inches per second on a 3″ reel, across both the left and right channels of the first side of the tape.

Here, in his own words, is a description of what my relative recorded 55 years ago:

“The rest of the music on this tape is taken from television. It’s children from different lands singing Christmas carols in their own language. And then on the other side of the tape is the story of the donkey that carried Mary and Jesus.”

The first portion of audio consists of roughly four-and-a-half minutes of children singing. Based on the track list consisting of “Xhosa Lullaby” (from Africa) and “Cherry Flower” (from Japan), followed by Tennessee Ernie Ford singing “Some Children See Him.” Here’s a brief excerpt:

The quality is good but not great. Note the sound of the reel-to-reel recorder starting at the beginning.

Then, as promised, there’s approximately three-and-a-half minutes of audio of Tennessee Ernie Ford telling the story of the donkey that carried Mary and Jesus. He then sings “Little Grey Donkey.” Here’s an brief excerpt:

Not Lost or Missing

Capitol Records released a soundtrack album for “The Story of Christmas” in 1964. It was later re-released on CD and is currently available on both Amazon Music and iTunes. Tennessee Ernie Ford Enterprises released the special on DVD in 2006. You can watch the entire “Little Grey Donkey” segment on YouTube:

Clearly, “The Story of Christmas” is not an example of a missing or lost TV program. That means the audio on this reel is not unique or rare or obscure. It is a piece of family history for me but not very important to anyone else.

What if my relative had decided to record audio from a local TV broadcast rather than a network special? How many other people purchased a reel-to-reel recorder as a gift in December 1963, or the year before or the year after? How many of them experimented with recording audio from television? This particular reel may not contain audio from a lost television program, but others might.

Do you remember watching “The Story of Christmas” on NBC in 1963? Did you own the soundtrack album? Hit the comments with your thoughts and memories.