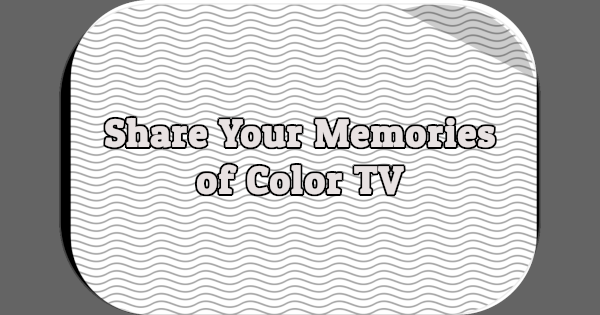 Just last month, BBC News reported more than 7,000 households in the United Kingdom are watching TV in black-and-white. It’s nearly 2019 and thousands of people in the U.K. haven’t switched to color TV.

Growing up as I did in the late 1980s and into the 1990s, I don’t remember a time before color television. I’ve heard stories from my parents, both baby boomers, about growing up in the 1950s and 1960s. When my dad was a kid, he liked Star Trek. His family didn’t have a color TV but his grandparents did. So, it was always a treat when he visited his grandparents and could watch Star Trek in glorious living color.

Like my parents, many of you reading this likely remember the “Color Revolution” of the mid-1960s, when many popular TV shows like Gilligan’s Island, Lost in Space, and I Dream of Jeannie transitioned from black-and-white to color.

How long did you have to wait before your family got its first color set? Were you jealous of neighbors or family members who had a color set before you? Can you remember being frustrated having to watch color shows on your black-and-white TV? When you finally got a color set, were you satisfied with the colors you saw?

I’m also curious to hear from anyone who remembers color television from the 1950s. CBS introduced a limited color schedule in June 1951 but existing black-and-white sets were incompatible with its color system. A competing color system from RCA won FCC approval later that year.

Does anyone remember any of these early CBS color broadcasts, either because you watched them or because you couldn’t watch them? Do you remember when NBC broadcast the 1954 Tournament of Roses Parade in color, marking the first coast-to-coast color broadcast? Did you watch The Marriage on NBC during the summer of 1954, the first network prime time TV series broadcast in color?

When did you get rid of your last black and white TV set? Were you watching television in black and white into the 1970s? Hit the comments with your recollections and memories.