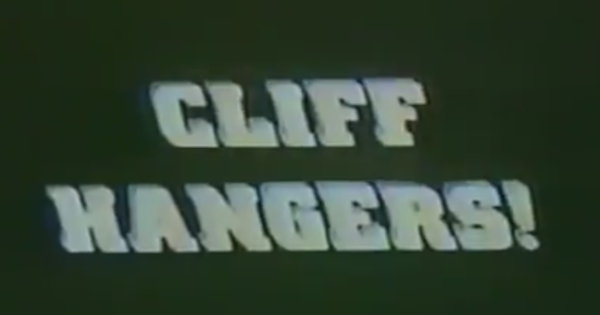 In February 1979, NBC premiered Cliffhangers, an hour-long series made up of three serialized dramas. Despite high hopes for the series, Cliffhangers debuted to low ratings and the network cancelled the show after 10 weeks.

According to The New York Times, when Fred Silverman became president of NBC in June 1978, he immediately ordered 60 pilots, worried that the network’s 1978-1979 line-up would require many replacements in mid-season. In November 1978, shortly before the network would announce its mid-season schedule changes, among the likely candidates for a January or February 1979 slot were Supertrain, Mrs. Columbo, Sweepstakes and Cliffhangers, an hour-long series consisting of three different serials [1].

NBC revealed its mid-season schedule on November 29th. In what Les Brown called “one of the most dramatic midseason revisions of a prime-time program schedule since three-network competition began,” the network cancelled more than half of its current shows. Gone were Grandpa Goes to Washington, Lifeline, W.E.B., The Waverly Wonders, Sword of Justice and Who’s Watching the Kids?. In their place would be nine new shows to be rolled out in January and February 1979, including Cliffhangers [2].

Cliffhangers was given the unenviable task of competing with ABC’s powerhouse sitcom duo Happy Days and Laverne and Shirley, which aired from 8-9PM on Tuesdays. Both shows were regularly among the highest-rated programs on television and Tuesday was ABC’s highest-rated night of the week. According to NBC Entertainment president Myron Weinblatt, “we decided that the place to attack is 8 to 9 o’clock, because we need a lead-in. But how do you go up against ‘Happy Days’ and ‘Laverne and Shirley,’ two of ABC’s biggest winners? We decided to go after the same audience — the youngsters and older people — because the ABC shows are now five years old” [3].

The series, Weinblatt explained, was based on old movie action serials but would be presented “in a larger-than-life, tongue-in-cheek way.” The series would be produced by Kenneth Johnson, responsible for The Incredible Hulk and The Bionic Woman, and his involvement gave NBC hope it would succeed in providing a strong audience flow into its movie block from 9-11PM [4]. The series, produced by Universal Television, would premiere on February 27th.

Three Shows In One

Cliffhangers was the umbrella title for three separate, serialized shows. There would be no connection between the three. Each episode of the series would feature three 20-minute episodes (or “chapters”), one from each of the shows. And each chapter would start with a recap of the previous chapter and end with a shocking cliffhanger.

The three shows making up Cliffhangers were:

Stop Susan Williams – Often compared to the seminal 1914 silent The Perils of Pauline film serial, which didn’t feature cliffhangers (or more likely its 1933 remake, which did), Susan Anton would star as Susan Williams, a newspaper photographer investigating the death of her brother and the international conspiracy he in turn was looking into. Traveling the globe, Susan faced danger at every turn.

The Secret Empire – Set in the 1880 and inspired by the 1935 Gene Autry film serial The Phantom Empire, Geoffrey Rush would star as U.S. Marshal Jim Donner who, while investigating a mysterious band of phantom riders, stumbles upon an alien city deep beneath the Earth. Scenes in the subterranean city would be broadcast in color while the above ground scenes featured a sepia tone.

The Curse of Dracula – A contemporary take on the old Dracula tale, Michael Nouri starred as the infamous vampire, who was living on the West Coast and working as a college professor. But he’s pursued by a woman convinced he killed her mother.

Susan Anton explained that “the series is structured to last only 10 weeks. […] That’s the beauty of the series. After that, if we’re a hit, we can be brought back for another go-round. Or they can bring in other 10-week episodes” [5]. Cliffhangers was an expensive series to produce, reportedly costing $1 million per episode [6]. But if the concept worked, poorly performing serials would be completed in only ten to twelve weeks and could be swapped out for fresh ones, while successful ones would start over with new stories. The constant turnover would hopefully ensuring new viewers tuning in every few months to check out new serials. 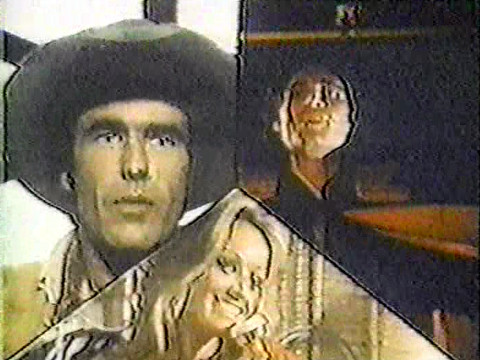 Cliffhangers: Stop Susan Williams, The Secret Empire and The Curse of Dracula

To add even more novelty to the series, the premiere episode would kick off with the serials already in progress: Stop Susan Williams would begin with Chapter 2; The Secret Empire with Chapter 3; and The Curse of Dracula farthest into its story with Chapter 4. However, the initial chapters were intentionally designed to introduce the characters and settings to viewers. Nothing would be missed from having not seen the non-existent earlier chapters.

According to a January 8th, 1979 article in Broadcasting, most ad agencies were of the opinion Cliffhangers would fail, in part because the concept could “make it difficult to sustain character interest in the show.” Although its CBS competition, The Paper Chase, would be weak, the ad agencies felt it likely ABC might do even better from 8-9PM with Happy Days and Laverne and Shirley when facing Cliffhangers [7].

Previewing the mid-season entries for Knight-Ridder Newspapers in early February, Lee Winfrey argued “NBC is down so low in the ratings, running dead last, that many people seem to have practically forgotten where it is on thee dial. So among its squad of nine new series, probably only two will still be standing next fall. Both seem distinctive enough to lure an audience despite NBC’s poor competitive position.” The two shows were Cliffhangers and Supertrain [8].

In his review of the series for the St. Petersburg Times, Robert Bowden predicted it “is either going to be a very big show or it will disappear faster than a buzz saw can peril Pauline.” He called the series camp and, unable to take any of it seriously, pointed out plot points and scenes that he found hilarious, noting “the comedy is replete from concept to execution. I laughed harder at Cliffhangers than I do at Happy Days or Laverne and Shirley. I rather liked Cliffhangers. I’m a bit weary of the formula situation comedies now on the air and welcome this experimental deviation from the standard” [9].

Of the premiere, Jerry Beck of The Associated Press wrote “the stories are farfetched, the cliches hoary, the villains sinister, and the perils seemingly deadly” [10]. Lee Winfrey, who prior to its premiere had suggested the series was one of two NBC mid-season replacements that might stick around, called the premiere “high camp, true to the spirit of the old serials, but glossier because much more money has been spent to make them” [11].

Critic William A. Henry III of The Boston Globe, in a lengthy essay, called Cliffhangers “much more daring and imaginative than the premieres on the other networks” but like all of NBC’s mid-season shows “aimed more at adolescents than adults and at reflexive more than thinking people” [12]. He continued:

The performances are plodding and add nothing except faces to the hysteria of the camera. There’s no evident attempt–certainly no success–at shading the primary-color cartooning of the characters as written. There’s no emotional involvement beyond the heaving of Susan Anton’s bosom, the gee-whiz of a city in the center of the earth, the perennial shock value of Dracula. Novelty of situation is not enough to draw an audience back for more. Only human interest can do that. [13]

To Henry, that Cliffhangers and NBC’s other new mid-season fare might draw viewers did not mean the shows were of high quality, but rather “an audience that says it is bored and jaded with lookalike sitcoms” might appreciate the freshness NBC was offering [14].

A particularly nasty review came from Fred L. Smith, who referred to Cliffhangers as “the worst program on the air and it may even be the worst program of all time.” He called it “the first series I’ve ever seen that seems to have absolutely no virtues. It’s just garbage through and through. The scripting borders on the infantile, the plots are totally contrived and I’ve seen better character development on ‘The Little Rascals'” [15].

John J. O’Connor of The New York Times was likewise negative in a March 11th article reviewing the mid-season shows that had premiered thus far. He called Cliffhangers moronic and boring and in response to a press release noting the series was inspired by old movie serials, suggested “NBC seems to forget that those serials were only fillers between the main features. At this stage, the network should concentrate on is features” [16].

The February 27th, 1979 premiere of Cliffhangers drew a 22% share of the audience for NBC, which Broadcasting called disappointing [17]. It was up against new episodes of Happy Days and Laverne & Shirley on ABC and the first half of made-for-TV movie The Women of West Point on CBS. For the week, Cliffhangers ranked 53rd out of 63 programs. Happy Days ranked 3rd, Laverne & Shirley was 2nd and the CBS telefilm 43rd [18].

The series was off to a poor start and remained near the bottom of the Nielsen chart as the weeks wore on. ABC’s line-up was just too strong. Even on March 13th, when CBS aired a news special that drew a measly 12% share of the audience, Cliffhangers could still do no better than a 22% share. That night, Happy Days averaged a 51% share and Laverne & Shirley drew 53% of the audience [19]. NBC’s plan to go after the same audience as ABC, based on the assumption that its hit shows were aging, wasn’t working.

The series actually fared worse opposite repeats ABC’s sitcoms. The April 17th episode, for example, drew just 17% of the audience despite facing reruns on ABC and CBS [20]. That week, Cliffhangers ranked 64th of out 67 programs [21].

No Cliffhanger About Cancellation

NBC announced its 1979-1980 schedule on May 1st and Cliffhangers was not on it. The series had been cancelled [22]. That same day the 10th episode of Cliffhangers, which wrapped up The Curse of Dracula serial, was broadcast. Although an 11th episode had been produced, it was never aired. It would have included the final chapter of Stop Susan Williams and the final two chapters of The Secret Empire. Although unseen in the United States, this episode was aired overseas.

Following the cancellation of Cliffhangers, two of the serials were edited into made-for-TV movies: Stop Susan Williams became The Girl Who Saved the World while The Curse of Dracula was turned into The World of Dracula.