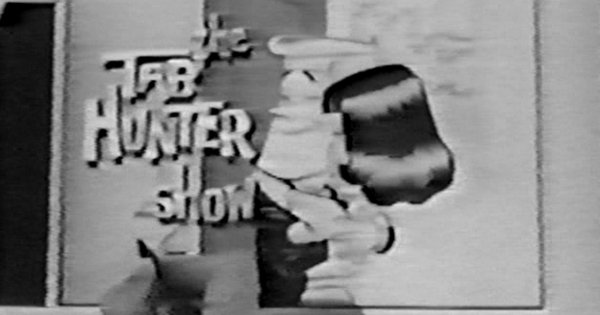 Tab Hunter starred in this sitcom that ran on NBC during the 1960-1961 season. He played an artist who based his popular comic strip on his own life as a carefree bachelor. The network hoped to alter its Sunday lineup but the experiment failed and The Tab Hunter Show ended after 32 episodes.

On March 2nd, 1960, The New York Times announced that actor Tab Hunter would star in a half-hour sitcom called Bachelor-at-Large, to premiere that fall as part of NBC’s 1960-1961 season [1]. Norman Tokar would produce and direct. Broadcasting reported in its April 18th issue that the series had been given the Sunday 8:30-9PM time slot and would be sponsored by Lorillard and Alberto-Culver [2]. At some point that month, the title of the series was changed to The Tab Hunter Show. An April 19th article The New York Times used that title and revealed that Richard Erdman and Jerome Cowan would co-star [3].

Hunter was best known at the time for his film roles, having starred as Joe Hardy in Damn Yankees in 1958 and in earlier movies like Island of Desire (1952) and Battle Cry (1955). During the mid-to-late 1950s he made a handful of guest appearances on television shows like The Ford Television Theatre and Climax! as well as the very first episode of Playhouse 90 in October 1956 (he would later appear in a second episode in February 1958). But The Tab Hunter Show would be his first regular series role and his first attempt at comedy.

Why the move to television? According to Hunter, television was where he could actually get a chance to act. In June 1960, he told Joe Hyams of the Herald Tribune News Service that “to a motion picture studio you’re just a commodity. They have gardens of such and so there and great looking tomatoes there, and so forth. But you have no identity as a person. Television gave me an opportunity to act. I worked hard, not asking audiences to like my work. All I want is for them to say, ‘By Heavens, the kid’s improved.’ If they keep watching long enough, and I keep improving, I may make it” [4].

As for The Tab Hunter Show, he suggested “it has a lot of appeal for the whole family. It has a little laughter and a smile. We figure people have problems at home and in business, and we want to give them something that will allow them to take their minds of of their problems” [5].

Adding The Tab Hunter Show, with its family appeal, to its Sunday line-up was part of NBC’s attempt to reshape the night. For most of the 1950s, the 8-9PM time slot had been dedicated to live comedy or variety, first with The Colgate Comedy Hour from September 1950 to December 1955 and then The Steve Allen Show starting in September 1956. In February 1959, the network decided to shift start of The Steve Allen Show to 7:30PM, beginning with the March 15th broadcast.

This gave The Steve Allen Show a half-hour lead on The Ed Sullivan Show on CBS and brought it in line with the start of ABC’s Maverick [6]. Not only would the change hopefully boost ratings for The Steve Allen Show, it would also give NBC a stronger showing in the 7:30-8PM half-hour. The 8:30-9PM half-hour was filled with Pete Kelly’s Blues. During the 1959-1960 season, NBC aired an anthology series called Sunday Showcase from 8-9PM on Sundays.

In the words of The New York Times, the 8-9PM Sunday time slot on NBC had long been “devoted to high-budgeted shows of music, comedy and variety that were designed to dazzle the viewer” [7]. For the 1960-1961 season, however, the network was planning to go in a very different direction and would fill the hour with a pair of filmed comedies, National Velvet and The Tab Hunter Show.

The two shows would be part of the network’s four hours of family friendly programming, an initiative aimed at critics who felt television had too many violent action/adventure shows. Jim Stabile, vice president of NBC’s standards and practices department, noted that “no network has ever pulled away all the action-adventure shows from a single night. We expect to get a large family audience and good ratings” [8].

In mid-August, Cynthia Lowry of The Associated Press noted that a number of new shows for the fall were “strongly reminiscent” of earlier shows, including The Tab Hunter Show, which sounded very much like The Bob Cummings Show only with the main character a cartoonist rather than a photographer [9]. Reviewing the series premiere in September, Lowry was even harsher: “the pattern of the first show is embarrassingly reminiscent of the old “Bob Cummings Show” except that the gay blade is a cartoonist and his comical side kick is a playboy millionaire. You can imagine the complications these two are going to have with pretty girls each week. You can, in fact, almost write the scripts yourselves” [10].

The Hartford Courant‘s John Crosby made the same comparison after seeing the premiere. He argued that the girls on The Tab Hunter Show “are more stunning” than the girls on The Bob Cummings Show and that Bob Cummings was funny and Tab Hunter wasn’t [11]. Fred Danzig of United Press International made a different comparison, calling The Tab Hunter Show the reverse of The Many Loves of Dobie Gillis in that Dobie Gillis had trouble getting dates while Paul Morgan has trouble getting rid of them [12]. Of the premiere, Danzig wrote “the plot and dialogue in the opener betrayed lots of rust” [13].

The Boston Globe‘s Percy Shain gave the premiere two stars (out of four), suggesting “if you can identify yourself with Tab you may have a perfectly wonder time” [14]. The show, he wrote, “will have to sell itself on Tab Hunter’s charms and ability to overcome the similarity of the plots. I imagine he’ll do beter [sic] with the young ones than with the more mature watchers” [15].

One somewhat positive review came from Jack Gould, whose review of the premiere for The New York Times stated it “utilized far-fetched situations, but there was a flashy brittleness to the show that perhaps will catch on with younger teenagers [16]. Steven H. Scheuer, reviewing the season as a whole in early November, stated that The Tab Hunter Show “started off pleasantly enough but has deteriorated into a series of cliches about the bachelor with the roving eye” [17].

In the series, Hunter played cartoonist Paul Morgan, creator of a wildly popular daily comic strip called “Bachelor-at-Large” which chronicled the adventures of a young bachelor living in sunny Malibu surrounded by beautiful women. The comic strip was based on Paul’s life: he was a bachelor, he lived in sunny Malibu and was often surrounded by beautiful women.

Richard Erdman co-starred as Paul’s millionaire best friend, Peter Fairfield III, also a bachelor who in addition to beautiful women also loved fast cars. Whatever trouble the two managed to get themselves into — and out of — would find its way into “Bachelor-at-Large.”

(Seven years before they appeared together in The Tab Hunter Show, Tab Hunter and Richard Erdman co-starred in the 1953 film The Steel Lady, about a group of oilmen who find a tank in the desert, repair it, and soon find themselves fighting for their lives.)

Paul’s boss, John Larsen (played by Jerome Cowan), is constantly hounding Paul to get his strips completed and sent in on time. Although often exasperated by Paul’s antics, “Bachelor-at-Large” is popular with readers and makes money. So he puts up with Paul. Likewise, Paul’s housekeeper (played by Reta Shaw) doesn’t approve of his lifestyle but sticks with him. 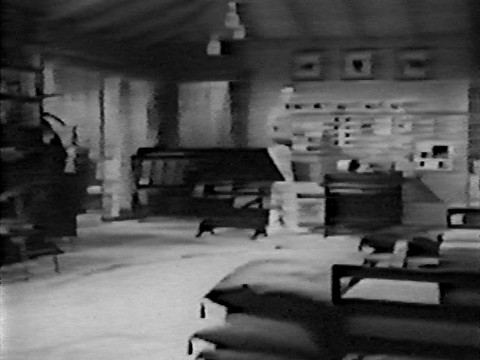 Each week, Paul had a new girl (or girls) in his life. Either he was in pursuit or was himself being pursued. It didn’t matter where he was — California, London, Paris, Spain — or what he was doing. There was always a beautiful girl and there was always some sort of complication. He sometimes moved from girl to the next within the same episode.

Many episodes involved Paul trying to get out of relationships because they were becoming serious. In the series premiere, for example. Paul tries to extricate himself from relationships with two different women, one who loves to cook (played by Mary Murphy) and one who loves to fix things, including cars (played by Liliane Montevecchi). In one episode, a young woman from a wealthy family has laid a trap to get Paul to marry her and he has to use all his wiles to escape. In another, while Paul and Peter are on a cruise a woman threatens to jump overboard unless one of them agrees to marry her.

John’s attempts to keep Paul on task and at the drawing board made up several other episodes. In one, John hopes to bring out Paul’s competitive streak by hiring another cartoonist, a woman. In another, Paul has to deal with an overeager assistant. Another recurring plot was Paul getting in over his head. In one episode, he offers to train a horse to impress a lovely British woman. In another, in an attempt to impress Peter’s new girlfriend, Paul decides to show off his ice skating skills.

Other episodes: a struggling actress fakes a suicide attempt to drum up publicity and Paul thinks he’s rescued her; Paul loves a challenge and a very rich but very cold and distance woman is right up his alley; Paul convinces a beautiful Swede to pose as a mermaid in order to distract Peter and John; Paul falls for an art student while vacationing in Paris and decides to extend his stay indefinitely; exhausted from his hectic social life, Paul retreats to a “health farm” where everyone is at least 60 years old, with one lovely exception; Paul is sued by a woman who insists that a character in “Bachelor-at-Large” is based on her.

On March 3rd, Larry Wolters reported that NBC planned to overhaul its Sunday line-up and would likely cancel The Tab Hunter Show, The Shirley Temple Show and National Velvet [20]. In May, as the networks were finalizing their 1961-1962 schedules, it was announced that The Tab Hunter Show and The Shirley Temple Show would be cancelled, as well as The Loretta Young Show and This Is Your Life [21].

NBC’s attempt to create a family viewing night on Sundays had failed. But there would be no going back to live comedy/variety in the 8-9PM hour. For the 1961-1962 season, NBC scheduled the second half-hour of Walt Disney’s Wonderful World of Color from 8-8:30PM and Car 54, Where Are You? from 8:30-9PM.

7 Replies to “The Tab Hunter Show”