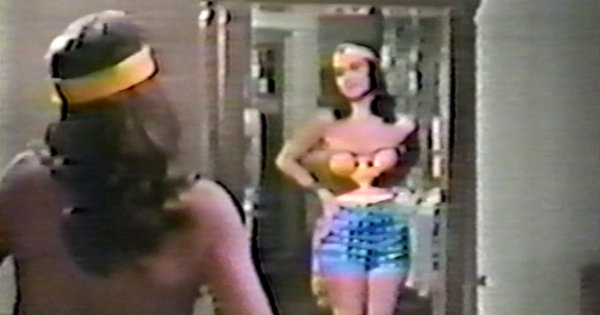 In 1967, William Dozier, the man responsible for bringing Batman and The Green Hornet to television, produced a short presentation film for a proposed Wonder Woman comedy featuring Ellie Wood Walker.

For one shining moment in the mid-1960s William Dozier was the king of television thanks to Batman, which burst onto the television scene in January 1966 and was immediately a smash hit for ABC. Dozier had worked in television during the early 1950s, producing Rod Brown of the Rocket Rangers for CBS from 1953 to 1954 and returned in 1965 to produce Rod Serling’s The Loner for the 1965-1966 season. He also produced a one-hour pilot based on Eric Ambler’s novel, Journey Into Fear [1]. The pilot, which starred Jeffrey Hunter, was considered by NBC as part of its 1966-1967 season, but a series never materialized. The Loner was canceled after only one season.

Undaunted, Dozier moved from drama to comedy and from NBC to ABC, leading to the debut of Batman in January 1966. The series was produced by his company, Greenway Productions, which soon landed two additional programs on ABC’s 1966-1967 schedule: The Tammy Grimes Show and The Green Hornet. In early July 1966, Broadcasting reported that Dozier was working on yet another show, a potential half-hour series based on Chester Gould’s Dick Tracy character. It would be a joint production between Greenway and 20th Century-Fox TV and would likely premiere either as a mid-season replacement in January 1967 or a full entry in the 1967-1968 season [2].

Broadcasting also noted that the two companies were looking at the character of Wonder Woman for a proposed series, although this one wouldn’t debut until the 1967-1968 season [3]. Like Batman, Wonder Woman was a comic book character who appeared in DC Comics (known previously as National Periodical Publications). The character was created by Dr. William Moulton Marston; her first appearance took place in December 1941. In August 1966, shortly before the start of the new fall season, The Chicago Tribune noted that “Wonder Woman is waiting in the wings” should The Green Hornet manage to recapture the early success of Batman [4].

Unfortunately, The Green Hornet wasn’t able to replicate the success of Batman and was canceled at the end of the 1966-1967 season. As for The Tammy Grimes Show, it was on the air for only four weeks before ABC pulled the plug. Thus, Batman was the only Greenway show still on the air at the end of the 1966-1967 season. Although a pilot for Dick Tracy was filmed in October 1966, it was not picked up.

A series based on Wonder Woman was indeed shopped to advertisers and/or the networks (likely ABC, at least) by Dozier prior to the start of the 1967-1968 season. Rather than producing a pilot episode, however, Dozier opted to film just a portion of a pilot script written by Stan Hart and Larry Siegel (both of whom wrote for MAD magazine and would later write for The Carol Burnett Show). According to Les Daniels, author of Wonder Woman: The Complete History, the 41-page script dealt with computer sabotage [5]. The filmed section included “additional gags” not found in the Hart/Siegel script (which was titled “Who’s Afraid of Diana Prince?”) [6]. 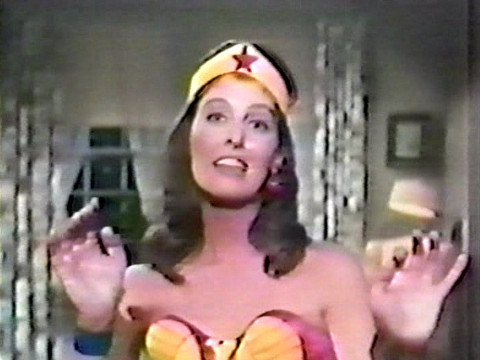 The presentation film (which could also be called a test pilot, test sequence or perhaps even simply a pilot excerpt) starred Ellie Wood Walker as Diana Prince, a timid young woman who lives with her mother. Walker was the only one credited in the presentation film, which has led to some confusion over the identity of the actress playing the mother. Although sources are split between actresses Maudie Prickett and Hope Summers in the role of the mother, it is clearly Maudie Prickett.

Unlike Batman, which was pure camp and featured absurd villains, Dozier’s proposed Wonder Woman series may have played more like a traditional sitcom. Perhaps it would have revolved around the day-to-day lives of Diana Prince and her mother, a worrying type who fusses over her awkward, seemingly helpless daughter, constantly wondering why she can’t just meet a nice man and settle down. That’s not to say the series wouldn’t have had campy elements.

In the presentation film, Diana Prince is sitting on a couch in her mother’s living room reading a newspaper, a storm raging outside. storm is raging outside. When she leans over to pick up some pages she falls right off the couch and calls out pitifully for her mother. Diana then decides that she has to go help Steve, a pilot whose plane is likely grounded due to the weather. Although not seen in the presentation film, the character of Steve Trevor was a love interest for Diana Prince/Wonder Woman in the comic book; Lyle Waggoner played him in the 1975-1979 Lynda Carter series.

Her mother doesn’t want her going out in the storm and would much rather see Diana stay safe at home eating dinner. While Diana hurriedly eats to appease her mother, she is berated for not having a husband and always flying around. She then stands up and puts on her bracelets, anxious to transform into Wonder Woman. Ellie Wood Walker enters the closet dressed as the homely Diana Prince and walks out wearing a Wonder Woman outfit: a pair of blue shorts with white stars, a red bustier with a gold eagle emblazoned across the front and a yellow headband with a red star. 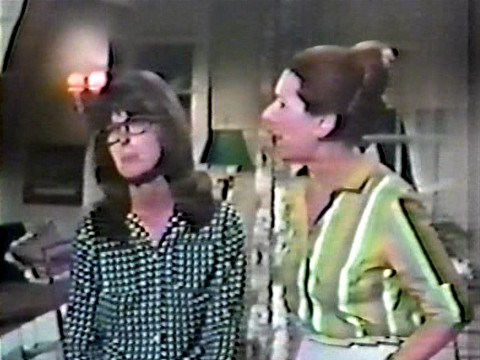 The narrator (none other than William Dozier himself) explains that Wonder Woman knows she has the strength of Hercules, the wisdom of Athena and the speed of Mercury but only thinks she has the beauty of Aphrodite. The the shorts worn by Ellie Wood Walker, however, are too baggy and the bustier too loose. Not that Diana notices. She spends a full minute admiring herself in the mirror but the reflection in the mirror is not Ellie Wood Walker but instead Linda Harrison, clad in a better fitting outfit. The concept of Wonder Woman in the presentation film is that of a superheroine who, along with super strength and super speed, counts super vanity as one of her powers.

Eventually, having spent enough time marveling at her beauty, Diana/Wonder Woman climbs out a window onto a ledge outside. After exclaiming that she has a job to do she twinkles her toes and flies off, complete with a silly sound effect. Her mother runs to the open window and yells after her daughter, begging her to call when she gets wherever she’s going.

An Analysis of the Presentation Film

Because the presentation film lasts only four minutes and forty-five seconds it is impossible to draw any real conclusions about how it would translate into a weekly television series. Certainly, the idea of Diana Prince thinking she is a beautiful woman when transformed into Wonder Woman is an odd one. Would each episode involve Diana preening in front of a mirror or a window, allowing Linda Harrison a few moments of screen time as the beautiful Wonder Woman that Diana believes herself to be? It is difficult to believe that William Dozier — or anyone, for that matter — actually felt the concept would work. 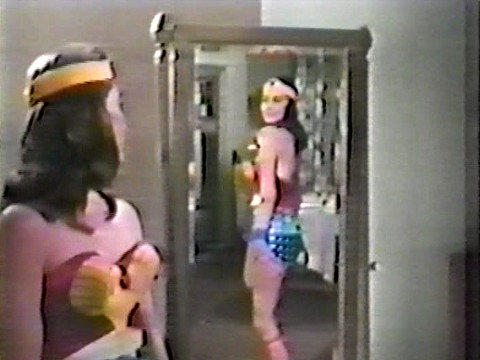 The presentation film appears awkward and unsure of itself; which, given that it was an excerpt from a full pilot script, is not unsurprising. Maybe the full pilot script made for a better introduction to Diana Prince and Wonder Woman than the short presentation film. Perhaps it showed how a weekly series could spoof or satire the Wonder Woman character. Its impossible to know whether Dozier would have had more success with Wonder Woman had he produced a full-fledged pilot. Keep in mind that he did produce a pilot for his proposed Dick Tracy series and it still failed to sell.

On Tuesday, March 12th, 1974, ABC broadcast Wonder Woman, a 90-minute telefilm starring Cathy Lee Crosby as the titular superheroine. It ranked fifth for the week [7]. On Friday, November 7th, 1975 ABC aired another 90-minute telefilm, this one starring Lynda Carter and called The New Original Wonder Woman. A pair of hour-long specials were broadcast in April of 1976 and in October the first of eleven additional specials to be aired during the 1976-1977 season was shown. The last of these specials aired in February of 1977.

For the 1977-1978 season, CBS picked up The New Adventures of Wonder Woman as a weekly series. It would return for the 1978-1979 season before being canceled. In all, one pilot telefilm, thirteen specials and 46 weekly episodes were aired between 1975 and 1979.

In 2011, NBC ordered a pilot for a potential new Wonder Woman series, with actress Adrianne Palicki in the title role. The network ultimately passed on the pilot.