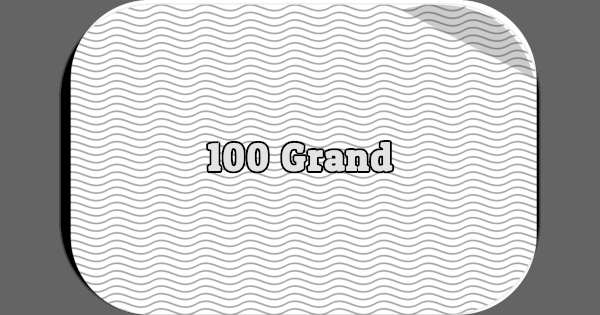 The first prime time quiz show since the quiz show scandals, ABC yanked 100 Grand off the air just three weeks after its September 1963 premiere due to low ratings.

The Return of the Quiz Show

Viewers may have assumed the TV networks were done with quiz shows after a number of scandals in the late 1950s forced shows like The $64,000 Challenge and Twenty One off the air. However, The New York Times reported in early April 1963 that ABC’s “tentative” 1963-1964 television schedule released the previous day included a quiz show called 100 Grand, in which the top prize would be (obviously) $100,000 [1].

The show was given the 10-10:30PM time slot on Sundays. The paper pointed out how the show “would be the first of its kind since the quiz show scandals in the late nineteen-fifties” and noted how the network insisted 100 Grand was “rig-proof.” Affiliates had been informed two days earlier at a meeting in Chicago [2].

According to Thomas W. Moore, ABC Vice President, “an advertiser has an option to buy the program and we will know the answer this week. If the advertiser picks up the option, then the show is definite. And if this advertiser does not buy, we will seek another” [3]. The name of the potential advertiser, as well as any information about the format of 100 Grand, was kept secret by both the network and General Artists Corporation, the company that represented the show’s producer Bob Stivers [4].

Four days later, on April 5th, The New York Times reported that 100 Grand would offer cities the opportunity to field “a representative who would pit his knowledge against that of a professional expert in some particular field,” with any winnings being given to the city, which in turn would “allocate the prize to a public project” [5]. On May 5th, Val Adams reprinted portions of an announcement from Daniel Melnick, ABC Vice President in Charge of Night-Time Programming pertaining to 100 Grand, now scheduled to premiere on September 15th:

The program’s format was specifically designed to incorporate built-in safeguards that guarantee the integrity of the contest.

The format of ‘100 Grand’ will be announced at a press conference before premiere date, at which time the program’s built-in security precautions, which are an intrinsic part of its format, will also be outlined.

The A.B.C.-TV program department examined many quiz programs over the past three years before deciding on ‘100 Grand’ as the one that met its requirements for audience appeal, drama and format-imposed integrity.

We believe we have developed a format, tested and refined through a series of run-throughs, to insure the complete integrity of ‘100 Grand.’ [6]

ABC finally revealed the rules to 100 Grand in mid-July in a 1,400-word statement.

In response, Val Adams suggested that once the show premiered, “the network may have to spend the first several weeks explaining the procedure to its viewers” [7]. In order to win the $100,000 prize, an “amateur expert” must face off with a “professional authority” over the course of five weeks. Each player comes up with his own questions for the other to answer.

If the amateur beats the professional for those five weeks, the viewing public then submits its own questions, five of which are chosen by a computer for the amateur to answer. Should he answer all five correctly, he gets the $100,000 [8].

In mid-August, veteran game show personality Jack Clark was announced as the host of 100 Grand [9]. On September 1st, John P. Shanley lamented the return of the quiz show, worried that should 100 Grand succeed, “we might be in for a new wave of quiz telecasts. It’s a depressing thought, but it could happen in the amazing world of television” [10].

(Articles in The New York Time gave the last names of the contestants as Neill or Neil and Kushin or Kushing.)

In a review published the next day, Jack Gould predicted the show would become a major hit. He also included a brief overview of the format:

The key to “100 Grand” is more sophisticated methodology. The program pits an amateur expert–last night’s subjects were the old standbys of the Civil War and opera–against a professional expert. Each asks questions of the other and can win points two ways–by stumping the opponent or successfully handling his questions.

With such a procedure it is to the advantage of contestants to keep their questions to themselves, and each sets of inquiries is checked for accuracy by different review boards. [11]

Gould felt the format of “instant recall” was more important than the personalities, but wondered if the network might need to find smarter professionals [12].

The third episode of 100 Grand aired September 29th. ABC cancelled the show days later. Executive producer Robert Stivers told The New York Times “the public looked, they weren’t interested, and they voted no. I think the only viewers we had last Sunday were relatives of Freddy Kushin. The network did what was right by canceling the show. I don’t disagree with them [13].

Neill and Kushin were the only contestants to appear on the show. Both were beaten by professionals during the September 29th broadcast. Because the professionals hailed from Miami, Florida and Vicksburg, Mississippi, the two cities each received $10,000 [14]. Kushin and Neill walked away with $1,000 savings bonds. 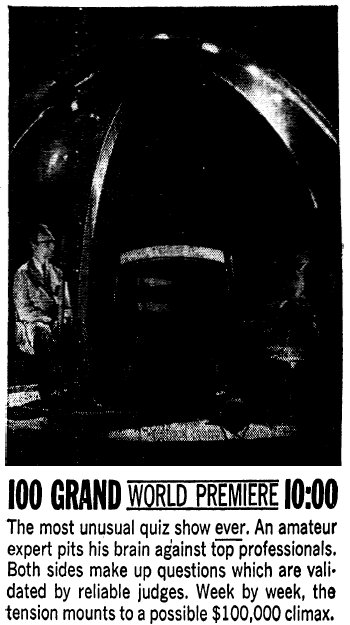 With Kushin and Neill off the show, Val Adams pointed out, 100 Grand was faced with the prospect of introducing a new set of amateur contestants [15]. Would the show have been more successful had the two continued winning?

The whereabouts of the three aired episodes of 100 Grand is a mystery. None of the major television museums/archives in the country (The Paley Center for Media, The Library of Congress, The Museum of Broadcast Communications, and the UCLA Film & Television Archive) have episodes in their collections. However, Archival Television Audio a complete audio recording of the debut episode as well as an excerpt from the third.

The 1963 ABC fall preview for the show did not include any actual footage from the show.

Another mystery: were additional episodes of 100 Grand filmed prior to the show’s cancellation?