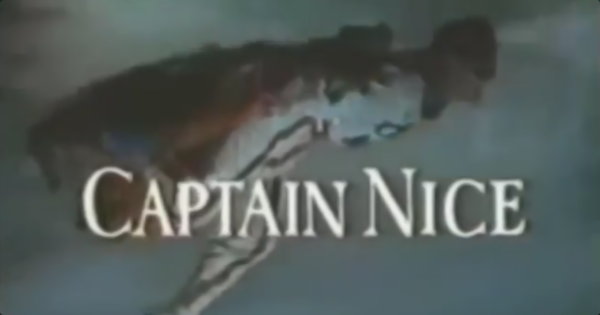 NBC hoped this campy sitcom about a mild-mannered chemist who turns into a bumbling superhero after swallowing a special serum could recreate the success of ABC’s Batman. It ran for 15 episodes during the 1966-1967 season.

William Daniels starred in Captain Nice as Carter Nash, a meek chemist working for the police in Big Town USA. Carter still lived with his parents and was dominated by his mother (played by Alice Ghostley). After he stumbled upon a serum that gave him all manner of super-powered abilities, Carter became the equally meek Captain Nice.

Clad in an outfit sewn by his mother, Captain Nice bravely fought the forces of evil and defended Big Town. Ann Prentiss played Sgt. Candy Kane, Carter’s love interest and Byron Foulger appeared as his father. Liam Dunn played the Mayor of Big Town (who was also Carter’s uncle) and William Zuckert played Chief of Police Segal. Episodes of the series saw Captain Nice battling counterfeiters, a deadly caterpillar, mobsters and a charge of public drunkenness, not to mention his fear of flying and his mother’s domineering.

Broadcasting reported in September 1966 that Captain Nice was one of three sitcoms, along with Sheriff Who? and Dick Tracy, NBC was preparing as potential mid-season replacements [1]. It was created and executive produced by Buck Henry, better known for creating Get Smart. According to the October 24th issue of Broadcasting, Proctor & Gamble was considering using the show as a replacement for Hey, Landlord [2]. On November 14th, it was reported that NBC had decided to use Captain Nice as a substitute for The Roger Miller Show instead [3].

Captain Nice was given the 8:30-9PM time slot opposite The Lucy Show on CBS and Rat Patrol on ABC. The series premiere drew a 17.9/29 Arbitron rating and a 14.2/24.8 Trendex rating, placing it second behind Rat Patrol according to both companies [4]. According to Broadcasting, “agency buyers” thought the show was in a “workhorse time period” and its performance was said to reflect “audience interest” [5].

Critics, tasked with reviewing two similar programs with similar themes, plots and characters, did a lot of comparing and contrasting. Percy Shain of the Boston Globe wrote that “Nice was nicer than Terrific–but not by much” while Bettelou Peterson of the Detroit Free Press opined that “Terrific is Terrible. Nice is Nicer” [6]. The Los Angeles Herald-Examiner‘s Bob Hull wrote that the shows were “both embarrassing likenesses in theme, costume and gag” while Harriet Van Horne of the New York World Journal Tribune called them “sick, depraved comic book fantasies.”

There were also some positive reviews, however. Bernie Harrison of the Washington Evening Star called it a “smartly written” show that “moves briskly and ingeniously” [7]. The Tulsa Daily World‘s Chuck Wheat noted that “it has definite swank style” [8]. And George Gent of The New York Times suggested that it “at least gave some evidence of a sense of style” [9]. But Harry Harris of the Washington Evening Star wrote that it had “little to commend” and Kay Gardella of the New York Daily News said simply that it “bombs” [10].

Within a month of its premiere, Captain Nice was already in trouble. Broadcasting revealed on February 20th, 1967 that it was probably not going to be renewed [11]. On February 28th, George Gent reported in The New York Times that Captain Nice was one of eleven shows that had been cancelled [12]. The final new episode aired on May 1st; repeats would be shown through August.

For a show that only ran for 15 episodes, Captain Nice produced an astounding amount of memorabilia. A tie-in novel from Tempo, a comic book from Gold Key and an unreleased set of trading cards from Topps. A complete test set was sold by Mastro Auctions for $14,052 in August 2006. It may be the only complete set in existence. At least three other partial set also exists according to the Professional Sports Authenticator website. Individual proof cards were sold on eBay directly from the Topps Vault and many went for more than $150 apiece. An uncut card sheet sold for $7,878 while a sample wax pack wrapper sold for $1,603.