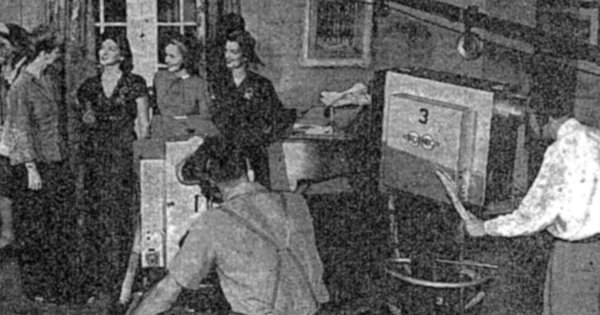 One of the earliest commercial TV shows series in the United States, WNBT aired just three episodes of Fashion Discoveries in Television before the sponsor pulled the plug.

Commercial television was officially introduced in the United States on Tuesday, July 1st, 1941. At the time, only one station in the country ready to accommodate commercials: NBC’s WNBT in New York City. Over the next few months, WNBT signed a number of sponsors, both for one-off specials and weekly series. One of those early series was called Fashion Discoveries in Television, produced by advertising agency Norman D. Waters & Associates.

Broadcasting announced the series in its August 4th, 1941 issue. The contract called for 13 half-hour weekly episodes to be aired on Thursdays from 5-5:30PM. The series was intended to “show the products of various Waters clients. Special tags will identify at point of sale all merchandise featured on the program and blow-ups and display cards will be furnished to participating manufacturers for distribution to their retail outlets” [1].

Later that month, Broadcasting reported that Fashion Discoveries in Television would debut on Thursday, September 4th under joint sponsorship by department stores Bloomingdale’s and Abraham & Strauss [2]. The debut was at some point pushed back to September 18th and an advertisement in that day’s The New York Times touted the world premiere of the series:

Today between five and five-thirty o’clock over Station WNBT the first sponsored television fashion show will be presented. Not just a model parade but a cleverly devised playlet that makes fashions live. Beautiful manikins, that talk and sing, an announce who is a well-known authority on women’s styles. See it over your own television set or in either store. Watch for it every Thursday at the same time. And we’d like to have you let us know how you like it. [3]

The premiere episode was titled “Five O’Clock Party” and took place at the birthday party for Wynn Price, who also modeled at least one dress. The episode opened with an introduction from producer Norman D. Waters. “Television will exert a greater influence on fashion than any factor yet known,” he declared [4].

Entertainment was provided by the Four Singing Harry Conover Models and a pair of Arthur Murray dancers, with commentary on the dresses, gowns and hats by Peggy Read. The New York Times concluded that while it was a shame television viewers could not see the color of the fashions on display, the broadcast overall was a success:

Enough time was also afforded for the spectator to absorb the costume as aw whole, or particular details of it, because of the manikins action of the plot. This was in contrast to teh customary manikins-on-parade show, where the commentator is describing an ensemble as the model whisks back into the dressing room after a hasty lope down the aisle.

As the draped skirt of a silk jersey number was mentioned, the camera gave only a close-up of the skirt, eliminating extraneous elegance from the eye and allowing the audience to concentrate on the detail being described at the moment. [5]

“Departing from the usual style show manner,” Broadcasting noted in its September 22nd issue, “the telecast was a dramatic comedy, whose plot gave an opportunity for girls to pose in new dress” [6]. 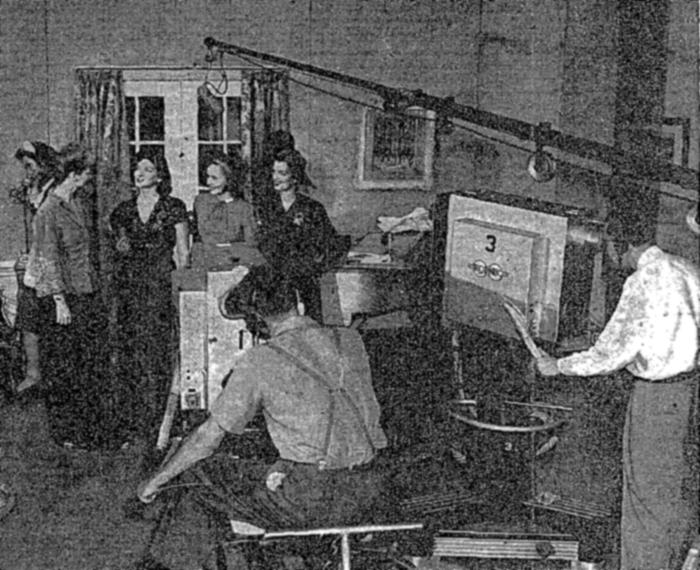 Behind the Scenes of Fashion Discoveries in Television
Copyright © New York Times, 1941 [1]

At the end of the third telecast, Norman D. Waters addressed the audience, explaining that the series would not be continuing as planned for another ten weeks. In a lengthy article in the October 27th issue of Broadcasting, he discussed the decision to halt the series, stating “we are convinced that our basic formula is right, judging by the enthusiasm these programs engendered, but we must stop for a breathing spell so we can have time to recapitulate our experiences, before we continue our regular program series, which will come a little later on” [7].

It was not due to the technical limitations of television. He criticized those who stayed way from television due to the lack of color, the size of the sets or the number of sets in existence, declaring television “the greatest means of advertising that our industry has ever had at its disposal” [8].

Instead, Waters was concerned that there was much yet to done on the part of advertising agencies, “in the creation of ideas and development of technique” that would make the most effective use of television as a means of advertising. According to him, television offered advertisers three things: prestige, publicity and a big audience (an estimated 40,000 viewers in the New York metropolitan area). How best to reach and capture that audience was still a work in progress:

Television’s chief attractions, however, are its immediacy and its spontaneity, which gives the audience the feeling of being in on what is happening as it occurs, with no editing or alteration. For that reason I am convinced that television should strive for an informal attitude, and not cold, studied perfection.

To inject those qualities of immediacy and spontaneity into commercial programs in a natural way presents a challenge to the advertising profession. [9]

The series never returned to the air. A second series from Norman D. Waters & Associates, Men’s Wear Highlights of Television, announced in August 1941 with John David Inc. sponsoring, never materialized [10]. It would have premiered on Wednesday, September 24th on WNBT. Like Fashion Discoveries on Television, it was planned as a 13-week series. In November 1941, a second weekly series from Norman D. Waters did make it to the air, a four-episode contest called Search for Beauty, sponsored by Gold Mark Hosiery Co.

Fashion Discoveries in Television was broadcast live prior to the introduction of the kinescope, meaning there was no way to record the episodes.

5 Replies to “Fashion Discoveries in Television”