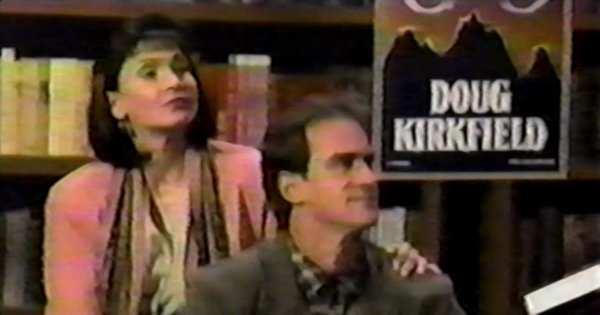 Christopher Meloni starred in this short-lived CBS sitcom from 1993 as a novelist who moves to a small town with his girlfriend and strikes up an unlikely friendship with his neighbors.

The Boys started life as one of more than a dozen sitcom pilots in development at CBS during the spring of CBS all hoping for a spot on the network’s 1993-1994 schedule. A co-production between CBS Entertainment Productions and Reeves Entertainment, the pilot was created by Dan O’Shannon, who served as executive producer alongside Terry Hughes [1]. Anthony Edwards, Jessica Lundy, and Ned Beatty starred in the pilot, with Edwards playing a writer who becomes friends with his older neighbors.

CBS decided not to pick up The Boys for fall but instead ordered a limited batch of six episodes to air during the summer [2]. According to David Poltrack, CBS senior vice president for planning and research, The Boys and other summer tryouts were part of a new development strategy for the network. Rather than holding shows that didn’t make the cut for fall until mid-season, CBS opted to give several of them short orders to see how they fared in the summer. One of the benefits of a summer tryout was extra promotional attention that might not be possible in the fall [3].

Summer tryouts would also teach viewers to expect new programming on CBS in certain time slots once the fall season got underway, explained Peter Tortorici, executive vice president of CBS Entertainment. The network was developing year-round programming to attract viewers outside the traditional season. “People have the wrong impression about August being the dog days because in terms of viewership, it’s not. Our theory is that the reason the fall season is an institution is because that’s where the audience is, and we are simply trying to respond with shows now because the audience is available now” [4].

If The Boys was a success during its initial six-episode run, it could potentially return at mid-season to replace a failed fall entry. But just getting the show on the air in the summer required some complicated maneuvering. The transition from pilot to series involved significant cast changes. Edwards and Lundy were replaced by Christopher Meloni and Isabella Hoffman [5]. However, Meloni and Hoffman were already attached to another sitcom pilot CBS was considering called American Dream, from producer Twentieth Television.

To get the two for The Boys, CBS Entertainment Productions partnered with Twentieth Television [6]. Ultimately, the sitcom was produced by the two companies in association with Hughes O’Shannon Productions. Reeves Entertainment was apparently not involved at all with the series, only the original pilot episode.

Meloni starred as Doug Kirkfield, author of a bestselling novel called Slopes. Hoffman played Molly Rich, Doug’s girlfriend, a piano teacher. As described by Doug, Slopes was about a big beast that terrorizes a ski resort. It spent 11 weeks at the top of the bestseller list and was being turned into a TV movie. He promised his fans another novel soon, going as far as to move with Molly from New York City to a small town in Washington State where he would have nothing to do but write. Instead, he found himself unable to write anything without the noise and commotion of the big city.

At first, Doug has a hard time dealing with Bert, Harlan, and Al. They insist on calling him Ed–the name of their friend who died six months ago and owned the house Doug and Molly bought–and expect him to do things the way Ed used to. Doug doesn’t like that. He soon learns that Ed actually died five years earlier but Bert, Harlan, and Al haven’t been able to get over it. The man he thought was Ed bought the real Ed’s house after he died and eventually just let everyone call him Ed.

Doug doesn’t go that far–he still wants to be called by his own name–but he realizes that there’s no harm in humoring his neighbors. He soon becomes one of the boys and grows to enjoy spending time with Bert, Harlan, and Al every week even if they are an eccentric bunch. That was the basic premise of the series, which didn’t necessarily try to find humor in the conflict between generations. Most of the jokes focused on Bert being stubborn–he still used a Betamax player, for example, because he had made his decision and was sticking with it. He also spent decades feuding with a neighbor who refused to take down his Christmas lights.

Bert was also occasionally unnerved by his younger neighbors. According to him, the unmarried Doug and Molly were shacking up together which meant they were hippies. He was scandalized when Molly wore a short sundress. He was furious when Doris decided to embrace feminism after a talk with Molly. Doris was far more accepting of Doug and Molly, although both found her a little too chatty at times.

The Boys premiered on Friday, August 20th at 9PM, followed by another new sitcom called The Building at 9:30PM. Reviews were mixed. Howard Rosenberg of The Los Angeles Times found the first episode a disappointment:

Except for one dart of wit when Doug is badgered into assuming the role of Ed, there is nothing here even to giggle about. “The Boys” seems to be striving in part for the kind of manic maleness displayed by Oscar and his card-playing cronies in “The Odd Couple,” but unfortunately these “boys,” especially Al and Harlan, are much less vividly colorful than merely grating. [7]

The Washington Post‘s Tom Shales was harsher, calling the series “an almost unbelievably flimsy contraption that lurches onto the air” while lamenting the way Ned Beatty and John Harkins were “wasted on irritating roles” [8]. Tony Scott’s review in Daily Variety focused mostly on what worked in the series premiere:

Best when it edges into dark humor — there’s a line about a kid and a burning building that’s bravely and wittily sour – “Boys” feeds on knowing the people and on surprise retorts. Writer Dan O’Shannon, never crowding his story, lets it unfold through sly exchanges and character development.

How well viewers will take to the quirks of the elders and to Doug’s reactions remains to be seen. Meloni offers a pleasantly understated presence, and Beatty, Venture and Harkins establish distinct personalities under Terry Hughes’ sharp direction. Roberts is splendid, and Hoffman, so far straight woman for the program, is fine. [9]

Walter Goodman, reviewing the series for The New York Times, was hopeful. “So far, the retirees are shtick figures, and the plotting is a touch obvious,” he wrote. “But the cast is amiable and the characters, whatever their age, are still young enough to develop. Maybe ‘The Boys’ will grow up into more solid personalities and less pat situations” [10].

The Boys premiered to a mediocre 6.6/13 Nielsen rating and 9.3 million viewers, ranking third in its time slot and 63rd for the week [11]. The Building performed better at 9:30PM; it was watched by 11.1 million viewers, averaged an 8.0/16 rating, and ranked 50th for the week [12]. As a result, CBS announced on August 23rd that it was switching the time periods for The Boys and The Building [13]. The flip-flop backfired. Although both shows dropped significantly on Friday, August 27th, The Boys actually rated better at 9:30PM than The Building at 9PM [14].

CBS stuck by The Boys for the next three weeks before pulling it off the air along with The Building following their Friday, September 17th broadcasts. The next week, CBS aired the made-for-TV reunion movie The Odd Couple: Together Again. The network aired five of the six produced episodes of the two sitcoms, leaving each with a single unaired episode. Neither show was repeated nor have they been syndicated.

The Library of Congress has copies of the five aired episodes of The Boys in its collection but not the unaired episode.

The Boys didn’t feature a traditional opening credits sequence. At the beginning of each episode, Scott Joplin’s “Bethena, A Concert Waltz” played over a simple title card followed by the name of the episode and the start of the first scene.

One Reply to “The Boys”