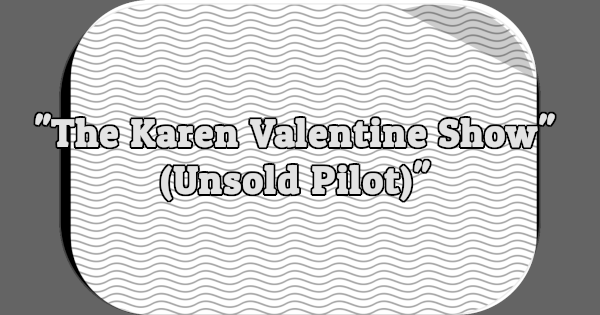 This unsold sitcom pilot was the first of three attempts by ABC and 20th Century-Fox to get a sitcom starring Karen Valentine on the air. Intended for the 1973-1974 season, ABC broadcast the pilot in May 1973.

Karen Valentine was just 22 when she was cast as student teacher Alice Johnson on ABC’s sitcom Room 222, which premiered in September 1969. The series did well enough in the ratings to warrant a second season renewal and then did even better at the 1970 Emmy Awards, racking up five nominations and three wins, including one for Valentine. She received another nomination the following year.

In its third season the series cracked the Top 30 for the first time, ranking 28th during the 1971-1972 season. It didn’t perform quite as well during the 1972-1973 season but ABC renewed it once more. The show’s fifth season would premiere in September 1973. And yet, the network also had under consideration for the 1973-1974 season a sitcom pilot starring Karen Valentine.

The pilot was called “The Karen Valentine Show” and was produced by 20th Century-Fox Television (the same production company responsible for Room 222). It was one of five pilots the company had in the works for the 1973-1974 season [1]. Had ABC picked up the pilot, Valentine would have had a choice to make: try to continue on Room 222 while also starring in her own sitcom or leave Room 222 in favor of her own series [2]

In addition to Valentine, the pilot had other connections to Room 222. It was co-written by Jerry Rannow and Greg Strangis, who also co-wrote several episodes of Room 222 together. And it was produced by William P. D’Angelo, who had served as a producer on Room 222 during the 1971-1972 season. Director Peter H. Hunt was not involved with Room 222 in any way.

Valentine’s character in “The Karen Valentine Show” was a soft-spoken young woman named Karen Scott who worked at a public relations firm. She was the assistant to wacky owner Buddy Lundon, played by Charles Nelson Reilly. Buddy and his firm took on clients nobody else would and it was Karen’s job to help make them all look good.

Clients seen in the pilot included a pair of comic strip writers who were incredibly dull in person; an inventor whose anti-war gun fired rubber doves; and a furniture manufacturer who had devised an inflatable bookcase. Had the pilot gone to series, other regulars would have included Henry Gibson, Kenneth Mars, Louis Zorich and Johnnie Collins III. Regis Philbin guest starred in the pilot, playing himself.

Although ABC didn’t pick up “The Karen Valentine Show” it did eventually air the pilot episode. On Monday, May 21st, 1973 the network aired a two-hour block of unsold pilots as part of The ABC Monday Night Movie under the title “Comedy Trio.” The pilots were “The Barbara Eden Show,” with Barbara Eden and Joe Flynn; “Catch 22” with Richard Dreyfuss; and “The Karen Valentine Show.”

Valentine would later explain what went wrong with “The Karen Valentine Show,” saying simply “they rushed it” [3]. With her pilot unsold, Valentine remained with Room 222 through the 1973-1974 season, which would be its last. ABC cancelled the series in November 1973 due to low ratings [4]. The last first-run episode aired in January 1974.

ABC and 20th Century-Fox tried again, producing another pilot built around Valentine for the 1974-1975 season called “The Karen Valentine Program.” It was not picked up and was never aired. Finally, in January 1975, ABC premiered a new sitcom starring Valentine called Karen, in which Valentine played a young woman working as a lobbyist in Washington, D.C. It ran for 13 episodes.

UCLA’s Film and Television Archive has a copy of “The Karen Valentine Show” in its collection.