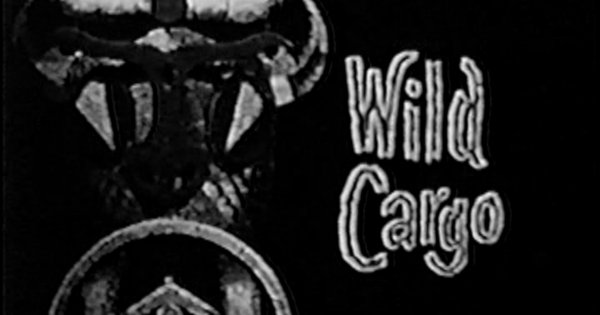 This syndicated documentary show featured films of wild animals, expeditions to Africa and South America, and other hunting trips by adventurer Arthur Jones.

As hard as it often is to dig up information on obscure network shows, it’s harder still to find out anything about many syndicated programs. Because they may not have aired in the entire country, there may not have been much media coverage, making it difficult to research them. I ran into this problem with a show called Wild Cargo. It isn’t listed in The Complete Directory to Prime Time Network and Cable TV Shows (at least not in the eighth edition) and its entry in Total Television is all of two lines:

According to Total Television, it was released in 1963. The same information is included in The Complete Encyclopedia of Television Programs, 1947-1976. That wasn’t much to work with. It turns out that Arthur Jones, the man who hosted Wild Cargo, later went on to invent the Nautilus line of exercise equipment in 1970. In the late 1950s, however, he was appearing on television shows like I Search for Adventure and Bold Journey, presenting films of his successful expeditions to Africa and South America.

For example, on June 6th, 1957, he was on I Search for Adventure (a syndicated documentary series; this particular episode was shown in Los Angeles) with a film that showed him “capturing giant African reptiles for shipment to the United States” [1]. On September 22nd, 1958, he appeared on ABC’s Bold Journey with film of “an expedition into the African Congo jungle to capture the great apes of the region” [2]. Another episode of I Search for Adventure, shown in Los Angeles on March 26th, 1959, he showed “how he captured 25 alligators and crocodiles by wrestling with them” [3].

Although Total Television and The Complete Encyclopedia of Television Programs, 1947-1979 indicated otherwise, Wild Cargo debuted in syndication in New York City on Wednesday, February 15th, 1961. It was broadcast by WPIX from 10:30-11PM. In its television listings, The New York Times simply wrote “Film series on big-game hunting” [4].

In the opening credits, a man named Mel Levitt (I’m not sure of the spelling) appears to be the host, not Arthur Jones. Episode descriptions in The New York Times included “Hunting cheetah and elephants with pistol in Africa,” “Hunting the beaded lizard and the boa in Mexico,” “Rattlesnake round-up” and “Hunting the javalina and the kinkajou in Mexico.” If the television listings in The New York Times are accurate, a total of 29 episodes were shown before the series went into repeats in August of 1961; a handful of additional new episodes may have been shown in June of 1962 before WPIX dropped the show.

In Chicago, Wild Cargo premiered on WGN on Tuesday, January 16th, 1962, airing from 8:30-9PM (local time). Television listings in The Chicago Tribune indicate there were a total of 34 episodes; repeats began in November of 1962 and continued through August of 1964. Episode descriptions in that paper were more in-depth. A choice selection:

Natives making rope for use in capturing elephants, setting up elephant traps, killing of tigers during the night, and an attempt to capture a man-killing leopard.

A native hunter uses an ancient muzzle loading musket to hunt his prey. Various scenes of antelope, zebra and giraffe.

An attempt to locate native game poachers is highlighted by a look at various methods of killing animals by the poachers.

Arthur Jones and Peter Hankin attempt to drive out and remove all types of animals serving as hosts to the deadly tsetse fly, a carrier of the sleeping sickness.

Wild Cargo also aired in Los Angeles, beginning Monday, May 28th, 1962 on KCOP. Several articles in The Chicago Tribune stated that the show was broadcast in color. The Paley Center for media has two episodes of Wild Cargo in its collection.