These two hour-long specials, originally broadcast in January 1979 by NBC, have become somewhat infamous among comic book fans. You see, they brought together a slew of DC Comics heroes and villains — including Adam West and Burt Ward as Batman and Robin — in an outrageously cheesy manner. To be honest, I’m not entirely sure what the actual names for these specials are. 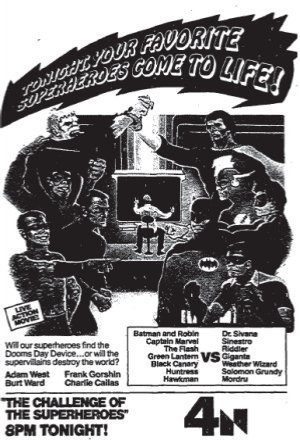 In “The Challenge,” an evil genius named Sivana has come up with a way to totally destroy Earth and he’s enlisted a whole slew of his fellow bad guys — including the Riddler, played by Frank Gorshin — to help (or watch or what have you) and only a a bunch of super heroes can stop him. Joining Batman and Robin in their battle against the forces of evil are Captain Marvel, The Flash, Green Lantern, Black Canary, Huntress and Hawkman.

Despite its popularity (perhaps notoriety is a better word) today, “The Challenge” was the second least-watched program on television during the week it was on the air. Technically, it tied for 58th out of 59 shows (NBC’s Weekend was last); a two-hour telefilm based on Marvel’s Captain America was 29th for CBS [1]. 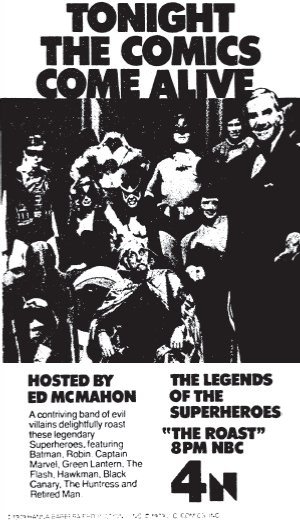 The second special, “The Roast,” was hosted by Ed McMahon and saw the villains from “The Challenge” come back to poke fun at the heroes. Once again, the special was at the bottom of the Nielsen chart, ranking 62nd out of 63 programs for the week (“CBS Report on Iron” was 63rd) [2]. Writing in Canada’s The Globe and Mail, Ray Conlogue had this to say about “The Roast:”

Considering that the stars are not exactly supernovas, the show had to stand or fall on its humor. Like the Colisseum, it fell more than it stood. Ruth Buzzi’s gunshot wedding to the superhero of her choice was a bit forced, not up to her usual standard; and Morton’s Solomon Grundy bashing everybody on the head at the mention of the word swamp wasn’t over-funny after the fifth bash. However, some routines had a glimmer of life to them. Pat Carroll as Hawkman’s Mother gave an interesting turn to the guilting mother routine […] Brad Sanders’ Ghetto Man was perhaps the best: You think Weather Wizard is super? I’ll tell you what’s super: getting through a Chicago winter without heat [3].

Although never officially released on VHS or DVD, copies of both “The Challenge” and “The Roast” have been circulating — and ridiculed — for decades.

11 Replies to “Legends of the Superheroes”