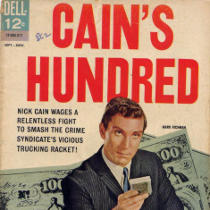 Cain’s Hundred ran for one season on NBC from 1961 to 1962. Mark Richman starred as Nick Cain, a former mob lawyer who decides he’s had enough of working for criminals. That doesn’t sit well with the mob and an attempt is made on his life. His fiancÃ©e is killed instead, leading Cain to vow to bring 100 of the worst mobsters to justice. A total of 30 episodes were produced. As was common practice in the 1960s, Dell published a pair of tie-in comics. The first was dated May-July 1962 and the second, which I review here, September-November.

Interestingly, the character of Nick Cain doesn’t make his first appearance until page 19 (out of 32 pages). The first half of the comic sets up the story. At a syndicate meeting, mob boss Barny Rogin decides that Jim Deren is found to be cooking his books, so he’s killed and replaced by a man named Tony Jasper. Jasper, who took off for Brazil eight years earlier, has had plastic surgery. He’s thrilled to be back in the action. His daughter, Cindy, doesn’t know a thing about his mob connections. They change their last name to James and settle down in Belford. 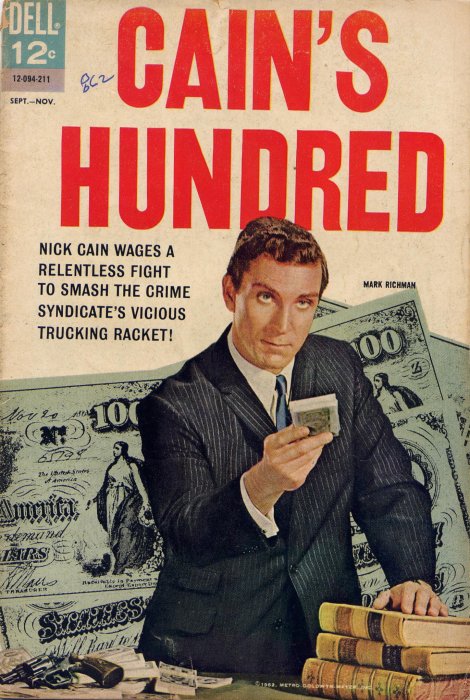 Before long, with the help of his associates Davis and Grillo, Tony gets down to business. They shake down two trucking companies, killing a few drivers and destroying a few trucks to force the owners to raise prices (and kick back the extra money to Tony). They then move on to dry cleaning. Unfortunately, one owner just won’t say yes, so he’s beaten up by a thug named Packer. The owner grabs a gun and confronts Packer in a bar. They both shoot and both die. Grillo, who was with Packer, gets away.

It’s at this point that Cain learns what has been going on in Bedford. He doesn’t like it. Along with Special Agent Devlin at his side, he investigates. They manage to convince the owner of one of the trucking companies to come clean; the man is killed shortly thereafter and Tony decides to lay low. Cindy, overhearing a conversation between her father and Grillo, assumes her father is being intimidated and decides to tell Cain. She is nearly killed by another mobster who wants to pin the death on Grillo. 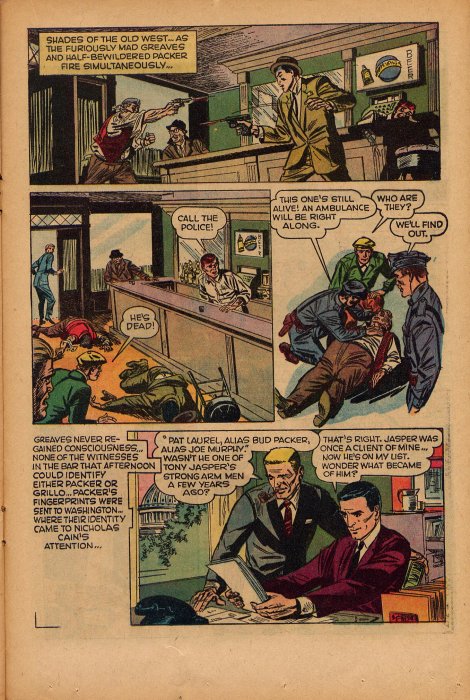 Instead, Cindy manages to make it to Cain. Tony, Grillo and the others are quickly surrounded by Cain and the police. A shoot-out ensues. Tony is hurt but survives and the protection racket is smashed. Another of Cain’s Hundred can be crossed off. But for Nick Cain, there will always be another goon to take down. Still, it always to “knock a syndicate wheel out of action.”

As is often the case, the artwork doesn’t do justice to Mark Richman, who has a very distinctive face. He’s almost recognizable in the comic, but really the character’s features are quite vague. I noticed a few mistakes in the comic. For example, at one point Cindy is out dancing and her hair changes from blond (yellow, really) to reddish-orange in on panel. In another panel, a dialogue bubble obviously intended for Cindy (“But, Daddy…”) instead points to Grillo. Grillo’s hair also changes from light orange to a much darker orange.

I decided not to show the back cover, which depicts possible prices for selling cards through the Junior Sales Club of America. The inner front and back covers each show a one-page, black and white story, “The Trucking Racket” and “Phony Charities,” in which real-life scams are depicted.

One Reply to “Bookshelf: Cain’s Hundred #2”