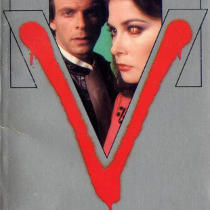 Two weeks ago I wrote about the various novel and comic book tie-ins based on NBC’s V: The Miniseries and its various spin-offs. Today I’ll be reviewing the first novel to be set after the events of V: The Final Battle, the second miniseries, which was Allen Wold’s The Pursuit of Diana. Although apparently the various authors writing these tie-in novels were given access to some of the early scripts for NBC’s weekly television series, the events in The Pursuit of Diana were entirely contradicted by the premiere of V: The Series (which aired on October 26th, 1984). Of course, the novel was finished long before the television series debuted and television scripts can change on a daily basis, so it’s not surprising that the stories didn’t mesh.

For the record, you’ll probably need some familiarity with V: The Miniseries and V: The Final Battle to really understand the following.

In the premiere of V: The Series, the fiendish Visitor commander Diana (played by Jane Badler) is quickly apprehended by resistance leader Mike Donovan (played by Marc Singer) after a brief skyfighter battle and the Visitor mothership soon returns to Earth. A year passes and the action starts up again. In The Pursuit of Diana, however, Diana escapes the Visitor mothership and heads for the Moon. On board, Mike, Julie Parrish (played by Faye Grant), fifth columnist Martin (played by Frank Ashmore) and others working with the resistance have to work quickly to repair the ship while dealing with Visitors still loyal to Diana. Back on Earth, Ham Tyler (played by Michael Ironside), Robert Maxwell (played by Michael Durrell) and others soon realize that despite the success of the Red Dust and the defeat of the Visitors, things aren’t going to go back to normal right away. 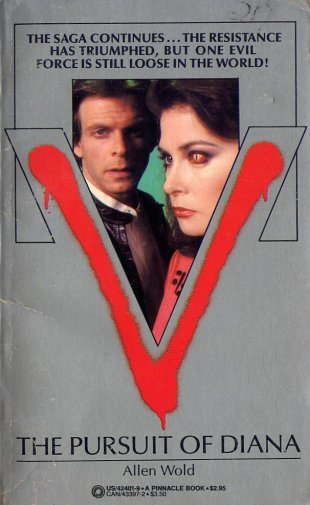 So right off the bat there are some big differences between the novel and the premiere of the television series, which largely took place a year after the events of V: The Final Battle. The events of the novel, on the other hand, unfolded over the course of a few days after the end of the second miniseries. There’s no mention of Nathan Bates or the Club Creole from the television series and Elizabeth Maxwell doesn’t suddenly transform into a teenager. Really, aside from the characters and the general setting, the novel and the series premiere couldn’t be more different.

The main storyline running through The Pursuit of Diana is that all the politicians and scientists and important people kidnapped by the Visitors had been brainwashed (or converted) and could easily be swayed by Diana, who despite being captured eventually escaped. So the Visitors could conceivably still take over the world. Worse, nobody believes the Resistance when they say the Visitors are all that bad. When Mike and Julie and the others eventually return to Earth they are actually arrested alongside Diana and other Visitors.

Although the resistance members are able to escape, Diana was already gone, spirited away by elements in the government and military willing to work with her. As for the resistance, even after they begin “unthawing” humans who had were to become Visitor food, people on Earth just aren’t being all that friendly. They’re considered rebels. As the novel comes to an end, it looks like Mike and Julie will have to trade the mothership for a doomsday device Diana had threatened to activate. Instead, thanks to a little venom spewed by Elizabeth, a fight breaks out and one faction of the military realizes that they’ve been siding with Diana.

V, The Pursuit of Diana Back Cover – Copyright Pinnacle Books

As The Pursuit of Diana ends, Diana has been captured once again. The mothership is still under control of the resistance and it seems as if Earth has finally been saved. Given that Pinnacle published another eight novels, the Visitors weren’t quite as finished as it seemed. I haven’t read any of the other Pinnacle novels in years but I know Lydia from the television series was eventually introduced and I assume Elizabeth was shown to have grown into a teenager. I also believe many of the novels involved characters not seen on the television series. But I can’t say whether the novels ever closely matched what was going on with the television series (at least not until I read more of them).

To be honest, as bad as V: The Series was at times (and I’m actually a big fan of the show), I found The Pursuit of Diana to be even worse. It did do a good job of showing the conflict between Visitors still loyal to Diana and those willing to work with the resistance and the fifth column. But once it introduced the idea of the governments of the world being in shambles due to conversion (however well that may have fit with the concept of conversion introduced in the two miniseries) I lost interest. Diana with mind control abilities? No thanks.

3 Replies to “Bookshelf: V – The Pursuit of Diana”