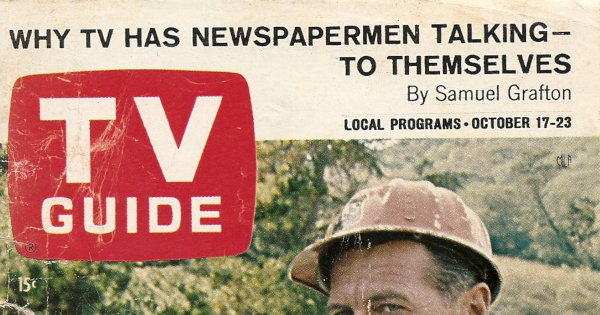 On the Cover: Lassie and Robert Bray from Lassie on CBS (photograph by Ivan Nagy).

It took five weeks but there’s finally a really interesting article about a television series in TV Guide. It’s the cover article (“You Can’t Teach An Old Family New Tricks”) by Richard Warren Lewis about big changes made to Lassie on CBS. Gone were the Martin family (played by Jon Provost, June Lockhart, and Hugh Reilly), who were shipped off to Australia. Lassie was now in the care of a forest ranger played by Robert Bray.

The long-running series, which premiered in September 1954, had already undergone one transition during the 1957-1958 season. According to the article, planning for the second overhaul started in March 1963 when producers decided that the show had become stale. Here’s how producer Bob Golden explained the situation:

After 10 seasons on television, we were in such a desperate state that we would by stories that we weren’t too enthusiastic about because we had to have then. Our shows were getting redundant. They lacked freshness. We got tired of that farmhouse. We’d had to set up more locales around it than could possible exist–rocks, farmland, mountains, rivers! The farm always had to be there. The element of suspense had diminished. Lassie always came back to the farm. Anybody in this business who thinks the same kind of successful thing can go on forever is making a mistake.

A five-episode experiment was devised in which Bray’s character cared for Lassie after she was separated from the Martins. Ratings soared, confirming to the producers that viewers were eager for a shakeup. Contract negotiations with Provost also factored into the decision to get rid of the Martins. So, over the course of the first three episodes of the show’s 11th season, broadcast during September 1964, the Martins said goodbye to Lassie and Bray’s character became her new owner. The series would remain on CBS through the 1970-1971 season before moving to first-run syndication for an additional two seasons. 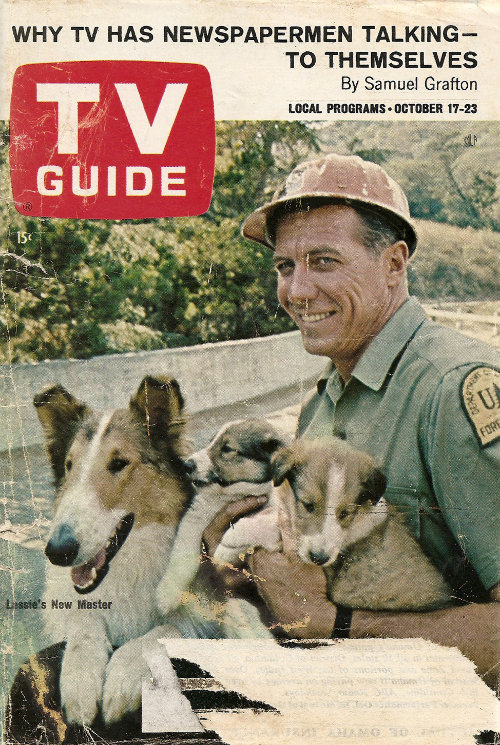 I haven’t read the book but the excerpt isn’t particularly interesting. It recounts a meeting between Miller, Cooper, a number of production people and CBS president James T. Aubrey but consists primarily of quotes from notes made by Miller and Cooper while on a research trip. In the pilot, which was produced by never aired, Cooper played a county agent. Unfortunately, this excerpt never explains what a county agent is. Maybe readers in 1964 would have known. I certainly didn’t.

“It’s Tough to Be 17 — Particularly When You’re 29” by John Maynard is a somewhat depressing article about 29-year-old actor Eddie Applegate who played 17-year-old Richard Harrison on The Patty Duke Show. The network’s publicity machine at first refused to allow Applegate to admit he was married and later suggested he lie about his age and his wife’s age to make it easier for the show’s young fans to accept. Applegate resented the fact that people assumed he was a teenager rather than a grown man acting as a teenager, which he thought was a pretty difficult thing to do.

In “The Rich Relatives Come to Town,” Samuel Grafton lays out the tensions between television reporters and newspapermen that had grown steadily throughout the early 1960s. Television, Grafton explained, both reported news, made news, and influenced news. It also forced newspapermen to the sidelines. If this article were written today, I suppose it would be about how bloggers and online news have pushed television to the sidelines.

Finally, there’s “Vroommm and Off You Go,” a short essay by actress Bek Nelson in which she discusses her career and love of motorcycles. Also in the national section is a picture feature spotlighting the November 10th, 1964 episode of The Man from U.N.C.L.E. in which a number of the show’s top production staff made cameo appearances.

There’s no “As We See It” in this issue but there is another review by Cleveland Amory in the listings section. This time he’s discussing The Rogues, NBC’s new drama series starring David Niven, Charles Boyer, and Gig Young. Amory is critical of the show’s attempt to mix humor with drama, arguing that the writer’s don’t seem to know how to balance the two. He also suggests that Boyer isn’t given enough to do but praises supporting cast member Robert Coote.

There are some interesting notes in the Hollywood and New York TV Teletype columns this week:

The letters page this week is the best yet. Here’s one from a reader not quite sold on color television:

I would happily renounce TV in six delicious colors for plain old-fashioned black-and-white TV like we used to have in the days of The Philco Playhouse. In those days the play was the thing, not the tint.
Albert French
New York, N.Y.

Three readers complained about That Was the Week That Was:

Watching That Was the Week That Was, the idea crept into my head that at he end of the show, when the credits were shown, I would see the name of LBJ’s campaign manager.
(Name withheld)
Stevenson, Ala.

I’ve had it with TW3. It seems to me there should have been a notice at the end of the show saying: “This was a paid political broadcast by the Citizens for Johnson.” How About giving Barry a chance–we do have a two-party system.
George Morriss
Cos Cob, Conn.

(I suspect there are plenty of people who feel the same way about all sorts of shows currently on the air these days, mostly on cable.)

There were two letters complaining about The Jack Paar Show:

The Jack Paar Show, Sept. 25: Mike Nichols and Elaine may in a scene from the obscene.
Mrs. Donald Huberty
Campbellsports, Wis.

Paar for the coarse. He hit an all-time low with two young no-talent comedians he presented in a backseat sketch, supposedly typifying current teen-age deportment. It was straight from the gutter.
S. John Schile
Missoula, Mont.

There were a few other letters, too, one of which pointed out that the pilots on 12 O’Clock High wouldn’t have been smoking king-size filter cigarettes, which apparently didn’t exist in the 1940s.

The 1964 World Series may have ended the previous week but the 1964 Summer Olympics were still underway and TV Guide published another full page list of highlights. There were again 15 minutes of highlights Monday through Friday from 11:15-11:30PM, as well as a two hour program on Saturday and hour long programs on Sunday, Tuesday and Friday. There were lots of finals, ranging from track to swimming to water polo and canoeing. Other sports for the week included roller derby, pro football, skiing, rodeo and pro hockey.

The final episode of The Steve Allen Show (also known as The Steve Allen Westinghouse Show) aired on Friday, October 23rd. The series was syndicated nationally and aired on WBZ-TV (Channel 4) out of Boston. As explained in the October 3rd issue of TV Guide, Allen’s commute between New York and Hollywood to accommodate both this series and I’ve Got A Secret played a big role in the decision to end the series.

There were again only two TV Guide close-ups this week:

That $2.50 cost for the Friday boxing bout is the highest price I’ve seen yet for a Phonevision program.

WHNB-TV, the NBC affiliate in Connecticut broadcasting on Channel 30 with a translator on Channel 79, premiered a local half-hour news editorial show called Starring the Editors on Saturday. The program aired from 7-7:30PM. This being 1964, all of the editors were white men, many of them old. Participants included Richard J. Murphy (from a paper out of Holyoke, MA), Frank F. Rosenau>Springfield Union, Edward J. O’Dea (Hampshire Gazette), and Robert W. Lucas (Hartford Times). 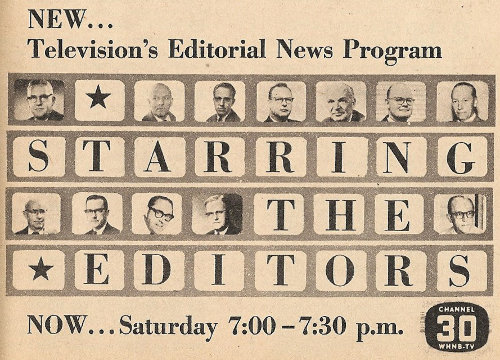 The two Springfield, MA stations — WHYN-TV (Channel 40) and WWLP (Channel 22) — took out half-page advertisements in this issue. WHYN-TV promoted itself as “The News Station” while WWLP called itself “Springfield’s Total Information Station.” Here are the ads: 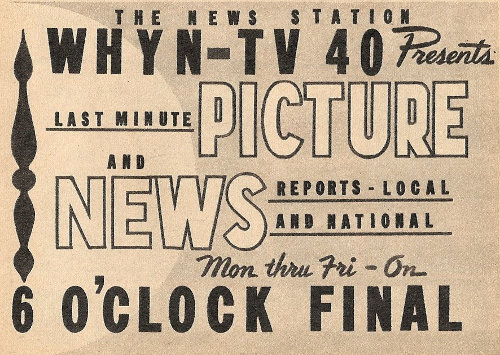 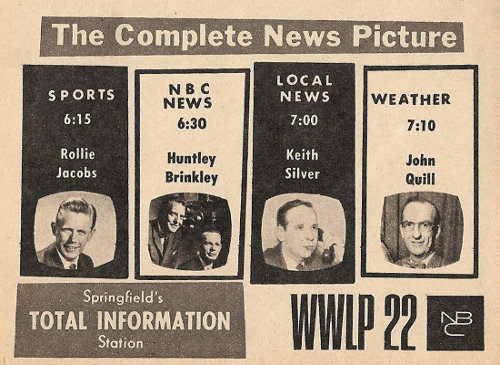