Today marks the 74th anniversary of the start of commercial television in the United States. The FCC designated Tuesday, July 1st, 1941 as the day TV stations could begin airing commercials. A handful of earlier advertising messages were either experimental or illegal. There weren’t a lot of television sets in use at the time and very few stations on the air. Only one, WNBT in New York City, was prepared to begin broadcasting commercials.

A total of four advertisers were on board: Bulova Watch Co., Sun Oil Co., Lever Bros. Co., and Proctor & Gamble. As with so much of early TV history, WNBT’s schedule for that historic day isn’t entirely clear. I’ve written about this in the past. Here’s my best guess:

There is some evidence to suggest that the USO program and Bottlenecks of 1941 (a revue) were either aired back to back or actually part of the same program. Records of audio recordings held by the Library of Congress indicate Uncle Jim’s Question Bee aired in between them, however.

The distinction of airing the very first official TV commercial goes to Bulova Watch Co. There’s an awful lot of confusion about exactly what that first commercial looked like. Some sources indicate it was just 10 or 20 seconds long and consisted of a map of the United States with a ticking watch on top and a voiceover stating “America runs on Bulova time.” There are even so-called “reconstructions” of the commercial on YouTube.

According to contemporary sources, Bulova aired two “time signals” on July 1st, 1941. Each ran a full minute and there was no map, just a test pattern with a watch face overlaid and a ticking second hand. Here’s a description from the July 6th, 1941 edition of The New York Times:

The first attempt to attract prospective customers was made under the sponsorship of a watch manufacturing concern, which paid $4 for the privilege of having a test pattern resembling a clock face flashed on the screen. The pattern remained on the air for a minute while the second hand traced its way around the dial. [1]

Bulova Watch Co., New York, opened and closed the day’s transmissions on this station with a visual adaptation of its familiar radio time signal. A standard test pattern, fitted with hands like a clock and bearing the name of the sponsor, ticked off a full minute at 2:30 p.m. and 11 p.m. for the edification of the viewers-in. This two-program contract also provides television’s first success story, for following the opening day’s test the sponsor immediately signed up for daily time-signals for the standard 13-week period. [2]

As further proof, Broadcasting published a photograph of the test pattern itself in its July 14th issue: 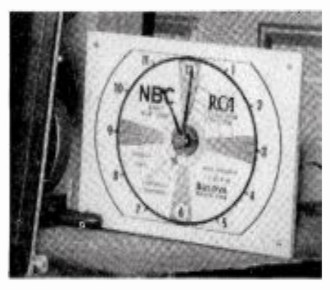 A similar image also showing the bulky camera can be found at the Early Television Museum website.

Will we ever know exactly what the commercial looked like? Perhaps not. There are no known visual recordings of the July 1st, 1941 programming. Additional photographs, perhaps even some taken of an actual television set, may yet come to light. The Library of Congress has a recording of Truth or Consequences, which reportedly closed out the night’s schedule, airing from 10:30-11PM. Hopefully it includes the second of Bulova’s time signals said to have aired at 11PM. At the very least, that would allow for confirmation of the length and what the time signal sounded like.